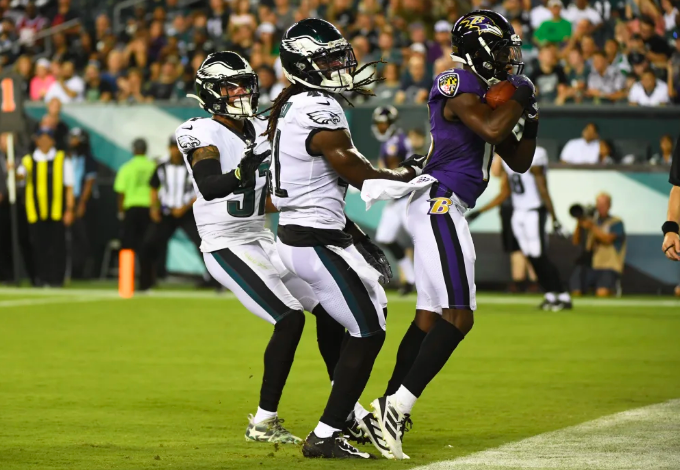 The Ravens are a full-go with their youth movement heading into the regular-season opener in Miami.

General manager Eric DeCosta deftly navigated a balance between having some experienced players that can help the team win this year, while adding a huge component of youth that will keep the franchise competitive over the long-term.

As its stands, there are 22 players on the 53-man roster that are entering their first or second year in the league. Of the 22, there are 10 rookies expected to make key contributions. Some of the second-year players — most notably Lamar Jackson, Hayden Hurst, Orlando Brown Jr., Mark Andrews, Anthony Averett, Kenny Young and  Bradley Bozeman — will push for starting spots.

Overall, there are 30 players on the final roster that are age 25 years old or younger.

The Ravens plan to overwhelm teams with their speed. The biggest question heading into the matchup against the Dolphins is with first-round pick Marquise Brown, who missed the majority of offseason workouts because of foot surgery.

Coach John Harbaugh expects Brown to be ready to play against Miami and that could change the entire dynamic of the game.

“He’s a rookie. He hasn’t had a lot of reps.” Harbaugh said about Brown. “He’s going to have to get up to speed quickly. We’ll have to be vigilant in what we ask him to do, things that he can do well. It’ll be a challenge for them, too, to cover him. He’s really fast. He has great hands. That’s the challenge the other way.”

In addition to Brown, the Ravens provided Jackson with some veteran targets in Willie Snead IV and Seth Roberts. They will be complemented by another rookie, Miles Boykin, who shined throughout training camp.

The other rookies that made the final roster are quarterback Trace McSorley, running back Justice Hill, offensive linemen Patrick Mekari and Ben Powers, linebackers Otaro Alaka and Jaylon Ferguson, defensive lineman Daylon Mack and cornerback Iman Marshall, who was placed on injured reserve.

Both Alaka and Mekari were the latest undrafted rookies to make the 53-man roster. The Ravens have kept an undrafted player for 16 consecutive seasons, a badge of confidence for the franchise. Mekari represents a burgeoning trend in the NFL, players able to play multiple positions (center, guard and tackle), which saves roster spots.

One player that is not part of the team’s plans is defensive tackle Willie Henry, who was one of the surprises cuts. Under DeCosta, Ravens are going to be more critical with players playing in the final final year of their rookie deals. Players that don’t perform up to expectations will be jettisoned to make room for the new breed of players.

The Ravens opened the week 6.5-point favorites in Miami. That’s showing this young team much respect for a road game. The Ravens will also be favored for their home opener Sept. 15 against Arizona, and then the schedule gets tougher with games against the Kansas City Chiefs, Cleveland Browns, and Pittsburgh Steelers in consecutive weeks.

“[It’s like the] Donald Rumsfeld quote from a few years back: You have to know what the unknowables are, and you can’t worry about them too much,” Harbaugh said. “I don’t know what’s going to happen on Sunday. We don’t know how certain things are going to look or how guys are going to respond. We might have confidence.

“Whatever happens, we’ll deal with it. But that’s the beauty of it. That’s what’s exciting. That’s the drama. We’re going to go out there and find out a lot on the first Sunday. We’ll come out of it, and there will be a lot of good things that we can build from, but there will be a lot of things that aren’t good that we’re going to have to get straightened out. That is knowable. I do know that. We’ll have to see what those things are.”

This is going to be a new generation of Ravens that are going to enter the 2019 season in a whirlwind.