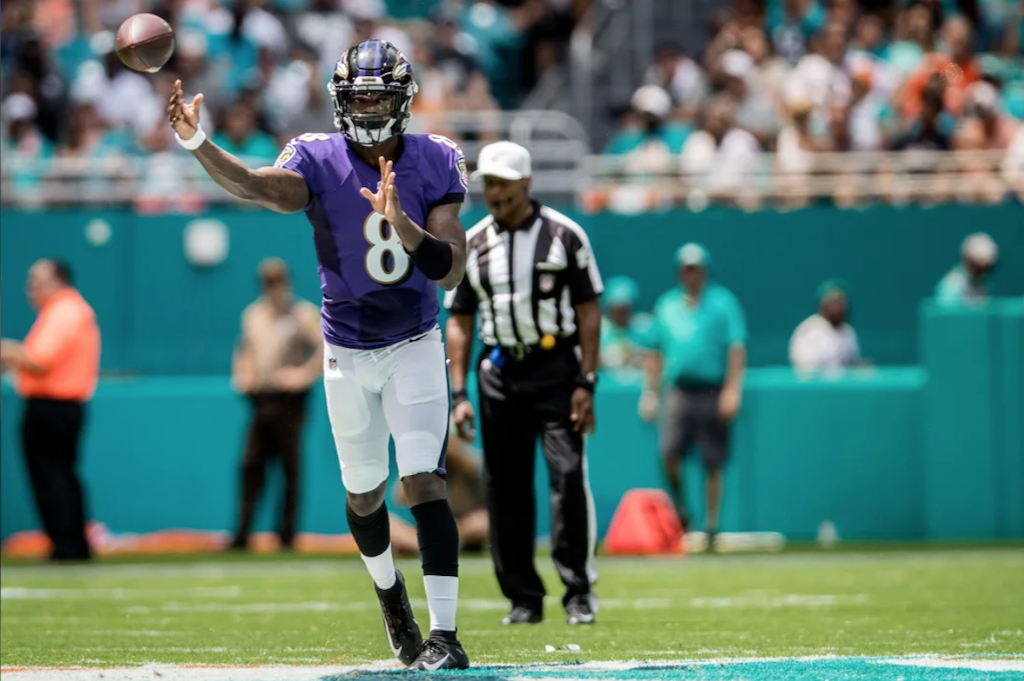 Despite the big plays, this was one my favorite throws from Lamar. Why? Because of the situation. 3rd & 14, backed up in your own terriory. Obvious passing situation. Lamar delivers with timing & accuracy. 3 steps off the hitch – ball on the money in the seam vs zone coverage. pic.twitter.com/ZstoJf969p

Once Upon a Time in Hollywood

Speed stresses defenses & individual defenders. See how soon the CB opens up vs Brown? He may be walling off inside so this could be the technique he’s coached to use, but it causes him to have to flip his hips in order to react to the slant. Missed tackle vs speed = house call. pic.twitter.com/ELTIvnRzfc

Fitzpatrick is playing 12 yds off Brown, makes contact but is flat-footed. Again, this is another way speed stresses a defense. Even with a 12 yd cushion, if you play a guy with Hollywood’s speed flat-footed and don’t do enough to disrupt his route, it can be a house call. pic.twitter.com/VScEoggbSQ

Another good tackle on KR by Trawick. Watch him hit the blocker with an open field cross-over then make the tackle. Rosburg used to say ST is a space game. How guys operate in and leverage that space says a lot about them. pic.twitter.com/PfZJD2spxj

You know I have to throw in a couple of ST plays. Watch Elliott strike a blow, maintain his balance, redirect and make the tackle. Plays like a heat-seeking missle. pic.twitter.com/aaIZ2RtWRA

In the locker room after the game, Judon talked about how the Ravens won their 1v1s. Watch him do that here vs the RT. Beat the hands, beat the man … for a sack. pic.twitter.com/Ku7M2c39Kx

Time of a Ravens defense thread. Here are some plays that caught my attention (in no particular order). Love the way Judon sniffs out the screen and lays the wood. Reminiscent of Suggs. pic.twitter.com/3B2B6HuQCC

I Believe I Can Fly, by Earl Thomas

From the EZ angle you can see Earl floating throw the air like MJ in his “Come Fly with Me” video back in the day LOL. Sorry for cutting his return off the clip. It made the clip too long to load. pic.twitter.com/julyyHu9Fk

Earl Thomas flashing the entire package on this 1st regular season series as a Raven. Instincts, range, ball skills and return ability. Come from the opposite hash to make this INT. pic.twitter.com/fMODtysCNj

Replay angle of Marlon Humphrey’s INT in Q4. Flips his hips and drives to undercut the route. Great play by Marlon but the WR doesn’t do his QB any favors either. Would like to see him come back downhill more to cut off the CB’s angle to the ball. pic.twitter.com/jPgZ79NohU

The Development of Tyus Bowser and Tim Williams

Nice rush by Bowser vs the RT. Gets inside hands then works the dip & rip. Draws a holding penalty that erases a 19 yard completion. pic.twitter.com/Y9iDRcngeg

Good knock back by Brandon Williams vs the LT. Strikes, locks out & finds the ball carrier. Nice job setting the edge by Tim Williams. Works to keep outside leverage and is able to force the RB back inside to this help. pic.twitter.com/vI1JYgXLgI

Check out the range Tony Jefferson shows on this play. From in between the hashes to outside the numbers. Smooth transition out of his pedal and a good angle to the WR. Then arrives with bad intentions & separates the WR from the ball. pic.twitter.com/NmQYnyDICO