Alright folks, exhale. The Ravens advance to 2-0 and remain atop the AFC North. Mission accomplished.

Many said this game had ‘trap game’ written all over it and, well, as my good friend Tony Stark says…

Trap game or no trap game, these are good lessons for a young offense to learn early. Let’s walk through and see who gets to go out for recess early and who got detention (spoiler alert: the DBs are in detention indefinitely).

It was the Lamar Jackson show on offense. The Ravens had 440 yards total offense and Lamar contributed 272 yards through the air and 120 on the ground for 392 total yards.

Some of the encouraging statistical notes are 7/14 on 3rd down and 37 minutes of possession.

Some of the not-so-encouraging notes are only seeing 17 carries to Ravens running backs and settling for 2 field goals in the second half.

Jackson on Jackson – A-

Lamar had a bit of an up-and-down day through the air. He had some really nice connections, but a few misses (and yes, that Mark Andrews overthrow would have gone for 6). This is going to happen as he continues to develop.

The encouraging thing? His ability to use his legs to get the running game going and his clutch-ness. Say what you want about Lamar, but the kid is a gamer and shows up for the 4th quarter with his big boy pants on.

The 41-yard connection to Marquise Brown was a thing of beauty and sealed the game.

The nice thing about his running was that it came at times where the offense was getting stalled and it seemed to keep injecting a little fire in the group.

Lamar saw 8-9 in the box a lot, but hung in the pocket, went through his progressions and was only running on designed runs or when he had an open lane and could get down or out of bounds. That’s exactly what you want to see.

Another encouraging day for the young QB who is now 41/57 on the year for 596 yards and 7 TD. Oh yeah, and 0 INT or fumbles…not bad for a running back!

It was a quiet day from the running back group. Not only did they see very little action on the ground, but they weren’t particularly effective. We’ll get into the offensive line later, but let’s be real, they didn’t help.

It felt like Gus Edwards could have been used a little more, but the bulk of the work went to Mark Ingram who compiled just 47 yards on 13 carries. Edwards added 11 on 3 and Hill 5 on 1.

That said, the RB group did help in the passing game, which included a 20-yard completion to Ingram and a 10 yarder to Justice Hill.

The production isn’t what impressed me, but the fact that we’re seeing RB’s out in routes and not just curls out of the backfield for the check-down is what, I think, we all want to see.

Last week we were treated to a little preview of what Marquise ‘Hollywood’ Brown could do down the field.

This week we were treated to what he can do in the short passing game. Before the 41 yarder that locked up the game, Brown had 7 catches for 45 yards. On its surface, not very impressive. However, it’s great to see that Greg Roman believes he can be effectively navigate the entire route tree. I think we have a good one here folks. 12 catches through 2 games far exceeds my expectations.

Miles Boykin, man, you have to stop dropping that dang ball! The preseason was not kind for drops and Boykin had another one on Sunday. He did add a nice 11-yard catch (which was all hands), but still, he has to get the drops under control.

Overall, Brown stole the show, and it’s safe to say the Ravens have some playmakers at WR!

Oh boy, we have to have a conversation about Matt Skura. I like the kid, and he works really hard, plays smart and has definitely developed a strong understanding of the C position. That said, he’s just not that good.

Too many times he’s getting pushed back in pass protection or not getting any push at all in the run game. His snaps are still not great either, which was a concern last year.

Bradley Bozeman did get clowned by Corey Peters who had a free shot on Lamar, but you’re asking a natural C to play LG. Similar to when former Raven Ryan Jensen tried to play OG, he struggles in space.

I said before week 1 that I thought the optimal LG-C combination with Ben Powers-Bradley Bozeman and I stand by that.

A week after Ronnie Stanley got flagged twice for holding, Orlando Brown Jr. drew 2. Outside of that I thought both played well against a really strong pair of edge defenders. Stanley, in particular, dominated Terrell Suggs in pass protection, and Suggs only had 3 tackles. Jones only had 1 tackle and neither had a QB hit or sack. Strong day from the bookend OT’s, which does give the group grade a bump.

Well, Mark Andrews is pretty good at football. Another 8 catch day, this one going for 112 yards and a TD. Andrews should have had another one, but Lamar overthrew him. Andrews has quickly become the Ravens best pass catcher and looks like an absolute stud.

Hayden Hurst scored his first TD on his only catch of the day and Nick Boyle had 1 grab for 14 yards.

Upset about Hurst being a 1st rounder? Just pretend Andrews was the 1st rounder and Hurst the 3rd rounder. Is that how it works? No, but trust me if you follow this advice you’ll feel much better!

This one is a tough grade.

On one hand, the pass rush was weak when you consider how much we blitzed, the DBs couldn’t cover a peewee pop warner team and Don ‘Wink’ Martindale didn’t call a very good game.

Don’t get me wrong, I love Wink, but why are we still blitzing when we’re not getting home and they’re getting the ball out quickly to toast our DBs? Just didn’t make sense. 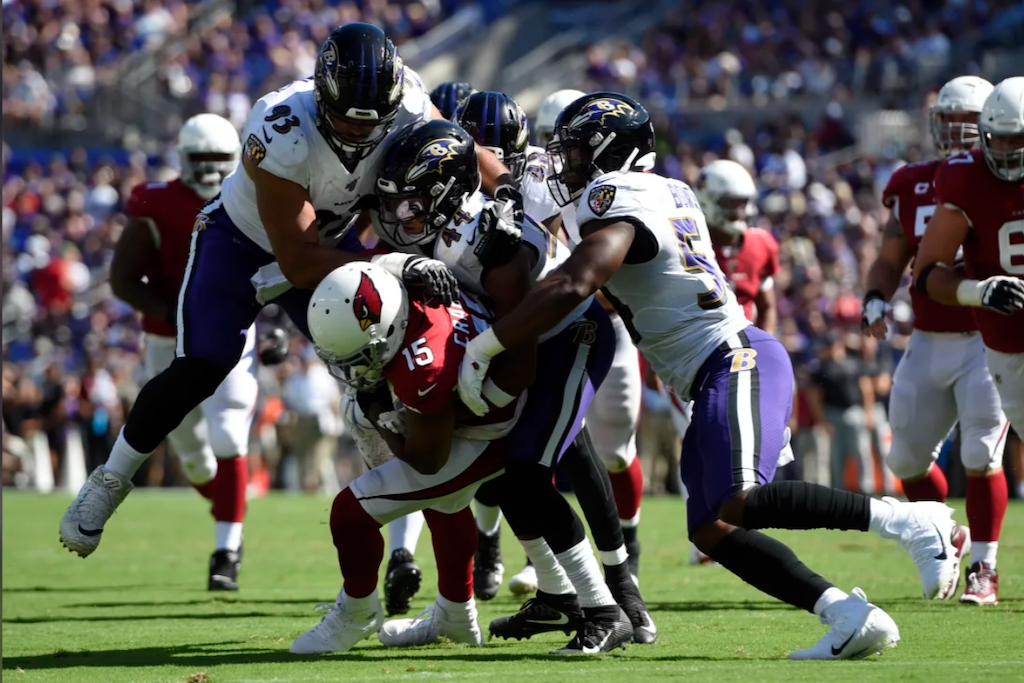 While I wasn’t very pleased with the performance of the pass rush, I was impressed with Matt Judon’s performance. He brought home a sack and had 3 QB hits to go with some solid SAM LB play off the line of scrimmage.

The combination of Tyus Bowser and Tim Williams didn’t shine at first glance, but Pernell McPhee played well from the interior spot.

Michael Pierce and Brandon Williams did a good job again of controlling the interior line in the run game. The Cards did only run 11 times, but there wasn’t anywhere to go when they did.

Overall, they were one of the bright spots.

This is another tough grade because I just didn’t really notice Patrick Onwuasor, Chris Board or Kenny Young.

It did appear we played a lot of dime with Anthony Levine coming onto the field.

Peanut is usually all over the ball, but with the Cards throwing on 80% of plays, it was all about the DBs today.

Oh man, what a disaster.

Before we get into this, I think we all need to take a step back and remember that the Ravens are playing without 2 of their 3 starting corners. The very fact that Brandon Carr can step in as a starter is some evidence that we did have some good depth.

However, when you’re losing that many starters, there’s really not many defenses in the NFL that can cover for those players.

That said, it was just a bad game for this group. I had to double check to make sure we didn’t have Frank Walker out there in disguise.

Anthony Averett and Brandon Carr both got hit with a couple of plays that Kyler Murray basically just threw up in the air, but neither had their head turned to the ball to know where it was.

This group was meant to be our strength, but with the injuries and unsure play it’s looking like the weak spot.

I will acknowledge that with so many blitzes, it wasn’t like they were given a lot of schematic help and most were left 1-on-1, but the massive chunk yards and guys running wide open is not good.

Wink is going to have to dial up something more creative next Sunday when the team heads to KC to take on the league’s reigning MVP, Patrick Mahomes.

One of the quiet guys who is making positive plays every time they touch the ball is Cyrus Jones. He has 5 returns on the year for a 15-yard average. I know some aren’t a fan of having ST-only guys on the team, but he’s a good one.

Oh yeah and Justin Tucker and Sam Koch booted the crap out of the ball. Shocking, I know.

Mark Andrews made a big case for the game ball, but I have to give it to Lamar Jackson. I don’t think the Ravens offense keeps moving without his legs.

This is two weeks in a row where it was basically 1A – Lamar and 1B – Andrews.

Some will be upset, but I gotta give it to the most valuable guy.

Shout out to Andrews though. Dude is a beast.

Cole Jackson has been an avid follower of the Baltimore Ravens for over a decade. Born and raised in Brockville, Ontario, Canada, Cole’s love for the Ravens was born and bred in following the playing style of Ray Lewis, which he tried to emulate in his own football career, (ultimately failing to do so). Cole graduated from the University of Ottawa with a degree in Criminology before becoming a Policy Analyst with the federal government. Cole’s football career now involves being a columnist for RSR, yelling at others who are beating him in Madden and being a regular on the RSR forum where he is known as GreatWhiteNorthRaven. Cole has a knack for the team-building aspects of the Ravens, which includes player scouting, free agency and the draft.