— The two games I pegged as “locks” were frustrating to watch. The Chargers missed two relatively short field goals that would have had them covering and Philip Rivers threw a late interception to seal the loss for me. My other pick was Chicago. After a Joe Flacco pick deep in Chicago territory with around four minutes left, I thought this one was in the bag. Fast forward a few minutes and the Broncos not only score, but decide to go for two, which just about squashed any chance of a cover for me.

— It’s true what they say. You dress for the job you want, not the job you have. Cam Newton must want to be selling clothes in the geriatric section of the local JC Penny because he looked and played like an 80-year-old woman. Sorry, I’m a little salty because this game also lost me a pick in my survivor pool.

— You can never predict injuries and there were two big ones in Week 2 with Drew Brees and Ben Roethlisberger going down early in their games. This killed my side of each game.

Not a bad week after totally bombing Week 1. 8-8 won’t win you much, if any, money, but we’re trending in the right direction now.

Now that we have a little bit of data, here are the stats so far this year as to how teams are doing with respect to the spreads: 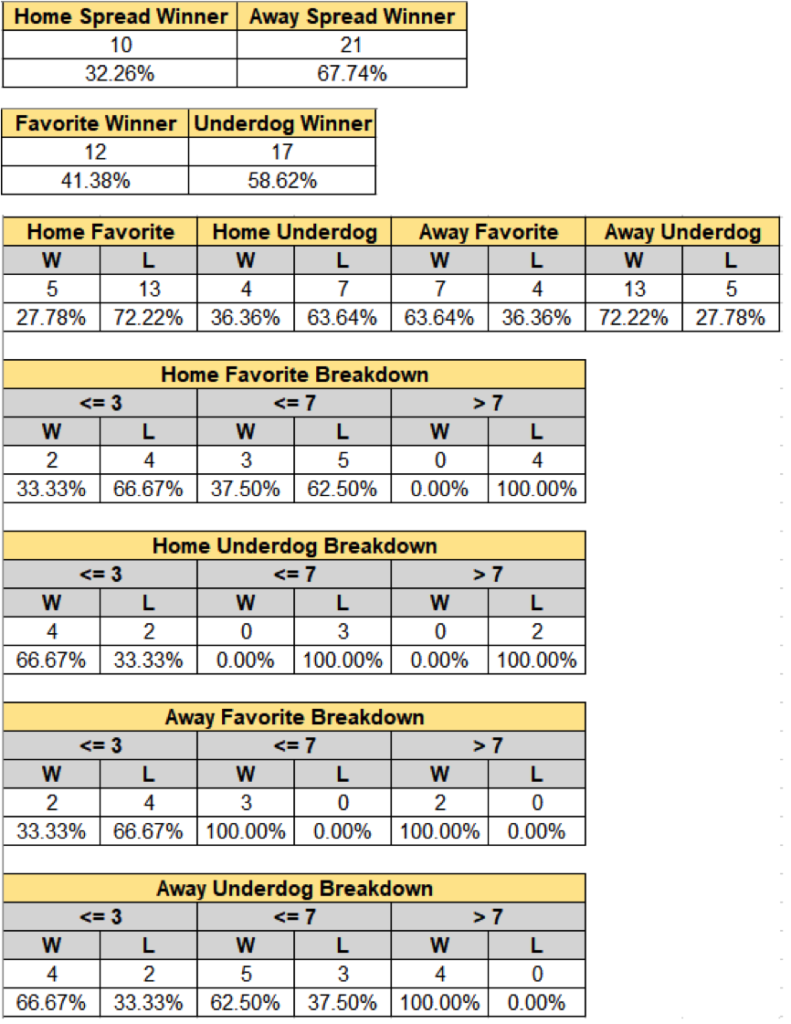 After Week 3, I’ll be putting out my ATS standings. I’ll put these out each week and it will give you an indication as to how each team is doing ATS this season.

There are several interesting lines for me this week and this is the first one. Tennessee is going up against a Jags team starting their backup quarterback and even though they struggled last week against Indianapolis, their defense should be able to limit Jacksonville. The Titans are closer to who they were in Week 1 against Cleveland than who they were in Week 2 against the Colts. I see them winning by a touchdown and easily covering the 1.5 points.

Before looking at the spreads, I pegged this as a -3 spread in favor of the Chiefs. I think missing Tyrek Hill against a solid defense in Baltimore will cause Patrick Mahomes to struggle more than he’s used to. I do see Kansas City still winning this game, but it’ll be close.

On the offensive side of the ball, Lamar should be able to do what he pleases against a below average Kansas City defense. For the Ravens to steal this game, Jackson will have to limit turnovers as he has all season. If nothing else, it will be fun to watch.

I like the under here as well. This game opened up at 51.5 and is already up to 55 as bettors hit the over hard. I don’t see the fireworks here that other people do. I put it in the 45-48 point range, which will easily get under the total.

Denver lost a heartbreaker to Chicago last week as they went for two to take a late lead only for the refs to act like psychics and allow the Bears to call a last-second timeout. Green Bay, on the other hand, looked great in the first quarter against the Vikings and then held on for the rest of the game. When the Packers are good, they can be great, but they aren’t very consistent at this point of the season.

Eight points is just a lot for me here. The Denver defense is above average and Green Bay has shown nothing yet this season that they can be counted on to put together a complete 60 minutes. Green Bay wins, but Denver covers.

I’m going to throw my hands up on this one. I have no idea who either of these teams are at this juncture of the season. I picked Atlanta as my NFC South champion and the developments of last week make me think that’s a real possibility. Their defense isn’t great, but they’re improved. Their offense has the ability to be explosive, but they rarely are.

The Colts have been as impressive as you could ask for without Andrew Luck this season. I’m just not entirely sure I trust them yet to cover in this spot. I’m more willing to put my money down on Matt Ryan and Julio Jones. I’m picking Atlanta to win outright.

Cincinnati looked impressive in Week 1, but were overmatched in Week 2 against the 49ers. Buffalo is 2-0 with two road wins to open the season. To say the crowd will be into this game in Buffalo is an understatement. The Bills Mafia will be out in full force and that raucous environment will spell trouble for Andy Dalton and co. Buffalo will be able to win this one handily.

Since 2008, these teams have alternated spread winners. Cincinnati won in their last matchup in 2017, so that means Buffalo has to win this one, right?

Dating back to last season, Buffalo has won four straight ATS. Cincinnati is 6-3 ATS in their last 9 road games with a -6.1 average point differential.

It’s hard to win in this league without a quarterback and the Jets proved that last week. They weren’t a good team to begin with, but when you take away their top two quarterbacks, all bets are off. This game shouldn’t be close, but it is a divisional game so you have to take that into consideration even if the Jets are shorthanded.

My score predictor isn’t smart enough to take into account things like injuries so the fact that it still has this as a 16-point win for New England points me in their direction here to cover.

Philadelphia comes home for their home opener after a disappointing loss to the Falcons on the road last week. They took a late lead only to have Matt Ryan mount a comeback. With the Cowboys starting 2-0 and with a home game against Miami this week, the Eagles can’t afford to lose this one against Detroit.

This is another game like the Bills game where I see the home crowd having a big effect. The Linc will be loud and cause issues for Matthew Stafford and the Lions offense. I like the Eagles by 10 (and the under).

Detroit is 4-1 ATS in their last 5 games against the Eagles with a 3.6 average point differential.

The Raiders started out hot against the Chiefs but that went south quickly in the second quarter. Conversely, the Vikings struggled early but rallied last to give the Packers a game at Lambeau field, but ultimately fell short.

The Vikings will give Oakland a heavy dose of Dalvin Cook and their defense will force Derek Carr into a pick or two and win easily.

That being said, 21 points is a lot in the NFL. Still, I can’t justify picking Miami as they’ve been outscored 102-10 in the first two weeks of the season. I’m going to stay away from this game personally, but I’m going to pick Dallas because, well, they’re not Miami.

This one is simple. If Jameis Winston doesn’t turn the ball over, he’s probably a top half of the league quarterback. If he does turn it over, he’s bottom 10. His inconsistency makes this game not worth betting on.

From the Giants’ perspective, they can win this game if they are able to force Winston into some of those famous turnovers and feed Saquon the ball. If they don’t, it will be another long day for them.

If this game happened a week ago, I think the spread would have been upwards of a touchdown in Carolina’s favor. Then last week happened when Carolina looked inept and Arizona showed promise in Baltimore and the spread came out at 2.5 points.

You’re not supposed to look at just the prior week and make a pick when betting NFL games, but it’s hard in this instance. Arizona stood toe-to-toe with the Ravens and almost took them down at home. If they can duplicate that performance this week, they’ll win outright against old lady Newton.

I like Arizona to cover and the over in this one.

Regardless of who’s at quarterback in Pittsburgh, they are not seven points worse than the 49ers. Their defense is still solid and should be able to keep San Francisco at bay (pun intended) this week.

Mason Rudolph will be taking over for Big Ben this week. I loved Rudolph coming out in the draft and was hoping the Ravens would pounce on him in the second round of last year’s draft (until they drafted Jackson). He won’t be Roethlisberger right now, but he’ll be good enough to make this team serviceable.

Pittsburgh wins this one outright to move to 1-2.

The Chargers were my Super Bowl pick before the season started. Through two weeks, they’re making me reconsider. They haven’t looked anything like the team that came into Baltimore last January and beat the Ravens in the playoffs.

Houston also hasn’t looked great after a last second loss to New Orleans in Week 1 followed by squeaking out a win in Week 2 against Jacksonville. This game may show us who has the potential to make a run this year, and who doesn’t as both of these teams were thought of as playoff caliber.

How much do you trust Teddy Bridgewater? For me, the answer is not very much. New Orleans is going to feel the hurt from the Drew Brees injury and it starts this week. Seattle went on the road, across the country and beat the Steelers last week and should take it to the Saints without Brees.

Cleveland looked good in Week 2, but that was against a Jets team without Sam Darnold. The Rams, on the other hand, have had two weeks of solid performances under their belt and that will continue this week. They will be able to shut down the running game and in-turn be able to shut down Baker Mayfield and their receivers. I love the under here in this game.

Chicago has burned me the first two weeks. I had them as my NFC representative in the Super Bowl this year, but their offense will be their downfall. However, this week, I’m going to once again back the defense and that I don’t think Washington will be able to put up points against the Bears. The offense will do just enough to cover. I like the under here as well.

Chicago is 0-4 ATS against Washington in their last 4 meetings with a -7.5 average point differential.