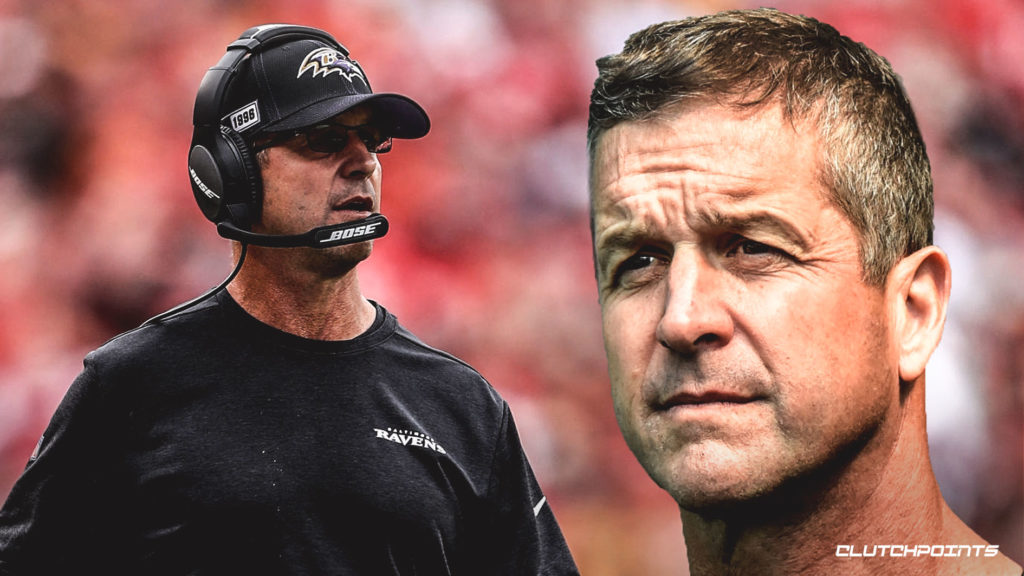 All were primary topics of conversation following the Ravens 33-28 loss to the Kansas City Chiefs. Quantitative arguments can be made in support of John Harbaugh’s calculated decision making. Others may argue that there’s an intuitive aspect of coaching that is lost when relying solely upon statistical expectation.

Ideally, a coach will use the analytics as a tool, massaged in part by his gut feel for the ebbs and flows of the game and how his team is responding to the surroundings and their opponent on any given Sunday.

When we learned back in April, that Patrick Mahomes & Co. in KC would be the Ravens week 3 opponent, most expected a loss. After all, the Chiefs were a questionable call from representing the AFC in Super Bowl 52 and their quarterback is the league’s reigning MVP. Arrowhead is a tough place to play and it was the Chiefs home opener. Add it all up and you get the 6 ½ point line that Vegas pegged for the game.

Yet despite the odds, despite some questionable analytics driven decision making, despite a bad outing by Lamar Jackson, despite a sieve of a secondary and despite a wretched officiating crew that gifted the Chiefs with some home cooking, the Ravens were one successful possession away from taking the lead and perhaps stealing a big win.

What was the single biggest contributing factor to the Ravens 33-28 loss to the Chiefs?

• Heading into the game, the plan was clear – or at least it should have been. Take the air out of the ball by exploiting the Chiefs porous run defense and in doing so, take out the crowd and keep the dangerous Mahomes on the sideline. Yet the Ravens came out a little pass happy. Maybe it was a matter of taking what the defense was giving but there seemed to be too many low percentage pass plays on first down that left the Ravens staring at second-and-long situations. That limits the playbook.

• The secondary was supposed to be one of the team’s strong points. So far it looks like the team’s weakest link. Earl Thomas sure does talk a good game but I asked myself several times yesterday, “Where’s ET?” The communication breakdown on the Mecole Hardman 83-yard score was an embarrassment.

• Travis Kelce is a great tight end. But to see him so wide open too often is a bit disheartening. How the Ravens entered the game without a plan to contain him was a bit of a shock. Kelce had 6 catches for 75 yards by halftime. To their credit the Ravens did hold Kelce to just one catch after the break.

• Just as they did in the matchup in 2018, the Chiefs benefitted from some really close plays. CLOSE PLAY NO. 1: The Chiefs had the ball on the Ravens 47 facing a second-and-10 and they dialed up a swing pass left to Hardman. The Ravens looked like they had it diagnosed perfectly. The pass was tipped slightly by Tyus Bowser behind the line of scrimmage. Marlon Humphrey closed on Hardman for what would have been about a 4-yard loss but missed the tackle at the KC 49. The speedy receiver then reversed his field and picked up 14 yards to the Ravens 33. Three plays later it was 14-6 Kansas City.

• On their next possession the Ravens faced a first-and-10 from their own 37 at the 6:34 mark. Gus Edwards busted out a run down the right sideline for 45 yards to the Chiefs 18. It was called back for holding on Willie Snead. Another of several bad calls on the day from John Hussey’s inept crew. Three plays later the Ravens punted, still down 14-6.

• CLOSE PLAY NO. 2: Fast forward to 6:21 of the third quarter with the Ravens trailing 23-13. On first-and-10 from their own 20, Mahomes scrambled and then threw downfield to Sammy Watkins. Patrick Onwuasor was in great position but mistimed his leap a bit just in front of Watkins. The ball grazed Onwuasor’s fingertips and landed in the hands of Watkins. The play went for 36 yards and it would help set up another Kansas City touchdown.

• On this same drive Tony Jefferson was flagged for DPI as Brandon Carr picked off Mahomes at the Ravens 11. I’m still waiting to see the DPI and at that point of the game (3:16 mark of the 3rd quarter) trailing by 10, I was shocked that Harbaugh didn’t challenge the call.

• Again, on the same drive, Onwuasor was tackled from behind while pursuing Mahomes on a screen play that went for a 14-yard score to LeSean McCoy. More home cooking for one of the NFL’s darlings. 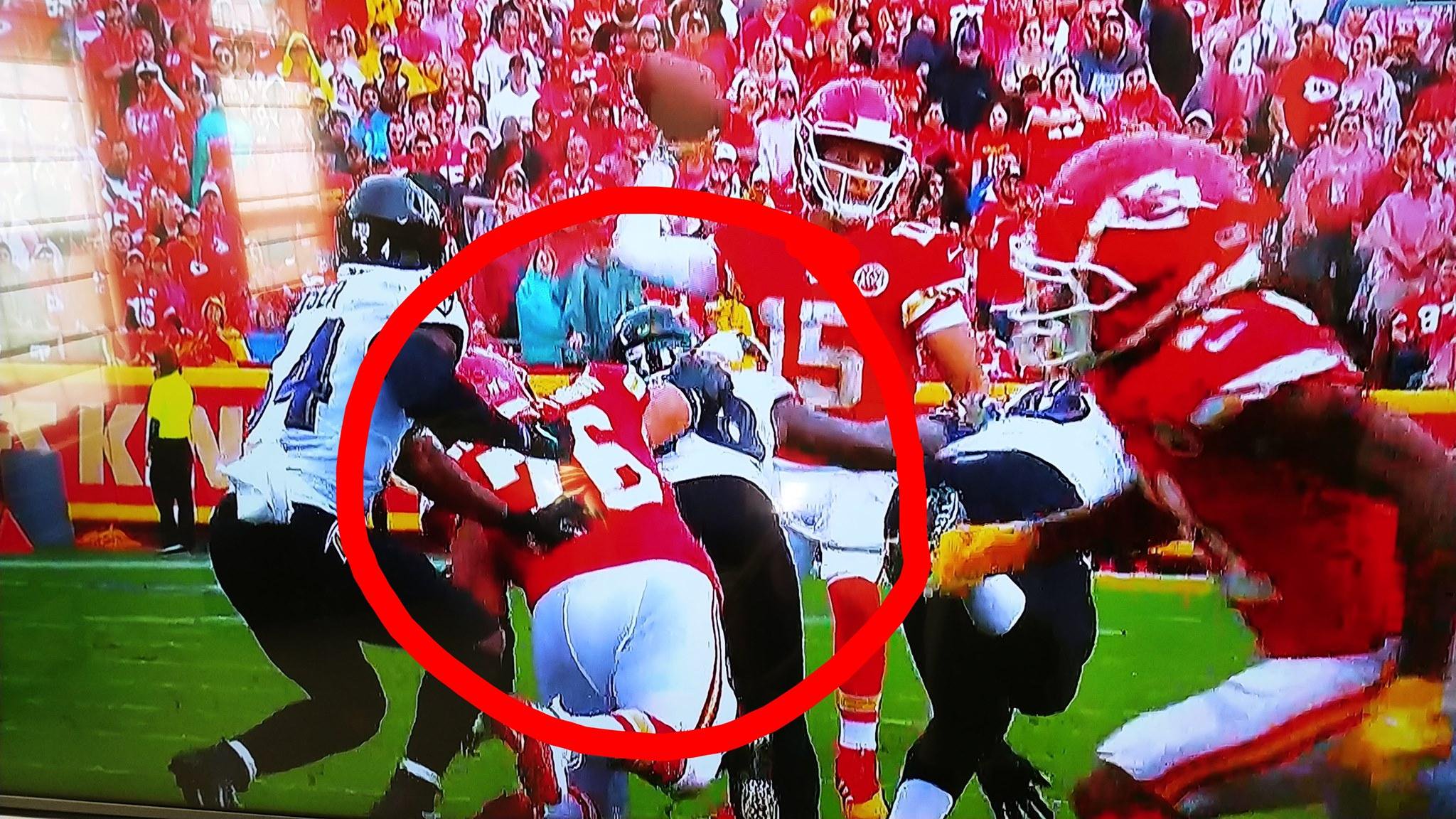 • With 9:21 left and facing a second-and-10 at the KC 32, Jackson hit Chris Moore on a little swing pass that was actually thrown backwards, and therefore technically a lateral. The play went for 11 yards but it was called back for an OPI penalty on Miles Boykin. Instead of first-and-10 from the KC 21 the Ravens faced a second-and-20 from the KC 42. They would eventually settle for a field goal. The play should have been challenged by Harbaugh. A lateral that would have been confirmed via review, would have negated the OPI.

Here’s an angle of the Miles Boykin OPI.

Doesn’t even look close. It was a backwards pass and should not have been a penalty. Good find by @Yoshi2052 @NFLOfficiating maybe this one can go in a power point as a ‘don’t call it if this happens’ slide? pic.twitter.com/7UEouKn8YE

• Justin Tucker’s last kickoff was a bit innovative. Down by a score and with 2:01 left on the clock Tucker drop kicked it to the Chiefs. If the Chiefs fielded the ball and then tried to advance it, the Ravens could have blown the play up and recovered it. If the Chiefs call for a fair catch, then there would be no time elapsed on the play, just as if Tucker had kicked it through the Chiefs end zone. But this smart play provided options and it served as another timeout for the Ravens thanks to the 2-minute warning. Judging from the reaction by Tucker, he probably didn’t mean to kick it so deep but the play was clearly inventive.

This was one way to save a timeout

• At the end of the day, Harbaugh’s analytics will be closely scrutinized and criticized. Maybe he’s right and over the long haul, the analytics bear out. And while he’s reducing such decisions to scientific ones, maybe art plays into such choices as well. And maybe they should be a bit more creative with the play calling on two-point attempts. That then, might complement the science component.

The Ravens can build upon this loss. Time will tell if they’ve learned from its inherent lesson, one that came without a price since every team in the AFC North took a loss on Sunday. And with three consecutive games against divisional foes, the Ravens have an opportunity to seize control of the North just six games into the season.

Now that’s the kind of math we can all get behind.