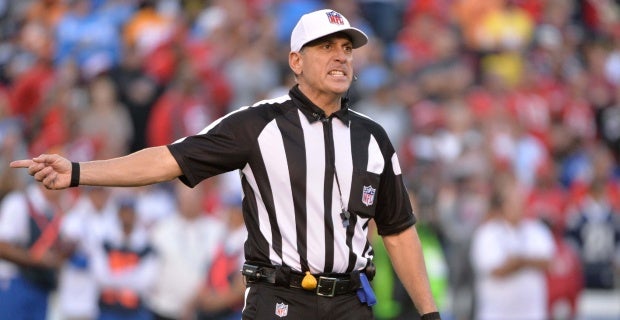 Bad Officiating in The NFL is an Epidemic!

Actually, this is not a newsflash.

Officiating in the National Football League is pathetic. Bad officiating in the NFL has become a way of life. Officials throw unwarranted flags that strip away big plays and then they fail to penalize obvious infractions that tilt the balance of fairness. I haven’t watched a single game this season, a Ravens game or otherwise, that hasn’t featured a blatant error by the men (and woman) dressed like zebras.

Publicly, you will hear players and coaches say things like, “If we do our jobs, penalties don’t matter.” But that’s just spin. Penalties do matter and we only need to take a look at the Ravens visit to Kansas City for proof. And today, we’ll do just that in this new piece that we’ll call Hochuli’s Heroes.

You probably remember former referee Ed Hochuli, one of the NFL’s best who is now retired. His son Shawn has taken the baton from dear old Dad but unfortunately, he’s fumbled it more than former Ravens punt returner Lamont Brightful. Like many of his colleagues, Shawn is awful and can be found after games icing down his throwing elbow. Hochuli’s Heroes is intended to point out the flaws of the NFL’s fun police on a weekly basis.

Hochuli’s Heroes will focus on the Ravens but we’ll also include officials’ follies from other games, if warranted.

[Related Article: Do The Math]

So, without further ado, here are Hochuli’s Heroes, Week 3…

Facing a 3rd-and-6 from the Ravens 28 with 3:16 left in the third quarter, the Chiefs led 23-13. The Ravens needed to force a FGA to keep it a two-score game. They did one better than that when Brandon Carr intercepted Patrick Mahomes at the Ravens 11-yard line. But it would not stand as safety Tony Jefferson was flagged for pass interference.

Still waiting to see the DPI on this play. More home cooking for the #Chiefs. pic.twitter.com/OO3SlEDyQB

No Penalty for Peanut

Two plays following Jefferson’s DPI, the Chiefs faced a 2nd-and-9 at the Ravens 14 with 2:15 left in the third. If there was ever a blatant holding penalty, seen by everyone except for those paid to police such things, this is it…

Trailing 30-19 with 9:21 left in the game, the Ravens faced a 2nd-and-10 from the Chiefs 32. Off of motion, Lamar Jackson hits Chris Moore on a swing pass that was technically a lateral. The play went for 11 yards and gave the Ravens a first down at the Chiefs 21. Or so we thought…

On the play Miles Boykin was flagged for offensive pass interference. First of all, OPI CANNOT occur if a lateral takes place. Secondly, even if one argues that this wasn’t a lateral (clearly it was), by definition, OPI occurs when there’s intentional physical contact with a defender, between the snap and the first touching of a forward pass, in order to hinder or prevent him from catching or defending the ball. There is a 12-yard gap between the ball and the Chiefs DB when Moore makes the catch. It is highly unlikely that he could make a play on the ball.

In any sport, consistency is a key component to in-game officiating. Consistency helps players to adjust to the way a game is being called.

Now you’ll recall the hold on Patrick Onwuasor that was ignored on the 14-yard TD pass to LeSean McCoy above. Earlier in the game, a marginal at-best hold was called on Ravens WR Willie Snead that negated a 45-yard run by Gus Edwards. The play represented a huge swing in momentum with the Chiefs leading 14-6. Instead of a 1st-and-10 at the Chiefs 18 at the 6:34 mark of the 2nd quarter, the Ravens faced a 1st-and-17 at their own 30. Three plays later the Ravens punted and, on the ensuing drive, the Chiefs took a commanding 20-6 lead.

Consistency is key. This John Hussey crew had none of that.

Hopefully the Ravens won’t see this merry band of blind mice until 2020.

By the way, have the Chiefs become the new darlings of the NFL?

I Can See For Miles and Miles

But apparently the official standing in the end zone can’t see 15 yards in front of him. Unbelievable!

This is an EGREGIOUS missed call against Miles Sanders pic.twitter.com/Os6Vp3MjSz