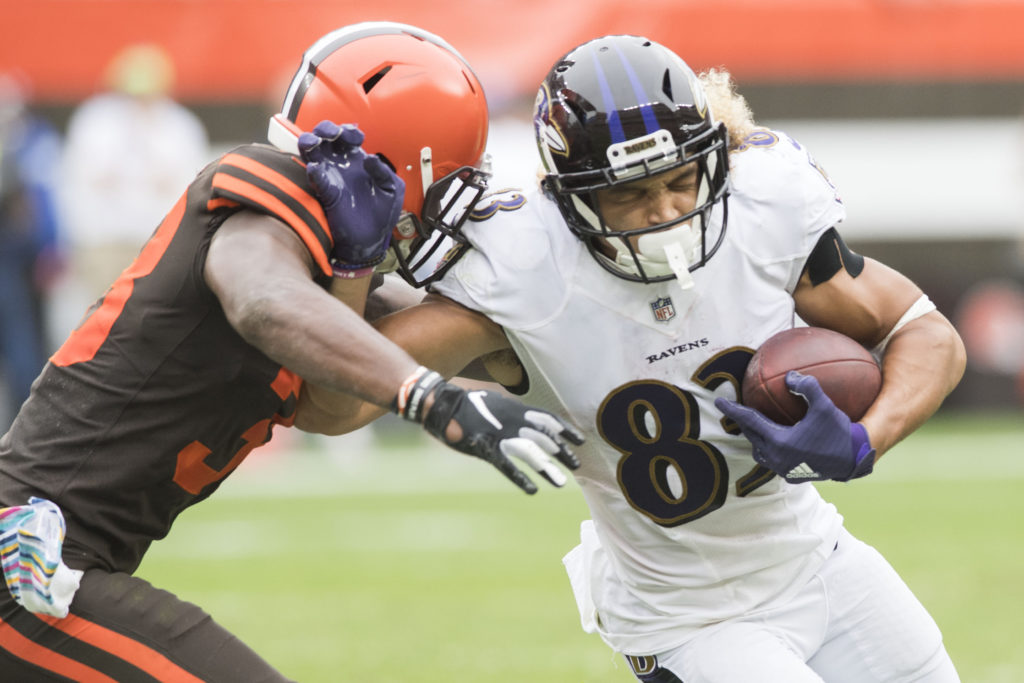 Better late than never…..Buy/Sell/Steal returns for its third season, with a new format. Instead of telling you every week to start Zeke, D-Hop, Kelce and the other litany of ‘no-duh’ names to start (which you already know to do), we are going to focus more on players who are either valued too high or too low for the week. These articles will be based off a 12 team, PPR format (1 QB, 2 RB, 2 WR, TE, Flex, DEF).

— The biggest news of last weekend: Saquon Barkley will miss 4-8 weeks (looking more like eight). Wayne Gallman looks like he will get the nod as the starter.

— Cam Newton is out, Kyle Allen gets the start again

— T.Y. Hilton aggravated his quad last week. Check the injury report, this is worth monitoring

— Julian Edelman sustained a rib injury Sunday, no word on the severity

— Byes start this week with the Jets and 49ers

— The week kicks off Thursday with Eagles at Packers

— The week closes out Monday with Bengals at Steelers

Ravens Fantasy Player of the Week

Willie Snead: Did everyone see what Cooper Kupp did to the Browns last week from the slot? 10/102/3. Greg Roman should take notice.

As seen with KC, defenses are starting to game plan for Hollywood and Andrews. Snead steps up this week.

QB (QB ranked lower then 12th): Jacoby Brissett: Brissett has looked more and more comfortable each week, throwing two or more TDs in every game (7 TD and 1 pick on the year). Oakland is on the road for a 10am West Coast kickoff. With or without Hilton, Brissett will continue to impress.

RB (RB ranked lower then 24th): Wayne Gallman: The Skins have allowed the 4th most rushing yards in the league so far, which bodes well for Gallman as he fills in for Barkley. Additionally, for Daniel Jones to build on his impressive first start, the Giants need to establish a run game early. Gallman will finish as a top 20 back this week.

WR (WR ranked lower then 24th): Marvin Jones: If the Lions want to have a chance to beat the Chiefs, they will need to throw the ball, A LOT! That means plenty of chances for Jones. The Eagles last week took Golladay out of the game last week and Marvin went off. Look for KC to do something similar this week, with Jones out performing his current ranking.

TE (TE ranked lower then 12th): Jason Witten: The Saints just allowed 18 points to Will Dissley last week. Witten, who is having a quiet yet decent year, has averaged 10 points a game. I trust him more the O.J. Howard this week (more on that later).

QB (QB ranked in the top 12): Deshaun Watson: I get it – you are starting Watson, and that is fine, but set expectations low. Carolina has allowed the second fewest passing yards and have three picks on the year.

RB (RB ranked in the top 24): Nick Chubb: Yes, the Ravens were beat up by RBs last week, but the Browns are not the Chiefs. The Ravens are giving up on average just 60 yards a game on the ground. Chubb is a borderline RB2 this week in my eyes.

WR (WR ranked in the top 24): Sammy Watkins: Since his monster Week 1 performance, Watkins has not come close to replicating those numbers, nor has he found the end zone. With Mecole Hardman and Demarcus Robinson taking on a bigger role in the offense, Watkins is not trustworthy.

TE (TE ranked in the top 12): O.J. Howard: The Rams have owned opposing TEs this year, holding them to 7 catches for 75 yards and no TD. To say Howard has been a disappointment this year is an understatement, as he is averaging just 5 points a game.

(Fliers, buy week fill-ins, free agents or guys on your bench who should start this week):

QB: Mason Rudolph: The Bengals are a mess defensively. Rudolph will have his coming out party Monday. The Bengals have allowed 6 TDs and a QB rating of 110. They have no pass rush either, getting to the QB just 5 times. Rudolph should have a clean pocket and would be a nice fill-in for Jimmy G.

RB: Justin Jackson: This is simple: the game should be done by half time, which means Austin Ekeler will get pulled. Tony Pollard went for over 100 last week against Miami, so look for the same storyline this week.

WR: Phillip Dorsett: Ranked as WR 48 this week, Dorsett will well exceed his ranking. Take away the Week 2 game when the Pats had AB, and Dorsett has gone off for 10/148/3.

TE: Jack Doyle: If Hilton is out, there are more targets to go around. Doyle is the beneficiary for that.