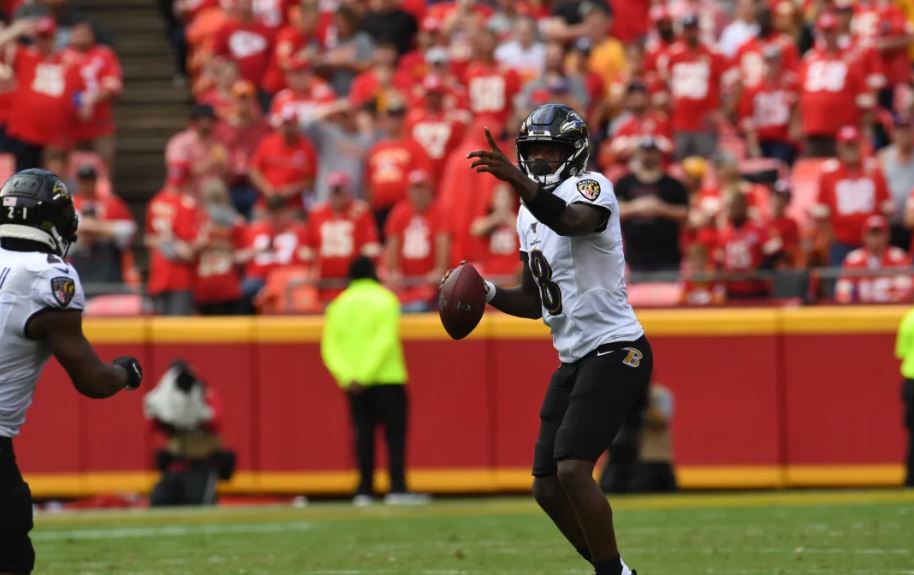 Ravens Flock, welcome back to for part 2 of The Coordinators where we’ll break down the Ravens passing attack on Sunday in a 33-28 loss to the Kansas City Chiefs.

Did you miss part 1? No worries, check the link here where we took a look at the run game.

As a reminder from yesterday’s article, here are the run-pass splits from Greg Roman’s play calling on Sunday:

The Coordinators touched on it in yesterday’s article, but the number of pass plays called was the most surprising takeaway. When we break down the passing numbers by quarter it does tell an interesting story.

The 3rd and 4th quarters saw significantly more success from completion percentage to yards per attempt to quarterback rating.

The question remains, what turned things around for the Ravens? I speculated yesterday that the approach in the second half was geared towards establishing the run and using high percentage passes to get Lamar comfortable.

It worked and I believe that was a huge reason for the better passing statistics in the second half.

Take it as a lesson learned for the Ravens offense. It isn’t about needing the run game to be able to pass. It’s about sticking to your identity. In order for the Ravens to see success it’s going to be using the run game and shorter passes to pull that defense to the line before they get hit over the top with some of the deeper route concepts they are using.

Lamar’s deep ball was off on Sunday, but that looked like an off day and not a regression. I do not anticipate it to be a consistent problem.

It’s a very underwhelming stat line, but on the road in a big game where the Ravens went away from their identity, I’m left feeling a lot less concerned than some of our friends on Twitter.

These games are going to happen and it’s all about what Lamar does to respond. I have no doubt in my mind that there will be a strong response on Sunday when the Browns come to town.

Charting serves as a great opportunity to check on your assumptions when you’re watching the game live. We’ve all experienced it on game day. The beer causes our vision to get a little blurry, the nachos cause some indigestion and the emotions…man can those ever cloud your judgement.

I was left feeling like that Ravens made a mistake by not using routes to attack the short part of the field. So let’s check on that assumption with the numbers: 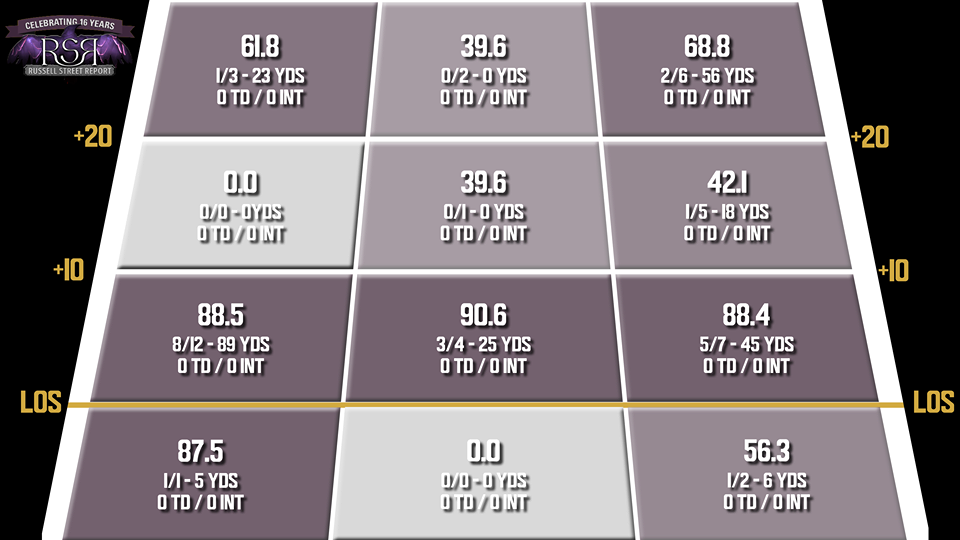 Not only did we have a large portion of attempts on the short parts of the field, but they were outrageously consistent across the left, middle and right zones.

So it begs the question, why did I have that assumption? I think the big reason was the lack of success the Ravens had on the longer throw. They didn’t have too many attempts on the 10-20 yard range where they were 1/6. However, they did make 11 attempts in the 20+ range.

It’s a very interesting approach because it does provide a little bit of an idea of what the plan was in Greg Roman’s mind.

Given the success of the short passing game in the 0-10 yard range, which resulted in a 70% completion percentage, it stands to reason that they were trying to execute the gameplan I mentioned earlier after all.

They were using that short range to set up some of the long passes. For example here’s the sequence of the first drive of the game:

This combination of short passes (at least in terms of air yards) and runs set up two deep 20+ passes.

This is very much the nature of the west coast offense that Greg Roman is using. So despite having that assumption that the Ravens went away from their focus it is quite clear that they didn’t in the 1st quarter on the series that led to a Mark Ingram touchdown run.

However, they did go away from this in the 2nd quarter and that really is where the Ravens fell behind. To refer to yesterday’s graphic, here’s the breakdown of play calling by quarter: 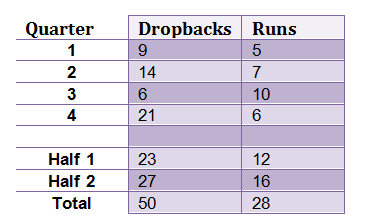 In the second quarter, Jackson was 5/12 for only 44 yards. So what did his air yard attempts look like? Well in 12 2nd quarter throws the ball only went 10+ air yards on three attempts. On seven of those 12 attempts the air yards were under five.

Keep in mind that’s factoring in that they only ran the ball seven times in that quarter.

So the Ravens were attempting to use those short passes, but they just weren’t there and that led to the defense not adjusting and therefore not opening those deep throws.

It’s an interesting trend and something we’ll be keeping an eye on moving forward as we see different game scripts and different outcomes.

Through the first two weeks of the season Lamar’s favorite pass catchers were Marquise Brown and Mark Andrews. Neither were very effective on Sunday as they combined for five catches on 16 targets for 64 yards and a 60 QB Rating.

Many speculated prior to that game that it would be the perfect opportunity to get Miles Boykin and Hayden Hurst going now that defense might take notice of Brown and Andrews.

Those assumptions were correct. Hurst, in particular, had five targets on the day including three that were for 15+ air yard attempts (29, 19 and 16 air yards). Unfortunately, all three of those were incomplete.

Boykin’s one target was a 21-yard bomb to the end zone that went off his fingertips. Drops are subjective, but I would classify it as a drop, albeit a difficult catch. That would be two drops in three games on five targets.

The running back numbers stood out and were probably underutilized given how much space they had in the flats. Ingram and Edwards combined for six catches on six targets for 47 yards. Of those 47 yards, 52 of them were YAC yards.

How did they have more YAC than total yards? Keep in mind that some of these completions, especially to RBs, are behind the line of scrimmage on swing passes. Edwards, for example, caught a pass with -5 air yards (5 yards behind the LOS), but resulted in a 5-yard gain, which means he had 10 YAC.

Similar to the run charting, 11 personnel was heavily favored in the passing game.

Last week I talked about the success that the Ravens had passing out of 12 personnel. In particular, I focused on the way the Ravens could use their athletic TEs in 12 personnel to give a spread look to the defense.

12 was successful once again, but not used nearly as much as 11 was. This was likely a bit of a reaction to trailing in the second half and wanting to move the ball and spread the defense.

In fact, they used 12 personnel almost exclusively in the second half (note – this is both run and pass snaps):

There’s a lot to like about the Ravens spreading the defense out. When you use 21 and 22 personnel it can lead to some heavy stacking of the box by the opposing defense, which the team saw against the Cardinals.

However, 11 and 12 personnel when you have athletic TEs means you can do a lot of interesting things that keep the defense guessing.

Sticking to the Ravens identity, the team will likely use more 21 and 22 personnel when the game script isn’t in the context of making a comeback, but it’ll be an interesting trend to watch as the season rolls on.

The Browns have a very strong defensive line and I expect them to approach the 1st quarter by stacking the box and sending pressure to get to Lamar.

The running game will need to be used, but this may create the perfect opportunity to use some short quick passes (drags, slants, screens, etc.) as an extension of the run game if they’re playing zone behind some of these blitzes.

The Ravens took this approach against the Cardinals and it created some easy pitch and catches with Marquise Brown.

If they can do that and have some easy completions, it will set up what has worked for the Ravens so far, and that is opening up some deep routes where the Ravens pass catchers can get some 1-on-1’s against Cleveland DBs.