Through three games in 2019, the Ravens have run the ball 62 times on first down plays. For reference, that’s the second highest number in the NFL. The team is also averaging a league high five yards per carry on first down runs. Greg Roman’s offense is simply at its best when it’s using a solid power running game to set up the pass.

Down early against the Chiefs though, the Ravens lost their way. Lamar Jackson was forced to try to take over the game with his arm and his accuracy took a significant hit. As his accuracy as a passer fell and the Ravens moved further away from the run, the offense looked worse than it had at any other point in 2019.

Against the Browns, the Ravens need to get back to consistently using the run to set up the pass. After a flurry of offseason moves, the Browns possess one of the better defensive lines in the NFL. Moving the ball on the ground against them won’t be as easy as it has been against other opponents this season, but an effective running game will do wonders to slow down the effective duo of Myles Garrett and Olivier Vernon coming off the edge to rush the passer.

With the most rush TDs and fifth most rushing yards, Mark Ingram has been one of the best RBs in the NFL thus far in 2019. To go along with Ingram, Gus Edwards, Justice Hill and Lamar Jackson have all proven themselves to be valuable pieces to the Ravens multi-faceted rushing attack. In the Ravens’ first AFC North battle of the season on Sunday, Roman would do well to lean on those four to get the win.

Against two bad teams in the Ravens’ first two games, Jackson did exactly what he was supposed to do as a passer. He had a week with a perfect passer rating, won an award and padded his stats. His completion percentage was through the roof and his efforts went a long way to quiet those who’ve questioned his abilities as a QB.

Against the Chiefs in Week 3, things were different for Jackson. Down by multiple scores for most of the game, Jackson looked like a QB trying to force the ball and make special plays to lead his team to a comeback victory. Lamar finished the day 22/43 for 267 yards and no TDs. While he did extend his season long streak of turnover-free football, his 51% completion percentage and handful of bad overthrows left much to be desired as a passer.

At home against Cleveland in Week 4, Roman should call a game that gets Jackson comfortable and on schedule throwing the football. Simple reads and high percentage throws to his favorite weapons should help to restore Jackson’s confidence after a rough week. I’d like to see a heavy dose of ten-yard throws to Mark Andrews and slants to Hollywood Brown to get Jackson and his pass catchers on the same page again.

The Browns entire starting secondary missed Week 3 against the Rams and it is currently unknown how many of them will to be ready to play against the Ravens. A simplified passing game that gets Lamar back on track should be enough to get the job done against Cleveland.

Breaking News: Lamar Jackson likes Mark Andrews and Hollywood Brown. A whopping 47.8% of Jackson’s completions so far in 2019 have come to one of those two former Oklahoma Sooners. Yes, Jackson has seen good success throwing to his favorite two targets, but he’ll need to get more of his teammates involved if he hopes to have sustained success as a passer this season.

Willie Snead led the Ravens in catches in 2018. Working almost exclusively out of the slot again this year, Snead has only managed six receptions. Snead has reliable hands, runs great routes from the slot and seems to be the logical choice as the next Raven to get more targets.

Against the Browns in Week 3, Los Angeles Rams slot receiver Cooper Kupp had a field day with the Browns secondary. Kupp finished the night with 11 receptions for 102 yards and a pair of touchdowns. Jackson should take advantage of a hobbled Cleveland secondary that has so recently proven susceptible to slot WRs and get Willie Snead involved on Sunday. 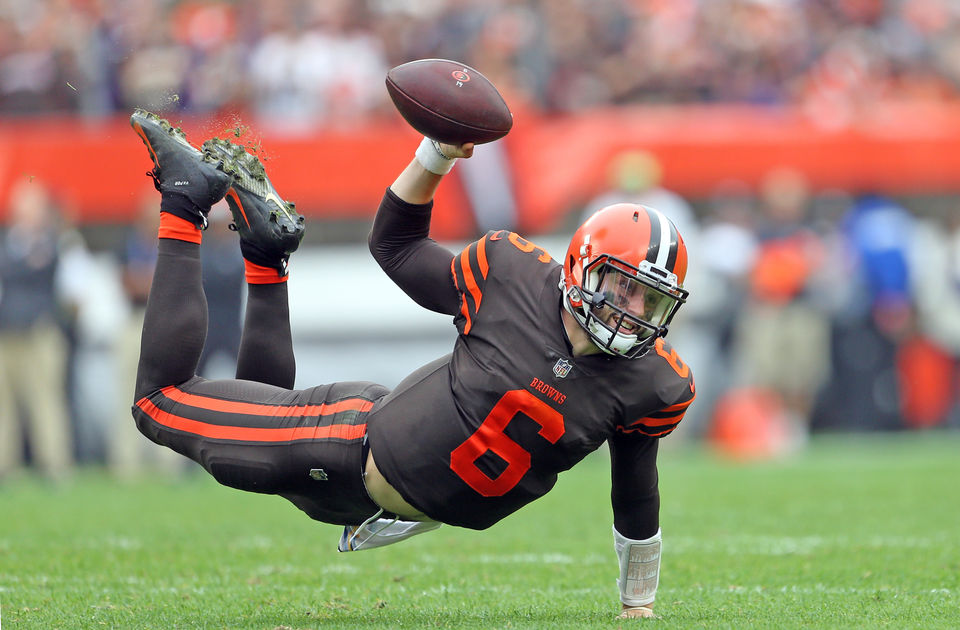 Through three games in 2019, the Ravens are leading the league in hits on the QB. Yes, much of that is due to the volume of blitzes that Defensive Coordinator Wink Martindale throws at opposing QBs, but that’s sort of the point. As is typical of Ravens defenses, this year’s group has done a good job at keeping QBs uncomfortable.

While Baker Mayfield is often thought of as a creator and gunslinger who makes plays on the move, the numbers have simply not supported that talking point so far in 2019. The Oklahoma product is completing 56.9% of his passes and has thrown the second most interceptions (5) in the league. While Mayfield hasn’t been nearly as good as advertised, his problems have been particularly evident when he’s forced to leave the pocket. Against the Rams in Week 3, Mayfield looked like two different players at times. Inside the tackle box, Mayfield was 17/26 for 176 yards and 1 TD (97.6 passer rating). Outside the tackle box though, he was 1/10 for 19 yards and 1 INT (0.0 passer rating).

The Ravens, under the direction of Martindale, would do well do get Mayfield moving on Sunday. Behind a bad offensive line, Baker has been feeling the pressure and is likely to be thinking about leaving the pocket a little early. If they can get Mayfield off his spot, the Ravens can induce another bad day and may even help Baker take the league lead in interceptions.

If you’re like me, you’ve heard the words “communication,” “Ravens,” and “secondary” used together in at least one sentence per hour since the clock struck zeros against Kansas City last Sunday. In their Week 1 blowout of the lowly Miami Dolphins, any communication issues in the secondary were masked by the fact that they were just that much better than their opponent. Against the Cardinals in Week 2, the communications started to rear their ugly heads as Kyler Murray and Kliff Kingsbury spread them out. The talk about communication issues reached a new level in Week 3 when one clear miscommunication lead to a long TD from Patrick Mahomes to Mecole Hardman.

Injuries to starting CBs Jimmy Smith and Tavon Young have undoubtedly caused communication issues in the Ravens secondary issues. Breaking in a new Free Safety after well-regarded “coach on the field” Eric Weddle’s departure doesn’t help either. As Earl Thomas, Anthony Averett and the rest of the secondary continue to work on their communication in this defense, Martindale should keep things simple.

At a rate of 6.4%, Mayfield has thrown into double coverage more than any other quarterback in the NFL through three weeks. Mayfield also has thrown five interceptions and is near the bottom of the league in interception percentage. The Ravens would be wise to keep their coverages simple and not give Mayfield any big plays courtesy of a communication blunder on Sunday.

Through their first three games in 2019, the Browns have leaned more on second year RB Nick Chubb than most would have expected. Even with a subpar offensive line clearing the way, the Georgia product is third in the NFL in rush attempts per game and currently sits seventh in the league in rush yards per game with 77.7. Chubb is a well-rounded runner who has enough speed to get outside and enough power to do damage between the tackles.

Against the Cardinals air raid offense, the Ravens were forced the flood the field with defensive backs. Understandably worried about Mahomes’ cannon and the Chiefs speedy receivers, the Ravens spent a considerable amount of time in a dime defense. With Mayfield off to a sputtering start, the Ravens should consider having an extra player or two in the box more than they have in any other game this year. The Ravens should commit to limiting Chubb early and giving Roman’s offense time to build a lead. If they can force the Browns to play from behind and throw the football, they’ll subsequently limit the impact that Chubb has on the game down the stretch.

Against the Chiefs in Week 3, the Ravens defense strayed from their norm and had Marlon Humphrey occasionally “follow” Kansas City’s number 1 WR (Sammy Watkins). Up against the Browns and Odell Beckham Jr. this week, I expect that the Ravens might deploy Humphrey in a similar way. Humphrey and Beckham are two of the better players at their respective positions in the NFL so I expect some fireworks in their first game as AFC North rivals. This is the matchup to watch on Sunday, but it may also be a matchup that the AFC North and the entire league has their eye on for years to come.