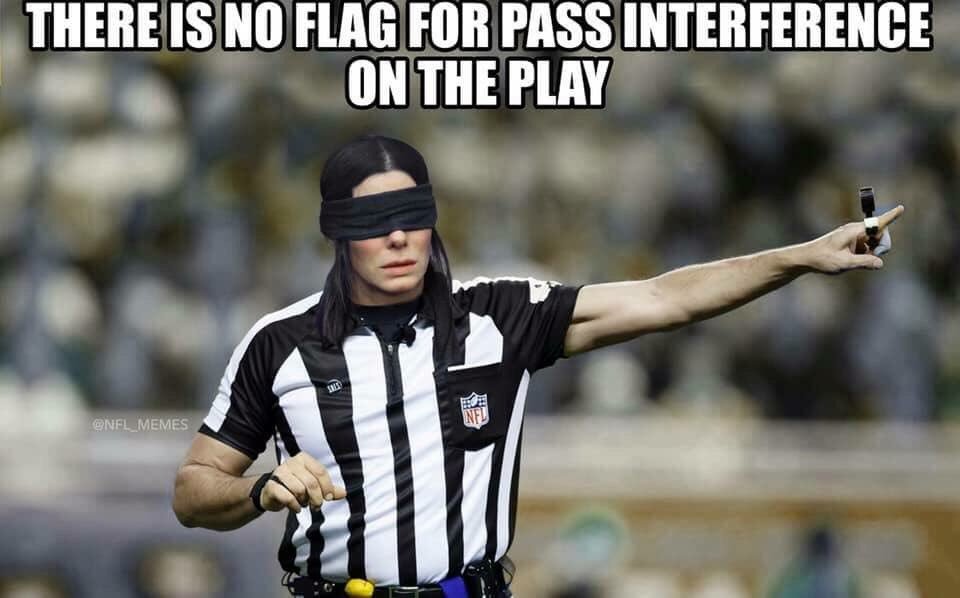 Inconsistency plagues NFL officiating. One crew’s DPI treasure is another crew’s DPI trash. The league has boxed itself in with rules that defy logic and fly in the face of common sense using interpretive words like egregious and intent to justify the call or lack thereof, on the field.

How about placing a competent NFL official in the booth of each game and that official is empowered with the ability to overturn ANY call on the field given the technology afforded him? Not holding? Overturn the call. Clearly a DPI, make the friggin’ call! Don’t cop out by diving through the loophole of egregiousness.

Take for instance this game altering call that wasn’t made against the Philadelphia Eagles. Anyone watching this entertaining Thursday night contest hosted by the Green Bay Packers would agree that this is textbook defensive pass interference. There was no flag thrown on the play but the Packers wisely challenged it. The no-call was upheld.

“There was no clear and obvious evidence that Philadelphia #29 significantly hindered the opponent.” ~ Alberto Riveron, Sr. VP of Officiating

I’ll let you determine whether or not Al needs an eye exam or a crash course on DPI.

“In #PHIvsGB, Green Bay challenged for pass interference. After review, there was no clear and obvious evidence that Philadelphia #29 significantly hindered the opponent.” – AL pic.twitter.com/Loc0LJp90q

I mean, this can’t be anything other than DPI pic.twitter.com/ssTViKFOOt

Burfict was ejected and then later suspended for the balance of the season – a decision to which Jon Gruden has vehemently objected. Gruden’s QB Derek Carr is arguably even more upset.

Derek Carr on Burfict: 1) I think he’s one of the most misunderstood people in the NFL . . . When he showed up, he quickly turned in to one of my favorite teammates I ever had. He’s one of the most genuine, awesome people I’ve ever been around . . . #Raiders

Two things are disturbingly clear as it relates to this hit from Burfict. First, the league’s biggest cheap shot artist’s reputation weighs in heavily on the league’s decision to suspend Burfict. This isn’t the first time that this clown has threatened the career of another NFL player. He’s earned the suspension. He probably deserves a lifetime ban.

Secondly, it’s painfully obvious that Derek Carr needs to get out more.

In this next clip, Patriots cornerback Jonathan Jones takes a vicious shot at Bills’ QB Josh Allen. Jones was flagged for the hit and Allen was knocked out of the game. Jones doesn’t (yet) have the reputation that Burfict has but the flag only cost the Patriots 15 yards. It cost the Bills their quarterback who as of this writing remains in concussion protocol and is listed as questionable for Week 5.

Making matters worse, Jones acted as if his mission was accomplished – taking out an important opponent. Not only did the hit wreak of malicious intent, Jones confirms it by taunting the knocked out Allen who looked like a doormat on the turf at New Era Field.

Closer to home, Shawn Hochuli’s crew bumbled of few calls (as they regularly do) during the Ravens v. Browns contest this past Sunday.

In this first play, Odell Beckham, Jr. is rewarded with an illegal contact penalty against Marlon Humphrey. Although called against Earl Thomas on the field (yep, 29 looks a lot like 44) it’s pretty clear that one of the league’s whiniest children initiates the contact with Humphrey. It was a huge call in that it kept the Browns’ drive alive after the third-and-13 attempt from their own 42 failed. Cleveland would go on to score a touchdown, the game’s first points.

This next play ended a string of 247 passes without an interception by Lamar Jackson. Devaroe Lawrence makes a terrific play on the ball to make the clean interception. Let’s keep in mind that he has every right to the ball that the intended receiver Mark Andrews has. BUT…

Linebacker Joe Schobert also in coverage, impedes Andrews’ effort on the play. I suppose the foul wasn’t egregious enough to challenge this important play that could have put the Ravens right back in the game, trailing by 15 at the 5:27 mark of the fourth quarter.