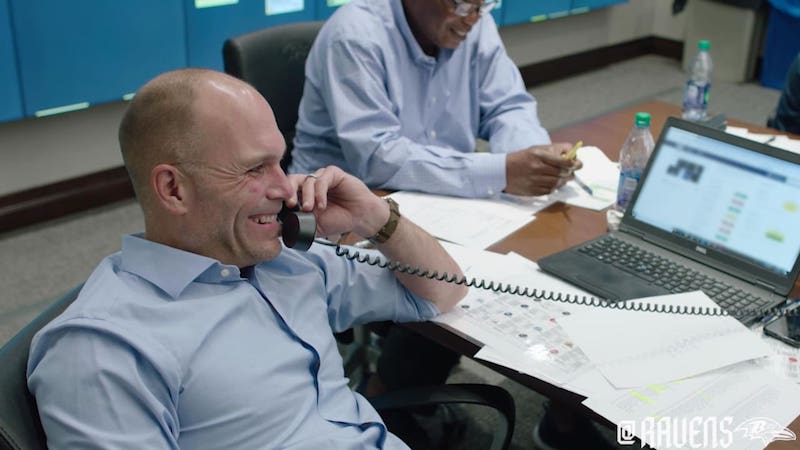 Hi, and welcome to a hot take!

I’d bet you’re already fuming and ready to reply in the comment section with something about pass rusher being a bigger need? Maybe a corner is your fancy? Possibly an inside linebacker who can drop into coverage and not give up a litany of yards to backs and tight ends? Or a strong safety with Tony Jefferson down?

All of those things are fine, but hear me out first before you go giving my take (T.J. Watt) the stiff arm (Lamar Jackson).

First and foremost, I need you to focus on the fact that I never said wide receiver is the team’s biggest need – I simply said it should be the ‘focus of the trade targets.’ I fully realize the need for a pass rusher is the most glaring of any position, but does one pass rusher fix the entire defense?

It won’t revive three of the best six DBs who are currently on the shelf. It won’t help the Ravens’ collective inside linebacker group figure out how to play in coverage, either. You may get a few more pressures a game – perhaps an extra sack or two-  but is it enough to fix the defense that’s allowed 500+ total yards in two of the last three weeks, and struggled to stop a 3rd-string quarterback last week? Hell, even last week the Ravens sent five and six guys on numerous snaps and couldn’t get home, while the DBs continually gave up easy throws to Mason Rudolph & Devlin Hodges…

One guy simply isn’t fixing the defense for Baltimore.

Offensively, you could argue for a Center or Left Guard, but I honestly don’t think the play of Bradley Bozeman and Matt Skura has been as awful as some fans seem to think. I’d also argue that sliding Bozeman to Center and putting rookie Ben Powers at Left Guard may be an even better option, so no – I don’t think we need to make those trades.

Alas, I go back to wide receiver, as I believe adding one good starting wideout will be enough to turn this already potent Ravens offense into a much deadlier weapon and potentially a damn fine shootout team that can crush defenses any way they want, which is a necessary evil given the numerous issues on defense in 2019.

Let’s focus on the current group right now, as the Ravens have two major weapons in the receiving game – Hollywood Brown and Mark Andrews.

Andrews is a top-5 tight end, and Brown is a budding rookie… but is that enough?

At Tight End, Nick Boyle and Hayden Hurst have played well enough in their roles that they could be a viable TE1 on a dozen NFL teams right now, but at wide receiver? The Ravens are barren beyond Brown.

When Hollywood goes down, as we saw this week versus Pittsburgh, there is absolutely no depth of value that can be called upon. In fact, if you go back throughout the course of the season, you’ll see that even with Brown on the field, the Ravens get minimal contributions outside of their first-round rookie pass catcher, effectively allowing defenses to focus their efforts on two targets when Jackson drops back. This offensive passing attack right now has the feel of a Joe Flacco-led offense that had Steve Smith Sr and a bunch of nobody else (Kamar Aiken? Perriman? Moore? Friggin’ Campanaro?)

Call me crazy, but I’m pretty sure Brown is nowhere close to being Michael Thomas at this stage in his career…

Yes, I get that the Ravens offense is solid, and yes I do understand that the run game and tight ends help make up for the lack of other wideouts. But let’s not pretend we haven’t noticed a regression in recent weeks. Lamar has been forcing the ball into tight spaces that have turned into tips/picks, teams are loading the box to stop the run to force the pass, and pockets are closing quicker on the sophomore signal caller.

The best way to cure that?

If you get Lamar a proven vet who can run solid routes and separate, the dynamic of the offense suddenly changes. Now teams have to fear the run game, Lamar’s legs, Hollywood’s speed, the tight end triplets and a proven vet receiver. Even the trickle-down effect of adding a good receiver could give rookie Miles Boykin better matchups and improve his stat lines (for the record, this whole ‘need a wideout’ thing isn’t me knocking Boykin either; he’s just not ready yet).

Will this fix the Ravens defense? Absolutely not. They’ll still be below average. It’s possible that they may get a little better upon the return of Jimmy Smith in a few more weeks, or perhaps Jaylen Ferguson figures things out and gets home on a few more pressures, and maybe Josh Bynes is good enough to hold things down inside.

But ultimately, the Ravens can drastically improve their offense with a single trade (a trade that likely doesn’t cost you nearly as much as a talented pass rusher would) as opposed to just patching one hole on the defense and still having a below-average unit.

After all, the best defense (in the modern era NFL) is a good offense.