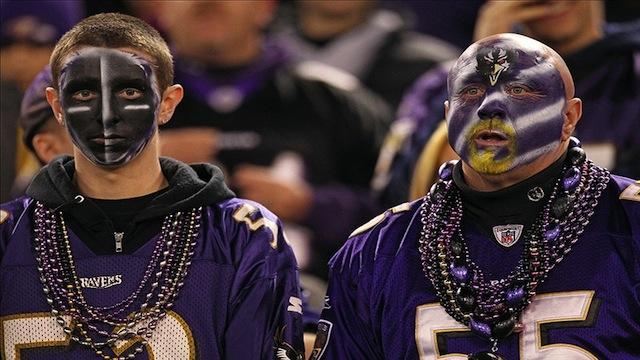 Or is it less ‘happy’ because you’re on the side of ‘doom & gloom’ today, despite the win? Perhaps you’re so far down in the dumps that you’re already counting the future losses in the coming weeks, while lamenting this team in all facets of the game?

If this is you, apparently, you’re not alone.

It seems that there’s a litany of other Ravens fans feeling rather sour following the Ravens’ (4-2) 23-17 win over the Bengals (0-fer) yesterday, and honestly?

I’m not here for it, folks.

I get that you don’t feel great about the Ravens not blowing out a lesser opponent, but is that really rational?

Here’s a fun fact for ya: even the Super Bowl-winning 2012 Ravens eeked out a 23-16 win over a 5-11 Browns team in Week 4, and just like this Bengals game, the Ravens watched their 23-10 4th quarter lead dwindle, before eventually being able to take a few knees and call it a ballgame.

These close games happen, especially against divisional opponents, and it’s certainly not isolated to the Ravens franchise.

Just look around the NFL this week where the thriving Cowboys led by Zeke Elliott, Dak Prescott and Amari Cooper, were held to just NINE points until the final drive of the game, and came up short to a previously 0-4 Jets team. The Steelers took a 3rd string QB that’s a better duck caller than signal caller into LA and took care of the Chargers (mind you, the same Steelers team that Ravens fans also said we should’ve blown out, despite their having one of the best O-Lines in the NFL and a very solid defense). The 49ers continue to be the surprise team of 2019 as they held an explosive Rams offense to a mere seven points (on their opening drive of the game) in a result nobody saw coming…

Simply put, parity in the NFL is a real thing, and “any given Sunday” isn’t just a meaningless expression.

Lest we forget, 32 teams are loaded with 53 players who are all fighting to win their assignments on each and every play in order to see another down, another game, and another pay check. Nobody is actively quitting and you cannot simply expect good teams to blow out bad teams at will, or else be considered mediocre at best.

You simply take the win, look for the positives, and move on.

So what were the positives for the Ravens yesterday?

For starters, Lamar Jackson had good ball security (funny how nobody talks about that after bashing him relentlessly in 2018s), and barring a rare Mark Andrew self-inflicted fumble (slow it down to see he kicked it out himself on the hurdle), the Ravens did well with the ball on offense. Hell, in the running game, the Ravens had three players with more rushing yards than the entire Bengals team (33) and Justice Hill (31) was right on their heels too!

Yes, a few deep drives ended in FG attempts, but imagine believing every team scores seven on every drive against the Bengals in every game…

Defensively, yes it took a while to get on Andy Dalton thanks to some quick throws to alleviate a lackluster line, but the Ravens found themselves in a close game late and getting serious pressure on Dalton in the clutch moments. Jaylon Ferguson (though he didn’t get credit, unfortunately) finally got home, as did Tyus Bowser and Matt Judon. We also got to witness the Chuck Clark show, as Clark filled in seamlessly for Tony Jefferson, and should have everyone feeling much better about his role moving forward.

This game was a bad kickoff TD return and a handful of boneheaded penalties from being a skull drag. The self-inflicted wounds can be cleaned up, and what better game to deal with those issues, right?

In the big picture, Baltimore currently leads the NFL in Time of Possession and Total Yards Per Game (offensive, duh). They’re second in scoring, 13th in passing offense, and the defense has played much better the past two weeks.

Here’s another fun angle to heighten your happy as we look ahead to our next opponent: the Bengals lost to Seattle in Seattle by one point, and the Steelers lost to Russell Wilson & Co. by a whopping two points in a game where Fat Ben went out with an elbow injury and Mason Rudolph was thrust into the starting role. That same Seahawks team has won four one-possession games, with their only ‘blowout’ a 27-10 win over the Cardinals…  thanks to a JaDaveon Clowney defensive score and three Seahawks fumbles taking a friendly bounce.

Mind you, this is also same big, bad Seattle team that many Ravens fans have already chalked up to a loss…

As for the Patriots game that fans are also conceding an L on, dig deeper into your fandom and realize 1) the Ravens will be home, 2) coming off a bye, and 3) should be getting secondary reinforcements from Jimmy Smith at a much needed time. Then you also consider the fact that the Patriots have faced four awful teams (Skins, Fins, Jets, Giants), one below-average team (Steelers) and one team with a winning record (Bills) who also happen to have a middle-of-the-road offense. Still, the Bills held the Pats to 16 points in a 16-10 New England victory, in a game where Tom Brady went 18/35 150yds 0 TD, 1 INT.

Am I saying the Seahawks and Pats are bad?

But am I suggesting they are far from bulletproof and the Ravens are more than capable of beating these powerhouse teams because the Ravens, despite a few close games against lesser opponents, are on the cusp of being a up there with these big dogs, and if they clean up some sloppy play, we’re going to once again shock the world?

You freakin’ betcha I am!

Squash that negativity, and wear those purple-tinted glasses with pride today as we look ahead to the Seahawks next Sunday!