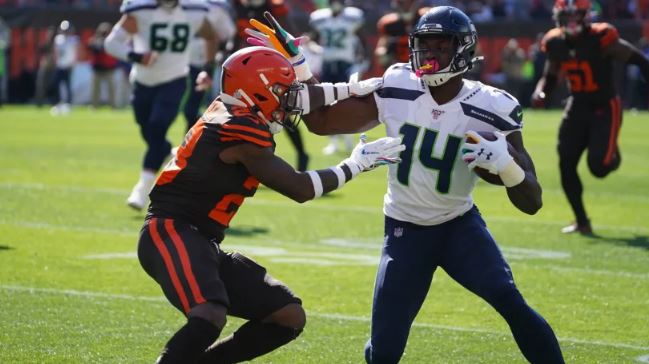 Last week, I wrote an article outlining what I’d want to see in a Ravens trade, specifically saying it should be a young player who is extendable and wouldn’t require too much draft capital in return. Though I had no idea Marcus Peters was a possible name, he epitomizes that kind of target, and I love the move from Eric DeCosta to bring him in.

While this won’t be the focus of the article, I will offer my thoughts on the deal: Peters is a talented player who should thrive in the Ravens defense, which utilizes big, press corners well. If Peters plays well, which he should, I would love to see Baltimore bring him back as a younger upgrade over Jimmy Smith, but if he doesn’t DeCosta will be rewarded with a 3rd or 4th-round compensatory pick. This was a high-reward deal with extremely low risk.

Now, as for Peters’ fit with Baltimore this week and into the future, I think he’s perfect. The Ravens had interest in him in the 2015 draft and for good reason – he’s a solid player who can line up in man-to-man opposite Marlon Humphrey and create turnovers. We know how strong Humphrey has been as a shutdown corner this year, and Peters should help to enhance his impact on each game. Together, they could be one of the more formidable cornerback tandems in the NFL. When Smith comes back, the three players will be able to rotate in and out, giving the Ravens a stable of corners who all have the ability to take receivers out of the game completely.

Now, especially with Earl Thomas holding down the back end, each should have the luxury of taking chances at breaking on routes, and with Smith, Peters, and Thomas in the game, Humphrey will be able to blitz more often than he currently does (he’s surprisingly good at that, too).

Looking ahead at this coming Sunday, Peters will be limited, but should play. What will be interesting will be what kind of schemes Wink Martindale dials up with Peters on the field. For me, it makes sense for Peters – when he is in the game – to assume the role that Humphrey has taken. Obviously, Humphrey has been an elite corner and is playing at a level that Peters won’t match, but actually, I don’t think Peters should shadow Tyler Lockett (the Seahawks’ top target).

Instead, the Ravens should employ a tactic that was used by Bill Belichick and the Patriots when they had Darrelle Revis.

While Revis was a Pat, the defense had him take the opposition’s #2 receiver out of the game, leaving another corner and safety to cover their top wideout. I think against the Seahawks, this makes a ton of sense. For me, as a big-bodied, man-to-man boundary corner, Peters matches up very well against rookie DK Metcalf. Especially given Metcalf’s relative inexperience in the NFL, Peters should have an advantage, despite his own inexperience with the Ravens defensive playbook. If Peters takes Metcalf out of the game, Humphrey can partially focus on Lockett for most of the game but also on effecting the game elsewhere, allowing both Thomas and Chuck Clark to cover the deep throws and protect the other corners, like Brandon Carr.

Having Peters shadow Metcalf should help take him out of the game. While it may simplify the Ravens’ scheme against Wilson a bit, I think it’ll give Peters his best chance at creating a turnover or being generally impactful in his first start in purple. And, because it’ll require less knowledge of the defense, I think it’ll allow him to see more snaps, which is important in this game.

There’s no question that Peters immediately becomes one of Baltimore’s most dangerous defensive playmakers, but in this game, Wink should cut Humphrey, Thomas and Clark loose all over the field. In fact, doing that would be a marked departure from what he’s done all year, which could prove difficult for Wilson.

All in all, for the Ravens to win this game they’ll need to eliminate one of Wilson’s targets. While I have no doubt that Humphrey would do a job on Lockett, who may be Seattle’s best, I think relying heavily on him to cover one player would force the defense to place too much faith in lesser players, as well as on Peters during his first start.

By flipping that plan and using Peters as a true shutdown corner against Metcalf, Baltimore can count on one of the Seahawks’ bigger targets – who is eerily similar to Auden Tate of the Bengals – being a non-factor.

If Peters has that kind of impact in game 1 with Baltimore, we can be excited for his long-term role, in addition to expecting a W in Seattle.