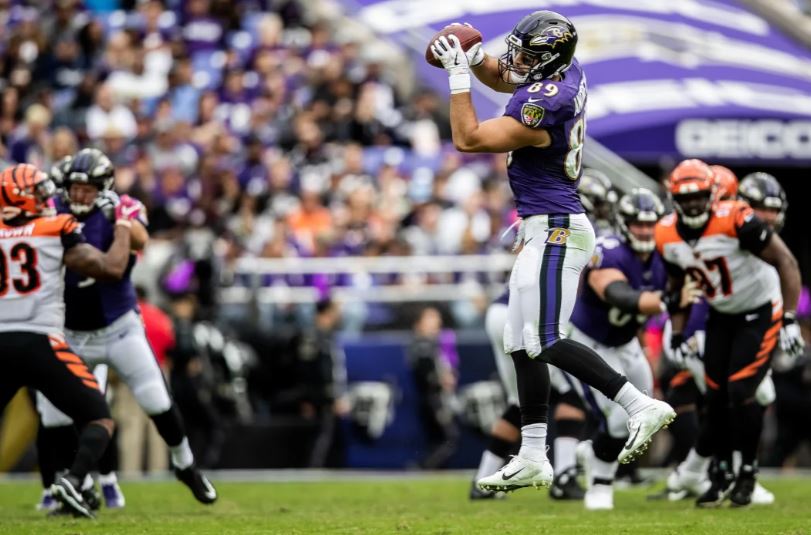 Welcome back to The Coordinators, where we’ll dive into the Ravens passing attack.

[See our article on this week’s running game here]

Last week we spent time breaking down some of the issues that were plaguing the passing attack. We’ll do a check in on progress, but also identify a few more issues that will need to be addressed moving forward.

As a reminder, here are the issues that were identified last week with the passing attack:

…okay that didn’t happen, but there was progress in a few areas, let’s break it down.

Lamar spread the ball around (in several ways)

One of the most notable takeaways was that Lamar completed passes to 9 different pass catchers on Sunday. Of those 9 pass catchers, all 4 WRs who took offensive snaps (Jaleel Scott didn’t take a snap at WR, only STs) had at least 2 receptions.

The target share was perfectly balanced between the WR and TE. Given that Marquise ‘Hollywood’ Brown was out of this contest, and that Mark Andrews received his normal eight targets, it’s not all that surprising.

That said, it should be considered progress that the ball was spread between pass catchers, especially with multiple catches going to each WR.

Miles Boykin, in particular, made a couple of really strong plays. It’s been a tough start for the rookie who has suffered some drops and some communication errors with Jackson, but this is a very positive game to build on. Yes, it was only two catches for 28 yards, but let’s take a look at each.

Boykin attacks William Jackson’s outside arm and sells the go route to the point where Jackson turns his hips outside. As he turns, Boykin plants and completes the slant route. He has about three yards on Jackson when the ball comes in. This separation allows Boykin to find some space and pick up about nine additional YAC.

This is a route that can be seen on Boykin’s Notre Dame film with a simple, but effective, crossing route. Lamar hits him in stride and it’s an easy pitch and catch in zone coverage. Willie Snead running deep clears out that side of the field to give space for Boykin to run into and forces the safety to come up.

Lamar took the easy looks that were given to him

Last week we took a look at Lamar’s progressions and we presented that he wasn’t always taking the easy look, and instead opting to push the ball further down the field. He corrected that on Sunday, with a number of easy looks for Lamar within the 0-9 yard line.

Taking a deeper look at the passing zones, Lamar was 16-19 for 161 yards on completions in the 0-9 range. There wasn’t a discrepancy between the sides of the field. Of the 19 passes in the 0-9 range, six were to the left, eight to the middle and five to the right, which is good distribution and adds to Lamar reading the field well and going through his progressions.

Some of the film on these easy looks:

This was one of my favorite plays. Watch as the LB has to pick whether he wants to cover Hurst or continue to cover Andrews. That’s textbook zone flooding to make the defender pick their poison. Excellent read by Lamar once the LB stopped and chose Hurst.

Designed play action to hit the easy hitch route. Easy pitch and catch once again between Lamar and Andrews.

This is another play that was designed really well. The Ravens used Snead and Andrews to run rubs while Ingram just runs underneath for an easy catch.

This play in particular stood out compared to last week. You have to think Lamar may have waited for the possibility that someone may have broken open down field. Instead he decisively hits Roberts in stride who takes it for some YAC. That decisive throwing is what Ravens fans want to see.

This is another one that I feel Lamar may have tried to push down field last week. Instead, it’s an easy look and Snead picks up some YAC.

According to NextGen Stats, Lamar only threw three passes with a defender within one yard. That speaks to Lamar’s ability to read the field, but also the play design, which we get into next.

The Ravens went back to the Basics

In addition to the easy looks that Lamar took, the play design led to easy routes being part of the initial read. Let’s take a look at the targeted routes. First though, I want to give a big shout out to fellow Coordinator, Slade (@BigPlayReceiver) who leads our pass charting. 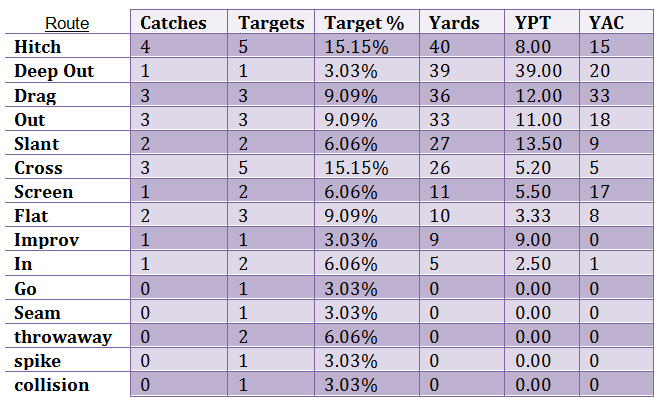 The targeted routes support the simpler game plan that the Ravens went to last week. It was high percentage short routes consisting of primarily hitches, drags, crossers, slants and flats (which make up 54.54% of the target share).

Given the success on the ground, it makes sense to keep it simple.

I would argue that Roman wanted to use Sunday as a confidence builder for Jackson after a tough week through the air and before a tough contest @ Seattle.

Well, it looks like it worked. The statistics weren’t anything flashy, but based on the tape, Lamar was much more decisive and looked more comfortable in the pocket.

But were there still issues?

There were still issues with the passing approach. Most notably, there wasn’t a single completion that had air yards of 20+. To be fair it was close, when Andrews had a 39-yard completion on a deep out, but it was registered in the 10-19 yard zone.

This has been an issue for multiple weeks. In fact, the last time Lamar completed a pass with 20+ air yards was from Q4, 8:13 of the Kansas City game.

Since the KC game, Lamar has gone 0/7 on passes with 20+ air yards. The attempts have been there, but the completions haven’t.

This was the bread and butter in the first two weeks. The Ravens were running the ball and short passes that set up the deep ball. As mentioned last week, defenses have adjusted.

I would argue the Ravens adjusted back to that though this week, finally (again, because I assume Roman read last week’s article). If teams want to sell out to take away the deep ball and it opens up these easy looks, then the Ravens need to continue to take them. They were easy pitch and catches and they opened up YAC opportunities.

For example, the Ravens took advantage with the number of crossing routes and drag routes. On drag routes, for example, Jackson went 3/3 for 36 yards with 33 YAC.

If they continue to execute them then defenses will have to adjust and that’s when you hit them over the top.

This all just goes to show what a chess match this sport can be. Luckily, this game serves as an example of how Roman and Jackson are starting to take control of their chess pieces.

As I mentioned, I’m looking for Lamar to carry this performance into Seattle. I’m hoping this serves as a good learning lesson of taking what the defense gives you in the passing game and executing your offensive design.

The deep ball will return if they continue to move through the air the way they did on Sunday. Yes, the Bengals aren’t that good of a team, but it’s the design that matters, and the fact that the scheme was being used to open routes and create high percentage looks.

Defenses like Seattle’s won’t let that last all game, and as soon as they step up on some of the shorter routes, you hit someone on a go route, just like earlier in the season.

The offensive line will be critical to pass block for Jackson and keep Jadeveon Clowney out of Lamar’s face. The defensive backs of Seattle don’t really intimidate and I think the Ravens can get some favorable match ups, especially if Hollywood Brown returns.