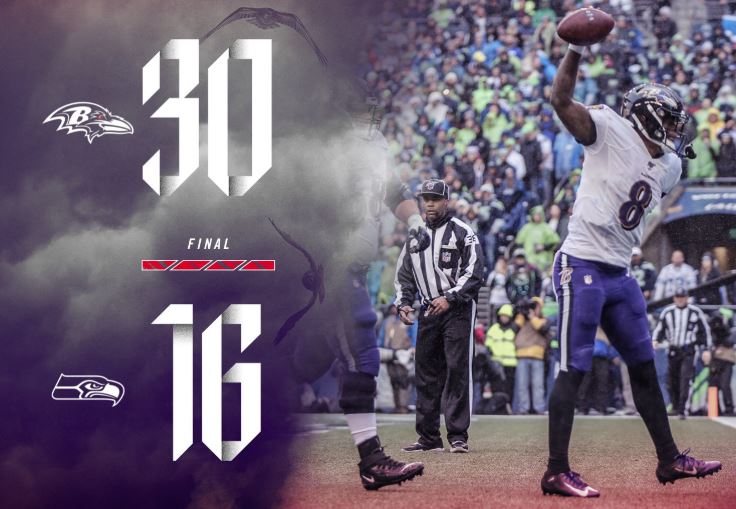 The Ravens outscored the Seattle Seahawks 17-3 in the second half in Week 7 to secure a 30-16 victory. RSR staff react to the win here.

— This could be a season-defining win for the Ravens, who now go into the bye 5-2 with a 2.5-game lead in the AFC North.

— Lamar Jackson is clearly the leader of the team and he has an intangible that simply cannot be taught: a will to win. He finished with 117 yards rushing with a touchdown. He completed 9 of 20 pass attempts for 143 yards. His receivers, most notably tight end Mark Andrews, didn’t help him with several drops.

— Earl Thomas enjoyed his homecoming to Seattle, where he spent nine seasons and made the Pro Bowl six times, Thomas was more vocal on the sidelines and helped keep the secondary organized. He has to feel good about this one.

— Cornerback Marlon Humphrey showed why he is one of the top playmakers in the league. After allowing a touchdown in the first quarter, Humphrey buckled down the rest of the way and put the game away with a fumble recovery for a touchdown.

Wow, what a statement win. Lamar Jackson & the Ravens passing game were out of sorts today, as the QB missed on the some throws and was let down by his pass-catchers on some others (seriously, Mark Andrews, wtf?), but man…Jackson willed his team to victory, picking up key yardage with his legs at every opportunity.

Marcus Peters loudly announced his arrival in Baltimore, and Marlon Humphrey had his second huge late fumble recovery of the season, taking this one into the end zone (and showing great awareness to re-establish himself inbounds before picking it up). It felt like Russell Wilson was able to move the ball at will at times, but in the end, Wink Martindale’s unit should hold their heads very high after holding that offense to 16 points in their own house.

The Ravens head off for a well-deserved rest at 5-2 and feeling damn fine.

Huge road victory going into the bye. Lamar Jackson was outstanding, putting this offense on his back. He was explosive, poised, and decisive. His play combined with a commitment to running the ball in the 2nd half made all the difference.

On defense, Wink Martindale called a gem. Marcus Peters showed exactly what his playmaking prowess can add to a shaky pass rush and L.J. Fort was outstanding.

Belichick and company await after the bye but 5-2 with a chance to rest up and potentially get back Marquise Brown, Jimmy Smith and Peanut Onwuasor back sounds good to me!

A tale of two halves to say the least.

The offense wasn’t on the field for very long, but they were efficient when they were. Outside of some uncharacteristic drops from Mark Andrews, the offense played decently well. They weren’t able to stop Jadeveon Clowney in the run game (which isn’t surprising given he is the best run stopping DE in the league), but they held up well and kept the Seahawks on their heels most of the day.

The defense is still concerning. Absolutely concerning. The edge defenders are not getting the job done, and it is making life hard on the secondary. I know the Ravens are building for the future, but it would be worth trading for a pass rusher if they feel that they can make some noise in the playoffs.

Good team win, and they have to feel good going into the bye week.

On to the best team in football.

Huge road win that was the first big test of the season. The upcoming schedule is very tough so this was a very important win to stay ahead in the division.

The defense has come together in the last few weeks and Marcus Peters proved his worth in week 1.  With the defense putting up 14 points it proved too much for Russell Wilson to overcome.  Humphrey and Peters are going to be a scary duo this year.

– Lamar Jackson went into Seattle and absolutely took the game over. Think about the game he’d have had without the Andrews drops. Incredible performance that put an MVP stamp on his name.

– I was worried about the Ravens abandoning the run, but unlike past games, they didn’t. Thank god for that.

– While the story has to be Lamar Jackson, if there’s a second one it’s 100% this defense. Against Wilson they got enough pressure, played the run well and defended the pass. Not to mention had two massive turnovers. In Humphrey and Peters we’ve got two downright scary playmakers, I’m giddy with excitement about that.

– At 5-2 we’re in good shape, but there’s still work to be done. I want to see 4 of the next 6 being wins, one way or another. If that happens, the Ravens could be staring down a first-round BYE.

This is what you call a season-defining victory for the Baltimore Ravens. Facing a quarterback that’s been dang near perfect, facing a 5-1 team the Ravens offense and defense stood tall. Marcus Peters made his presence felt, as i thought he might, with a pick-six and Marlon Humphrey showed his awareness taking a fumble for another touchdown. Admittedly I questioned this defense, but now I’m wondering if they’re just coming into their own.

I can assure you, worst case scenario for Browns and Steelers fans was the Ravens finding a way to head into their bye 5-2. It got worse for them seeing the Ravens completely handle the Seahawks on their way to victory heading into the bye. The Ravens are a serious contender this year. I’m willing to say that now.