The Sophomores: A Look at The QBs From the 2018 NFL Draft Class

With 7 weeks in the books for the 2019 NFL season, we have had a wide range of performances from the 2018 QB draft class. While it could be easy to dismiss some of these sophomores as busts, keep in mind there is a growth period and I do think that these guys will all improve in some capacity in the next few years. However, this is not a ranking on the future, this is a ranking on the right here, right now. Let’s get into it.

I have very little to say about this guy that isn’t pity. That was how I felt in week 1, and that’s how I feel now. Rosen looks frantic, uncomfortable, and just flat-out out of place whenever he’s under center.
There’s been an occasional flash that shows why he was a top-ten pick, but those flashes have been few and far between. I don’t see Rosen moving up on this list of sophomores at all with Fitzmagic taking back the starting job. Even our friends at ufabet would probably wager against it.

I’m kicking myself for missing out on making all of the mono jokes I could make at golden-boy’s expense here, but as Darnold has recovered, any joke I put here just wouldn’t be funny.

Moving on to actual analysis, it’s difficult to get a read on Darnold due to his lack of games so far this season, but he’s looked bad in one game and pretty good in the other. Then Monday Night Football happened. Were it not for his game against the Cowboys I would be tempted to put Rosen ahead of Darnold.

Credit where it’s due, Darnold abused a clearly unprepared Dallas defense and would earn the Jets’ first win of the season. As a person who frequently watches the Dallas Cowboys I can confidently say that the Cowboys were clearly unprepared and went into New York expecting an easy win. Darnold would end up struggling against a team with a real head coach in the Patriots, himself turning the ball over three times in the first half.

Watching Darnold, his talent is obvious and is starting to come out, but the lack of competence in New York is preventing him from being his best. If Darnold had performed well against New England, I would have moved him up to the third spot on this list.

I was writing this article as Monday Night Football was happening and I was holding off on this on the slim chance Darnold does something in garbage time. He didn’t. Getting shut out at home is absolutely unacceptable especially after that huge win against Dallas last week.

Rosen had a similar stat-line against The Patriots but he doesn’t have a Le’Veon Bell to use. Darnold does.

I would be more than happy to put mono-boy at number five after that ghastly performance (he’ll regret the “seeing ghosts” comment), but as he’s had ONE good game as opposed to Rosen’s zero, he gets a stay of execution. For now.

Sam Darnold explains what he was thinking during the “I’m seeing ghosts” comment. #Jets pic.twitter.com/wXLalgiZhr

Watching Baker Mayfield as a Ravens/Sooners fan is a very confusing experience. I want him to do my school proud, but only against teams that aren’t the Ravens (obviously). It would not be an exaggeration to call Baker Mayfield’s season so far, a complete disappointment.

Why you ask? (Probably not because this is a Ravens blog and we all love laughing at Cleveland but just go with it) Baker has thrown an interception in every game he has started this season and has thrown more than twice as many picks as touchdowns. With Jarvis Landry and Odell Beckham in your receiving corps and Nick Chubb keeping defenses honest, there’s really no excuse for that.

We’ve almost reached the halfway point for the NFL season and the Browns have yet to win a game at home. Baker has done a better job protecting his home field in commercials than in actual games. He leads the sophomores in picks and of the three sophomores remaining in this ranking, he has the lowest completion percentage. Keep this in mind when we get to numbers 2 and one.

Imagine if Lamar had done what Baker did in a primetime game. We would never hear the end of it. Baker is just not playing up to his self-fueled hype following his rookie season. Darnold and Rosen have excuses for their poor play thus far, Baker has been given a gold mine of talent and he is still massively underachieving.

The schedule doesn’t get easier for Cleveland as next week they have to play the Patriots in New England and then go off to Denver to face a familiar foe in Joe Flacco. The harrowing test of the Patriots in Foxborough would be enough of a challenge, but dismissing the Broncos at Mile High would be foolish.

After that comes a very stiff Bills squad that could very well still be in the divisional race at that point in the season. That’s two teams with good defenses and the Broncos at home. Von Miller will enjoy taking on the Browns’ shoddy O-Line at Baker’s expense.

The Browns could very realistically end up at 2-7 leaving them in an inescapable pit to begin the second half of the season. Unless Baker Improves dramatically, the Browns are doomed. 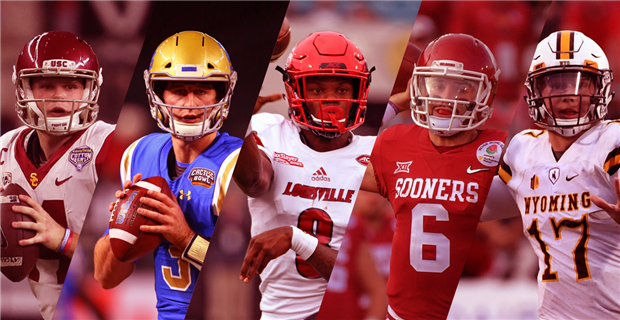 Josh Allen needs to show me more. Playing behind the Dolphins for 3 quarters isn’t going to cut it for me, but he’s shown more at this point in the season than the three sophomores behind him. Allen has shown much improvement compared to last season and I “billieve” that he is the second best situation in terms of his front office.

At 6’5″, Allen reminds me of young Big Ben (the player not the person). Cannon arm plus pocket mobility equals defensive coordinators and opposing fans screaming at their TVs. Aside from a terrible game against New England (which concluded with a concussion for Allen) he has been serviceable to pretty good. He deserves a lot of the credit for the Bills’ 5-1 record, and if he can keep improving, the Bills could make noise in the AFC Playoffs as a wild card. After all, we Ravens fans have seen what a young, tall, small-school QB can do in the playoffs with a good defense.

I have simple reasoning for Lamar remaining in this spot: He is receiving MVP consideration; his counterparts are not. Simple math is simple.

Name a stat and Lamar leads the sophomores in it. Passing Yards: 1st, Touchdowns: 1st, Yards per attempt: 1st, wins: tied for 1st, Rushing yards 1st. It seems the only stat Lamar doesn’t lead the sophomores in would be interceptions, in which after Darnold’s awful “performance” last night, he, Rosen and Darnold are tied for the least with five interceptions apiece, but let’s not forget that Lamar has played in all 7 games. Rosen and Darnold have played in 5 and 3 games respectively.

Watching Lamar’s growth as a football player has been nothing short of beautiful. His spirals are tighter, he’s making better decisions with the football, he’s taking better care of the football and he oozes passion for the game.

No man on this list has grown half as much as Lamar Jackson has. Allen has improved a lot, yes, but not nearly as dramatically as Lamar has. The Chargers playoff game put Lamar’s flaws on pristine display for the entire league to see. Lamar has learned to utilize his dual-threat capabilities. Without LJ’s legs, the Ravens lose in Seattle.

That’s my rankings as midseason approaches. As you can see, not much has changed rankings wise, but trends are developing for these QBs. Some of them have playoff runs to look forward to, and some need to get back to work.

Until next time, Flockers.