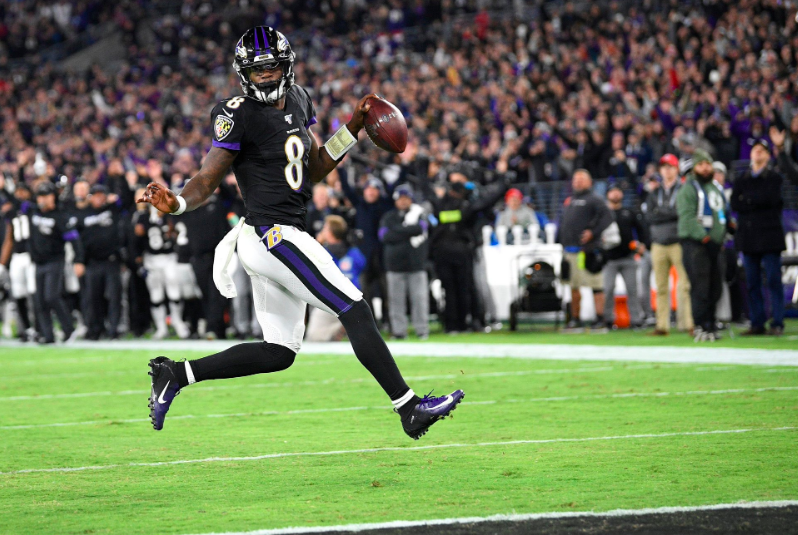 The Ravens gave the New England Patriots a rude welcome to Baltimore on Sunday Night Football, sending them home with their first loss. RSR staff react to the win here…

Imagine what this game could have been were it not for the Ravens’ two early turnovers. Ah well, it’s more fun now that Pats fans had hope for a bit, right?

Like I said in our Bold Predictions, I trust John Harbaugh with extra time to prepare. Because of that, I wasn’t all that surprised that they jumped out to that 17-0 lead. What did surprise and impress me was the way the offense responded once New England had pulled to within 24-20 and had the Ravens defense on their heels.

The Ravens announced themselves as true contenders on a national stage, and Lamar Jackson showed NFL fans everywhere why he’s a legit MVP candidate.

This Patriots defense is threatening to challenge the 2000 Ravens’ record for points allowed in a 16-game season. The Ravens hanging 37 on them certainly helped out their predecessors’ prospects of hanging onto that record. New England’s schedule doesn’t get much easier, so hopefully some more teams can hang 25+.

Anyway. That was awesome. On to Cincinnati!

The Patriots were the hardest test the Ravens had, and they absolutely slobber-knocked them. Don’t let this score fool you, this was a bigger tail-kicking than the score tells you.The Ravens ran the ball down the throat of the Patriots’ “vaunted” defense, and got basically what they wanted without even having to take a shot down the field.

Lamar Jackson is flat out special but what’s more telling us this defense seems to be hitting their stride. If the 2018 Ravens defense begins to show with this type of offense, the Ravens are flat out dangerous the rest of the way.

The Ravens approached this game exactly like they needed to. The Patriots have a tremendous pass defense and we knew they’d use Stephon Gilmore to shadow the Ravens’ only threatening wide receiver.

The Patriots have a good run defense, but the Ravens’ varied rushing attack and dual threat QB offer a totally different challenge. When the Ravens play downhill and dictate terms, they can beat anybody in football.

Defensively, they did a great job blending their abundance of secondary talent. Brandon Carr mixing in at safety offers some intriguing options for Wink with Chuck Clark playing a multitude of roles. They now have one of the better sub package pass defenses in all of football with players who will compete as run defenders. That’s invaluable.

Even with some self-inflicted wounds the Ravens dictated terms to the defending Super Bowl champs in a convincing win. The league has no choice but to take notice now.

WOW!! I predicted a four-point win but I’ll take the 17-point win instead. The Ravens just embarrassed the so called “boogeymen” Patriots defense, putting up 37 points.

The defense also played extremely well and the offensive turnovers are what helped the Patriots put points on the board. The Ravens just put the league on notice.

The Ravens needed to play a near-perfect game to win, and that is exactly what they did.

Early in the game, Baltimore rushed to the lead not because they caught New England off guard, they were just playing perfectly. Even with the turnovers and it getting within range for new England at 17-13, the Patriots looked outmatched schematically and physically.

Lamar Jackson got to showcase to the rest of the league what he can do on primetime, and the Patriots looked vulnerable for the first time in quite some time.

I am not sure if the Ravens are contenders yet, but they definitely gave Ravens fans a reason to be excited moving forward.