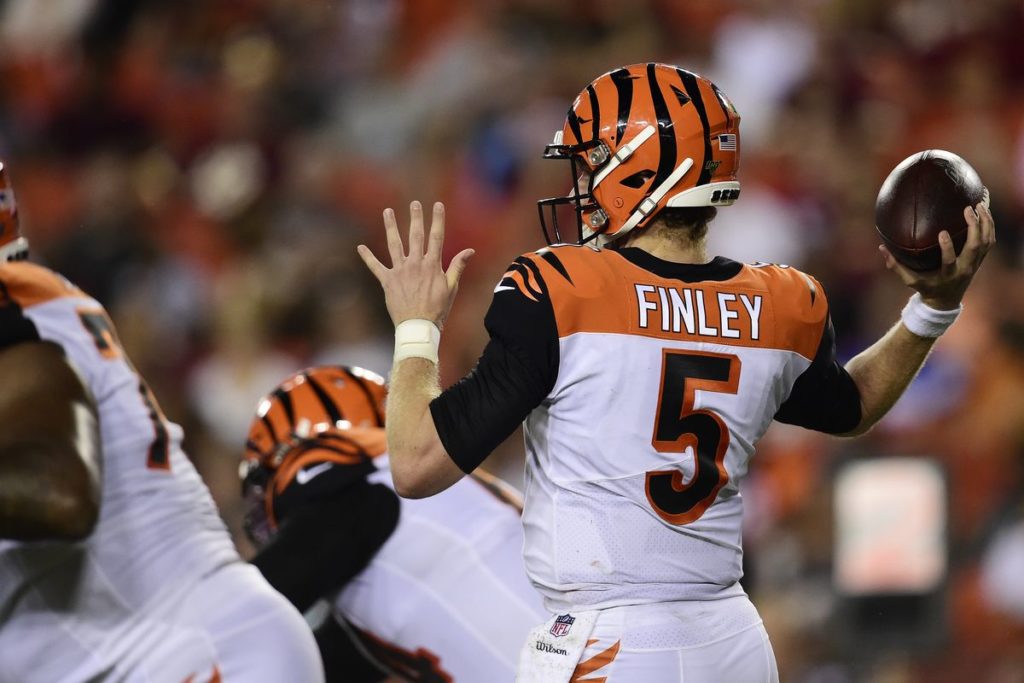 The phrase “let-down game” gets thrown around a lot by football pundits. Coming off a massive 37-20 win over previously unbeaten New England, the Baltimore Ravens’ Week 10 game against the winless Cincinnati Bengals is the epitome of a let-down game.

The theory is that teams are physically and emotionally drained after particularly tough games, and when the next opponent is perceived as a team that will be easily defeated, preparation and execution suffer.

There is little question that, at their best, the 2019 Ravens are considerably better than the 2019 Bengals. But will John Harbaugh’s team be as physically and mentally prepared this Sunday as they were in Week 9?

As per the odds at SportsBettingDime.com, Baltimore enters Week 10 as a ten-point favorite over the Bengals, who will be giving rookie QB Ryan Finley his first career start in place of a benched Andy Dalton.

Purely based on 2019 performance to date, it’s justified that the Ravens are laying double digits on the road. Cincinnati is the only winless team remaining in the NFL. Their defense ranks dead-last in yards allowed by a sizable margin (435.8 YPG), and is particularly bad against the run (177.6 YPG), which as we all know is where the Ravens shine.

Four of Cincinnati’s eight losses this season have been by at least 10 points.

While the 23-17 final score of the Week 6 Bengals/Ravens game suggests that Cincinnati kept it close, that final score is incredibly misleading. Baltimore outgained Cincy by 247 yards (497 vs 250). The Ravens put together drives of 60 and 83 yards in the second half, only to see both end in field goals.

Even so, they led by 13 points with less than two minutes to go before the Bengals scored a garbage-time touchdown to make the score respectable. And that was with veteran QB Andy Dalton under center.

Finley Is In Tough

As mentioned, Ryan Finley will be making his first career start this Sunday, and while the potential return of AJ Green would be a huge boost for the rookie’s prospects, Finley will not have the benefit of a running game to lean on.

The Bengals are, once again, dead-last in the league in that category, managing a miniscule 59.5 YPG. Making matters worse for Cincy, Baltimore’s defense ranks second against the run (83.0 YPG).

Looking at the big picture, it’s hard to envision how Finley metriculates the ball down the field with any sort of consistency. Could he hit Green or speedster John Ross for a big gain or two?

Will Cincinnati have sustained success on either side of the ball?

Not if past performance is a sign of things to come.

On Thursday, there were reports that Lamar Jackson was absent from practice. Brief panic ensued. But it just as quickly dissipated when further reports indicated that it was due to illness, not injury, and that the MVP contender would be fine for Sunday.

Elsewhere on the injury list, Earl Thomas is officially “questionable” but likely to play. Marshall Yanda also missed Thursday with some sort of illness and is not in question for Sunday. Fellow OL Ronnie Stanley missed practice with a knee injury and is a legitimate question mark.

On the whole, there is nothing injury-related that should give Ravens’ backers pause about Sunday’s game.

As long as Harbaugh has his team prepared, as he almost always does, the 6-2 Ravens should maintain their two-game lead over the Steelers in the AFC North, and potentially increase it to three if Pittsburgh drops its Week 10 date with the LA Rams as three-point home underdogs.