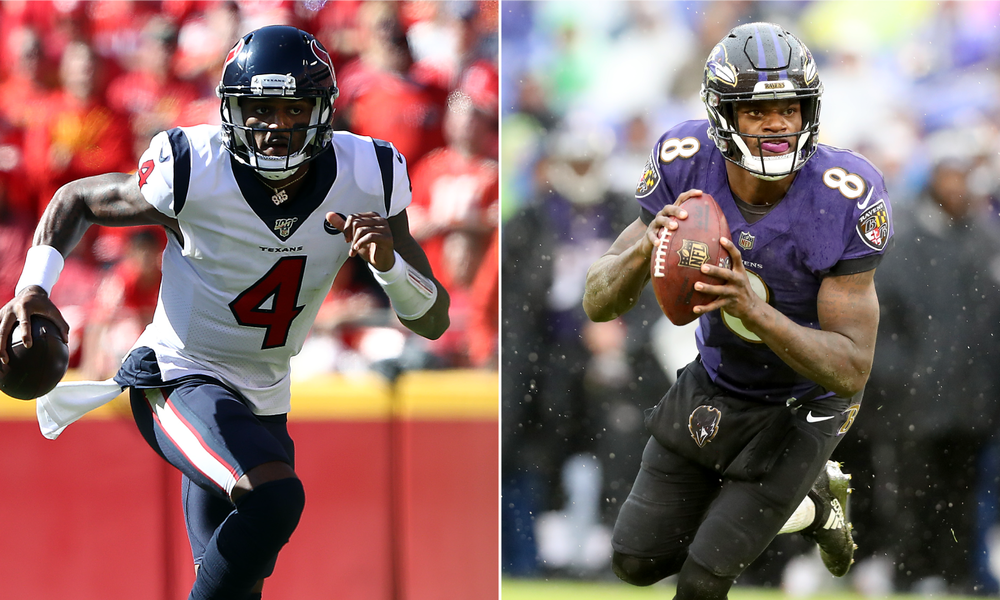 Today is going to be fun.

Two future faces of the NFL going head-to-head for the first time in their professional careers; two dual-threat quarterbacks will never be a dull matchup. Let’s get to business.

If a player from the AFC wins the MVP this season it will be either Lamar Jackson or DeShaun Watson. There are contenders from the NFC as well, but since the Ravens are playing the Texans in Week 11, I’m going to compare each QB’s case for the MVP.

Deshaun Watson is already the best QB the Houston Texans have had in their brief franchise history. The man has shown very little evidence of the ACL injury he suffered in November two years ago, and he is the main reason the Texans are currently in the No. 3 seed in the playoff hunt. With Clowney traded and Watt on IR and on the decline, it’s obvious that Watson is the face of the Houston Texans.

On paper, the strengths of the Texans and Ravens are very similar. The defenses have allowed similar amounts of yardage, statistically the O-Lines rank 17th and 18th for Baltimore and Houston respectively in pass-blocking, and both teams are top 5 in total rushing yards.

Even though the defenses have allowed similar amounts of yardage, I think we can safely say that the Ravens yards allowed were inflated by the Kansas City and Cleveland games. The Ravens D has allowed less than 350 yards in every game since week 4 while the Texans D has allowed 350 yards or more in 4 or their last 5 games. I’d say it’s clear who has the better defense, which could be damning for Lamar’s case should the Ravens and Texans finish with similar records.

Even with Lamar’s beastly rushing stats giving him more total yards than Watson (2742 to 2711) on paper, it would seem that should the season progress at the same rate statistically for these two, Deshaun Watson would be the MVP.

Lamar Jackson has improved more in one season than any QB I have watched in my life. I don’t want to brag, but I totally called it (maybe link Lamar Running back thing I wrote back in the summer). Every part of Lamar’s game has improved across the board, and he has potential to be the best quarterback in Ravens, maybe even Baltimore history. Yes. I know that’s a bold take, but I want you to take a good look at the 2019-2020 Ravens. Just take a good look.

Now, look at Lamar Jackson and ask yourself: what games do the Ravens lose with a different QB? I’d say they lose the Seattle game and the New England game. That would put the Ravens at 5-4 and only half a game ahead of the Steelers. With Lamar at QB, the Ravens had their first 5 game winning streak since the late Steve McNair was the QB back in 2006.

The fact that the Ravens are fighting for a first-round bye with Lamar having more wins (yes, Adam, QB wins is a stat) is more meaningful than perhaps anything else in this MVP debate. Think of all the plays Lamar has extended by using his feet, and think of all the time of possession the Ravens have with Lamar leading the offense. There are plays that other QB’s in the league simply can’t make that Lamar can. If a pocket passer was starting for the Ravens, they simply would not be in the position they are now. You could make a case that the Ravens’ time of possession (which is the second highest in the league) is a factor in the Ravens’ defense improving as much as it has.

I wouldn’t say that either of these players have been perfect this year. They have both had bad games, but Deshaun has had more. Losing to the Panthers and getting outplayed by Kyle Allen would be the big one. Lamar’s bad game would of course be the Cleveland game. Lamar has not lost a game since then (touch wood) and Deshaun had a game in which he was outplayed by Jacoby Brissett.

Both of the players are valuable, but Lamar is more so. However, don’t fret Texans fans. Even though Lamar would get MVP honors over Deshaun this season, there is no doubt in my mind that Deshaun Watson will win an MVP of his own.