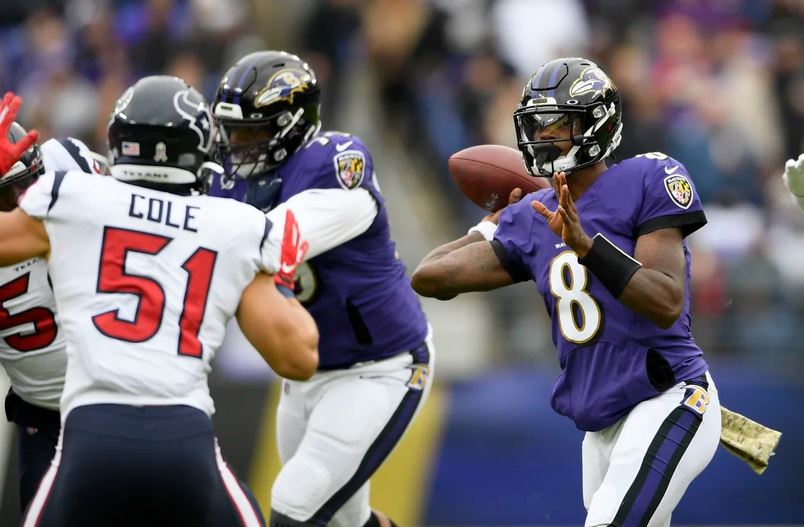 It was billed as the must-see matchup of the week.

Well, it didn’t quite live up to expectations…unless you’re a Ravens fan and then I’d say you probably walked away with a smile on your face.

Yes, the Ravens were completely dominant today in a win that is massive for the AFC’s top playoff spot. The Ravens are now solidified in the #2 seed with a shot at the #1 seed if NE stumbles down the stretch.

The Ravens offense is becoming matchup-proof.

Don’t get me wrong, the Texans are a middle-of-the-pack defense overall, but they do feature a top-5 run defense.

Well, it just didn’t matter because, contrary to what the ‘experts’ say, the Ravens can attack you on the ground and through the air.

During the week, Ravens fans were treated to another piece of expert analysis from Clay Travis of Fox.

“Deshaun Watson is the superior QB. He can actually drop back and use his arm to propel the football down the field in a positive direction unlike Lamar Jackson.”@ClayTravis on why he’s taking the Texans to win outright pic.twitter.com/RMlfGzqfvB

The very fact that someone can have this kind of take after what Lamar Jackson has done is just insane to me, but once again, Lamar shuts his critics down with another dominating performance.

Excuse, my language, but this tweet summarizes my feelings:

Oh shit, now all the Lamar haters are going to have to separate the Houston game when they breakdown his stats to take away credit.

You hate to see it.

I wonder what it’ll be next week to discount Lamar’s success? Another A+ and likely another AFC Player of the Week nod coming for the second year QB. 70% for a 9.3 yards-per-attempt is nothing to scoff at, though some will.

Mark Ingram was bottled up early on the ground, but he did his damage through the air to the tune of three catches and two touchdowns. In clock-eating-time, Gus Edwards came in and decided to gash a tired Texans defense for a 63-yard score.

At this point, you have to be feeling extremely good about the running backs. They’re diverse, they run hard and they have no issue working in an approach that involves change-of-pace carries to other guys. It’s a true team effort from the backs and they fit Greg Roman’s offense like a glove.

During prep week, Lamar Jackson was asked what his favorite highlight of the year was. I think all Raven fans assumed it’d be the spin move, but nope – it was Nick Boyle‘s TD. Lamar continued to say he wanted to get Seth Roberts his first of the year.

Outside of the beautiful grab by Roberts, it was a quiet day from the WR group. The important thing is that they’re making plays when they’re asked to, but the reality is, they just aren’t the focal point of the offense. As long as they make the plays they’re asked to, that’s perfectly okay.

Mark Andrews found pay dirt once again and added a beautiful 51-yard rumble in another impressive performance. However, the guy that stood out early when the Ravens were struggled in the 1st quarter was Hayden Hurst.

Hurst has been a very interesting player to watch. He doesn’t get his number called as much as you’d expect for a former 1st-round pick, but he catches almost everything thrown his way and provides a nice safety blanket for Lamar. His stat lines don’t impress you, but if you watch the game, you see strong catches and a good ability to find soft spots in the middle of the field.

With J.J. Watt out for the year, it was looking like a cakewalk for the Ravens offensive line. The Texans line, outside of Watt, doesn’t feature any elite players, but they do have some strong ones. D.J. Reader made his presence felt early, but the Ravens offensive line rebounded very nicely. This unit has been one of the most impressive developments on the team. Lamar Jackson was kept clean, and there was a push in the run game. What more can you ask?

Well, for a game that was supposed to be an offensive slugfest, the Ravens defense showed it’s not going to let anyone push them around.

The matchup benefits the Ravens, as the Texans feature a vertical passing attack and the Ravens have a top secondary in the NFL. It played out as such, as the Texans couldn’t manage to get anything going until garbage time.

The Texans only had 230 yards offense today and if you factor in Carlos Hyde‘s garbage time run, they would have been held under 200 yards offense. Yeah, not bad!

No one has been harder on the defensive line than me. This is the highest grade they’ve received this year and they did it in a game without Michael Pierce. The run defense was stout without Pierce and the additions of Domata Peko and Justin Ellis paid immediate dividends.

The pass rush was the real shining light today. Deshaun Watson was hit 10 times and the Ravens got home for SEVEN sacks. Matthew Judon has made a case for some big money this offseason in the last two weeks. Judon was great today, with two sacks and some big run stuffs. The former 5th round pick has earned it.

Jaylon Ferguson, aka Sack Daddy, also had a nice breakout game. He had two TFL and found his first sack of the season. He brought consistent pressure and set the edge well. This is a great development for the 3rd-round pick.

Gap control and discipline was the focus for the linebacker group, and they did not disappoint. Josh Bynes and L.J. Fort have been insanely strong at holding their ground in the run game and providing coverage. Bynes added a nice pick on a bad throw from Watson.

Patrick Onwuasor brought the playmaking ability once again with a nice sack and some strong pressures. These three continue to thrive in a rotation.

To start the game, DeAndre Hopkins was eating against the Ravens secondary and many, including myself, got a little nervous. The Ravens defense adjusted nicely and held Nuk to only seven catches for 80 yards. Given how good he is, it great to see the Ravens secondary limit another elite player.

Marcus Peters stood out after the first couple of drives, as he saw a lot of Hopkins and always had tight coverage on him, including a beautiful pass break up where he simply swatted the ball down while matching Nuk’s strides.

What a trade by Eric Decosta!

Justin Tucker suffered his first missed FG of the season, but rebounded well connecting on his two others. That combined with De’Anthony Thomas muffing a punt (he did recover though) drops the grade.

The coaching overall was very strong. The gameplans from Don Martindale and Greg Roman were on point and led to a dominating performance. The only thing to discuss here is the failed fake field goal on 4th & 4. Personally, I have no issue with going for it on 4th down when you have Lamar Jackson on the field. The threat of his legs on short yardage is really hard to adjust to for a defense. However, what is an issue is taking him off the field in the situation by putting out the field goal team.

Just go for it with the offense. They’ve been the most successful team on 4th down in the NFL this year for a reason – and that reason is Lamar Jackson.

Okay, it’s boring to give it to Lamar Jackson every week, so I’m going a bit off here. We know Lamar is great, but one guy that stood out that deserves a game ball is Patrick Ricard. Playing two ways in the NFL is impressive, but excelling at both positions is even better. Ricard is a beast blocking, but today he added three catches for 27 yards which included some very strong running.

I don’t know about you, but I don’t want to tackle a 300-pound man that can run like he does!