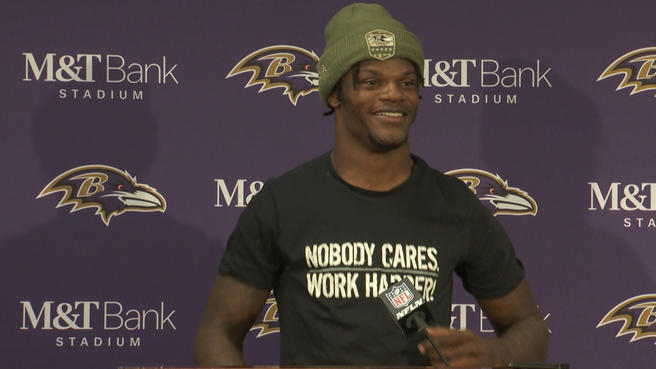 On Monday while scrolling through my timeline on Twitter the Tweet below captured my attention. In a way it reminded me of a story I shared several years ago about the football ties that bind – those that bind a father and a son.

My father passed when. I was 15, I’m now 50. It’s been a VERY LONG time since I could watch the sport we watched together. This past week, I took my son to our first PRO game and I cried for the first few minutes.
Thank you Lamar!
Thank you Baltimore! pic.twitter.com/aZbhxKwFWT

I reached out to Tim Heil to see if he wanted to elaborate on his story which I offered to publish here on RSR. Tim thought that it was a worthy suggestion and accepted the offer. Here is Tim’s story which I thought to be touching and worthy of your time. I hope you agree. ~ Tony Lombardi

It was November 3rd 1985, I was a 15 year old boy who played football, basketball, golf, softball and soccer. My father coached me in football and like all young men, my father meant the world to me.

On this November evening, my father and I were shooting hoops in our backyard discussing Louisville basketball and Green Bay football. (We were only Green Bay fans because I played for the Packers in our local little league football program before playing football for St. Helen Grade School and DeSales High School here in Louisville Ky.)

Like many father and sons, we got into a little argument that evening and I stormed off. Little did I know, this would be the last time I would EVER speak to my father again.

Dad would end up having a massive heart attack and when I came home after throwing a temper tantrum, my father was dead. Needless to say, this was unexpected and for a family whose father/husband was the only source of income (United States Post Office) as Mom stayed at home to care for me and my sister, well, it pretty much destroyed our lives!

My father graduated from law school at the University of Louisville. The two of us would go to EVERY U of L basketball and football game. We never had the chance to see a pro game in person mostly because we didn’t have the finances at the time. My parents sent my sister and me to private schools, on one income. It was challenging.

Watching my mother go back to school and find a full-time job wherever she could, was such an inspiration. As we suffered and somehow got through this challenging time, I did notice something that still resonates with me to this day, and when Lamar wore the shirt that reads, “NOBODY CARES, WORK HARDER”, it inspired me to send along this story.

You see, during the time we were all hunkering down to just get by, all my friends, classmates and teammates had the chance to live life as is. Our lives had changed FOREVER! It seemed to us, NOBODY CARED.

So, we WORKED HARDER!

I never played another sport in high school, I just could not find the strength to do so without my father on the sidelines or in the stands. Without my father’s income, we had to give up our season tickets to all U of L’s sporting events and I never attempted to go back until my daughter was 11 years old (2013). It took me 28 years to overcome my fears – that skeleton in my closet. 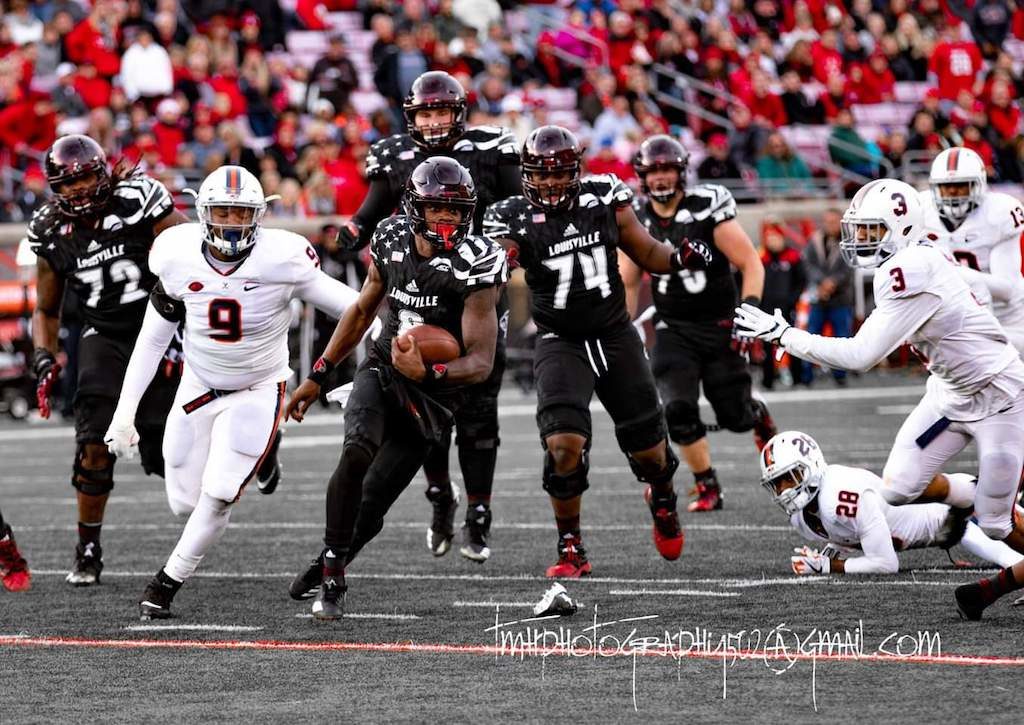 Afterwards, we continued to attend U of L basketball games and then in 2008 my son was born. Then all of us; my wife, daughter and son started to attend Louisville football and basketball games. We fell in love over the years watching Teddy Bridgewater and then topping it off with Lamar Jackson! I knew this kid was special the first time I saw him in person.

And then, in the back of my mind (I never made mention of it to anyone) I felt a desire to go to a pro football game with my son, just as my father and I had discussed in the mid 80’s. Yet I was hesitant to do so. I harbored this strange fear of the emotions stemming from the loss of my father, that I did not want to face again!

I despise the month of November. I was one week removed from the anniversary of my father’s passing, a day that is always difficult.

On the morning of November 10, 2019, I awoke to the idea of asking my son if he wanted to go to the Ravens vs. Bengals game. Now my son watches pro games, but I didn’t due to the painful memories I had up to now, not wanted to face. Going to the game would force me to face something that I had resisted for so long. I know this might seem wrong to you, perhaps even strange, but it’s just what I did to “survive”.

So, I got out of bed and asked my wife if she would want to go to the Ravens game in Cincinnati and she told me she had a patient to go see (my wife is a nurse). I then asked if she would mind if I took our son TJ?

My wife looked at me, seemingly dismayed because she understood my inhibitions. She awkwardly smiled and said “sure, he would like that”.

When I walked into TJ’s room and asked if he would like to go watch Lamar and the Ravens play, he JUMPED out of bed asking, “SERIOUSLY!!!!!” I smiled, said yes, but cautioned that we needed to get tickets NOW because it was then 9:15am, it was a 1 o’clock kickoff and we were a 2 hour commute away. I jumped on line and found 2 tickets on the Ravens sideline at the 20 yard line, 3 rows up.

I WAS SO EXCITED

During the entire walk to the stadium from our car, my stomach was a mess, but the smile on my face and the anticipation of watching Lamar and then seeing the look on my son’s face and to be in this atmosphere, made the knots in my stomach worth it! Once in the stadium, we both were smiling from ear to ear.

I hugged my son and put my arm around him just enjoying the moment.

This is where you just can’t make stuff like this up! The pre-game warm ups were still going on with the clock counting down to 52:18 when this happened.

Over the PA speakers, they were playing the normal hype music and my son and I were just bopping away when Phil Collins’ “In the air tonight” came on. Just typing this out is making me cry and gives me chills!

As TJ watched Lamar warm up, he was oblivious to dad singing.

I can feel it coming in the air tonight, oh Lord
And I’ve been waiting for this moment for all my life, oh Lord

Suddenly, I just broke down in tears. I couldn’t sing anymore, I was just crying. TJ turned and saw me crying. It scared him and he asked, “DAD, WHATS WRONG”? I just smiled and told him that I was just happy to be here with him, my buddy.

Once all of the emotions ran their course, we sat back and watched Lamar and the Ravens do their thing! It was one of the BEST DAYS of my LIFE! That’s why I sent out the Tweet and why you’re reading this now. My son, Lamar and the Ravens helped me overcome some of my deepest, darkest days – to exorcise past events and maybe a few skeletons. I can’t thank enough all who were involved!

The people of Baltimore have a special player in Lamar and he NEVER GIVES UP. His attitude and character remind me of how and what I had to do to overcome the adversity that was thrown my way.

On The Ride Home

I was confused at first and went on to ask him to explain. So, in a typical 11-year-old mindset he responded, “Dad, I mean it was AWESOME to see Lamar again and the rest of the Ravens. Dad, RG3 and Mark Ingram were just AWESOME to see in person. Dad, I wish we could go every week!”

TJ then said, “Dad, it was cool that it was in Cincy, but if we were in Baltimore, then I could have gone into their team store and got some Ravens gear.”

And then he added, “Dad, I would use my money if we could go to the Ravens store. Can we go there sometime?”

So, I guess I owe him a trip up to Baltimore to let him go to the team store but in the meantime, I’m going to have to find him a jersey of something.

A Lesson For TJ

My son plays on a travel soccer team and his season lasts 9 months of the year and then they are training the other 3 months. So, a lot of factors came into play for us to be able to make it to this game – the stars aligned and again, it was one of the best experiences I have had in my life.

But I keep coming back to NOBODY CARES. I just can’t explain how I felt when Lamar wore that shirt! I have tried to instill this mindset in TJ’s head when he plays. His travel team (Javanon FC) is the top soccer club in the Louisville, Kentucky area. The pressures that are put on him are crazy and I try to tell him that NOBODY cares if you score a goal. There are kids out there that want your position on this team.

I haven’t used the exact verbiage WORK HARDER but I have said, NOBODY CARES what you did today, you have to WORK ON THE AREAS THAT YOU NEED WORK ON. But now I can sum it up by saying, WORK HARDER.

Thank you for giving me a platform to share this story. Even after 34 years, it’s hard to tell part of this story, but this helps me in ways I can’t explain.

I forwarded Tim and T.J.’s story to the Ravens and they too were moved by it. They are making arrangements for them to visit training camp next summer. The Ravens also sent along a care package to the Heil Family that was over and beyond. The Ravens regularly engage the community and this is another wonderful example.

We’ve also arranged to get Tim and T.J. a 2-night stay at the Fairfield Inn in White Marsh thanks to Veronica Lombardi and Cara DiPietro, 2 tickets to the Ravens v. Jets on December 12 thanks to TicketIQ.com and a pair of tailgate passes with parking courtesy of Brian Snyder and Chris Caldwell from Bmore Around Town.

This is just another example of how a football team can galvanize a community.

Thanks to everyone involved and for all who took the time to read Tim’s story.