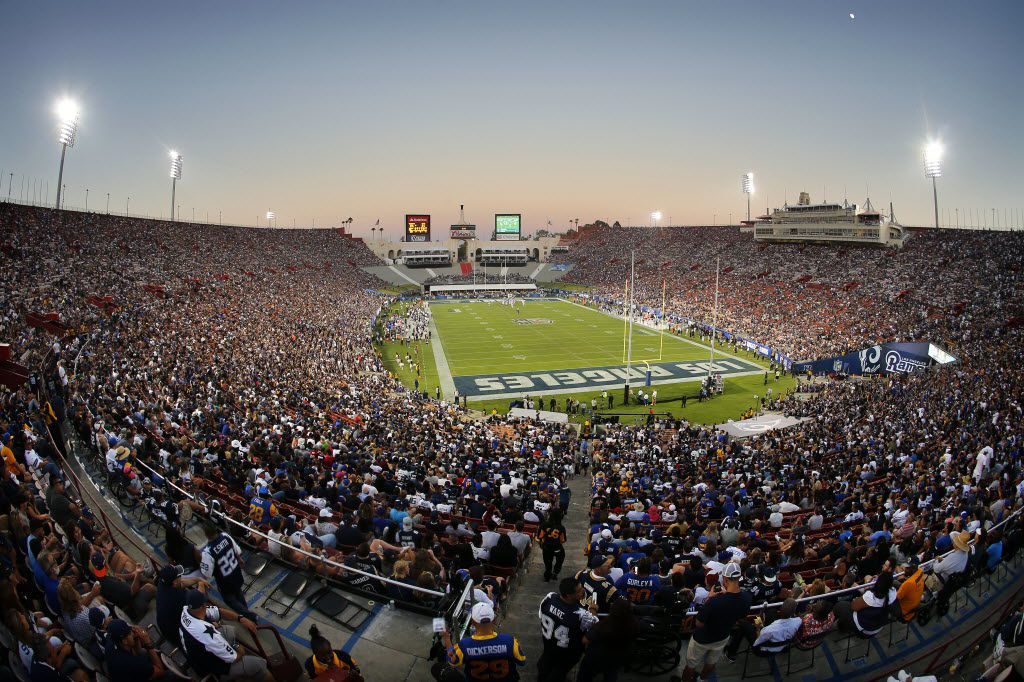 The Ravens head west to take on the defending NFC Champs on Monday Night Football. Here’s how we see it playing out…

The Ravens are riding a six-game winning streak as they take on the Rams in the historic L.A. Coliseum. Led by Lamar Jackson, the Ravens offense leads the league in points per game (34.1) and rushing yards (203.8 yards/game). The Ravens offense ranks second in total net yards/game (428.6) and in third-down efficiency (49.1%). So how will that factor into tonight’s contest.

Jackson presents problems, particularly for teams that haven’t yet seen him. It’s not a question of if but when will the Ravens single caller break contain and produce an explosive play. The Rams are desperate and really need to hold serve at home. But will they?

• The Ravens have won their last 4 games by 14 points or more, 25.3 on average. That’s about to change tonight.

• The Rams will try to shorten the game with a steady diet of Todd Gurley. Despite the Ravens league-leading time of possession average/game of 34:20, the Rams will hold that advantage in this contest, 32:28.

• Sam Koch has punted just 21 times this season, only 3 times over the past three games. Tonight, Koch will match that total and on two of his three punts, he’ll pin the Rams inside the 10.

• Cooper Kupp will be a big problem for the Ravens. He’ll post more than 100 receiving yards, while racking up YAC on underneath crossing routes. He’ll score once.

• Marcus Peters will put his great instincts to use and combined with knowledge of former teammate Jared Goff’s tendencies, he’ll come up with a game altering INT in the 4th quarter. They’ll call is poetic justice.

• When Lamar rushes for 70+ yards, the Ravens are 10-0. He WILL eclipse that total tonight.

— The Ravens have already shown they can win on the “left coast” with the 30-16 victory over the Seattle Seahawks. So, the team has confidence heading into this game.

— Marcus Peters played down his return to Los Angeles this week. But don’t be fooled. Peters is a cerebral player and knows the tendencies of Jared Goff. Look for Peters to make a game-changing play.

— The Rams might have the best front seven Lamar Jackson has faced. [edit: an earlier version of this article stated that the Rams had a bye last week. This has been removed, as they played the Bears in Week 11]. Aaron Donald, Dante Fowler, Michael Brockers and Sebastian Joseph-Day are game-wreckers.

— Los Angeles will struggle to move the ball, but the Ravens will also face some matchup challenges. It’s also a must-win for the Rams. This will be the Ravens’ final hiccup before the postseason. 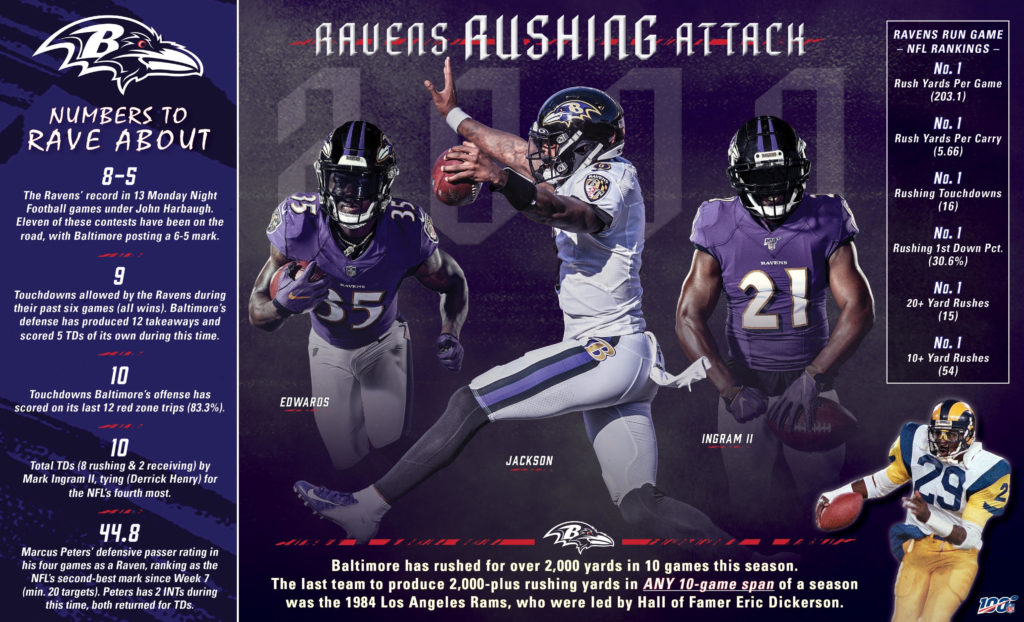 The Wade Phillips-Greg Roman, and Sean McVay-Wink Martindale chess matches in this one will be worth the price of admission. In addition, with a Ravens win and another highlight-reel run on Monday Night Football, Lamar will cement himself atop the MVP race (both occur).

I’ll keep it short, as usual, and leave the deep prognostications to my colleagues. Like I’ve said, I’m going to keep riding this wave until it crests and throws me, tumbling, into the shallow sand beneath. Here’s to that not happening until some time in the Autumn of 2020.

Week in and week out, we seem to keep coming back to thinking the Ravens have to lose a game at some point, right? This is yet another week with this sentiment. The Rams possess the front seven to create havoc and be a true test to Lamar Jackson and the offense.

The Rams also possess the weapons on offense to create some challenges for Wink Martindale and this Ravens defense, a unit that has been highly successful the last few weeks or so. This is a matchup that is beyond worthy of prime time.

-Jared Goff has been questionable at best recently, and that’ll continue. With a weaker offensive line, the Ravens will get him for 4 sacks and an interception.

-The Rams will be the first team in weeks to get behind the Ravens secondary and will score a long touchdown.

-The Ravens will commit to making the Rams offense be one-dimensional, and will stuff the run. I’m thinking 10 carries for 40 yards for Todd Gurley.

Jackson and the Ravens offense will face off with Jalen Ramsey and Aaron Donald (just give him the DPOY again, already) and many fans are in a panic. As for yours truly?

Analysts and fans alike (well, some fans) panicked when Jackson went to Seattle to take on the Seahawks… then again when they faced the Patriots… and again facing the Texans…

All three wins, with the latter two in ridiculously convincing fashion.

In essence, opposing defenses need to pick their poison, and for some reason, they always seem to pick wrong? Funny how that works…

Donald will be a force to reckon with, but Lamar’s mobility will help nullify that facet of the Rams defense, and we’ll see a heavy usage of quick hits to Mark Andrews, Nick Boyle, and Hayden Hurst in the pass game this week to help alleviate Donald’s constant pressure. The trio will account for 120 receiving yards and a touchdown (Mandrews).

Likewise, Hollywood Brown (no presence on the injury report for the first week since Week 5) will see some quick hits and use his speed to chunk YAC all day. Call it five receptions, 70 yards and a score for Brown.

Add in a Lamar rushing touchdown and the Ravens will throw 24 points at the Rams defense. Understandably some may scoff at 24 points with a ‘but the Rams have given up 11 PPG over their last four!,’ to which I simply point out the Falcons (18th in PPG), Bengals (29th in PPG), Steelers (24th in PPG) and Bears (27th in PPG) are nowhere close to the Ravens offense (1st in PPG).

Defensively? Yea. We’re getting that Marcus Peters pick six. Jared Goff has been anemic in 2019, and even with his trio of wideouts back in action (Robert Woods returning from personal matter, Brandin Cooks returning from his 33rd concussion or something), it won’t matter – the Ravens DBs will have the wideouts on lockdown come Monday night. As for Todd Gurley, I’m a believer that last week was an anomaly more than a trend starting. Sean McVay will look to throw it around more than run it into the stout Ravens D-Line, and regardless… he’s gonna have a bad time.

Goff throws for 220, a touchdown and two picks (Peters pick six, Earl Thomas), with 90 of those yards in the hands of Cooper Kupp.

The Rams score late to make it look closer than it is, but the Ravens head home to Baltimore with a winning record officially on the books.

— The Ravens are 3-0 wearing their color rush uniforms, and this is yet another huge game to win, so maybe there’s some good juju there.

— Going to LA to face the Rams will prove tougher than it was last year facing the Chargers. The Rams are an uber-talented squad on the verge of being unlocked. This game, they’ll show signs of doing that.

— This game will be tight from start to finish, and somewhat surprisingly, it will be low scoring. Both QBs throw an interception – Lamar’s first since Pittsburgh – and Ravens fans will be left biting their nails all night. BUT…

— While the offense sputters more than we’re used to, Lamar orchestrates two key fourth-quarter drives, one a TD and one for a clutch FG by Tucker.

–s Jared Goff’s interception will come late, and when it’s in the hands of Chuck Clark, Ravens fans will know the team is going home with a W.

The Ravens are now the heartthrobs of the NFL, and Lamar is now under the microscope more than he ever has been before. No lights shine brighter than L.A, and it is going to be very interesting to see how the Ravens are going to attack this game.

The Rams have the best player on the planet in Aaron Donald, but the Ravens offense is built to essentially nullify his talent. As great as he is, this offense doesn’t complicate his position, but it makes it really hard on the safeties and linebackers. Corey Littleton and Eric Weddle will be the only players that Baltimore would need to worry about if they attack the line, but I still see Mark Ingram and Lamar taking advantage of this matchup. Ingram will have 20+ carries for 150 yards and a score.

Lamar will have around 75 yards on designed runs, but he will try to do more damage through the air. The Rams host an underrated secondary, and that is a statement given Jalen Ramsey is their number 1 guy. That being said, the Greg Roman is going to do his work with the tight end group. As great as Littleton is in coverage, the same can’t be said for the rest of the group. Hayden Hurst and Mark Andrews will allocate 200 yards and score one TD each. Lamar will finish the day with 215 yards and 2 scores.

The Rams offense was once the most feared object in the NFL – today that does not apply. Their offensive line is one of, if not the worst, in the NFL. Jared Goff has struggled as a result. A lot of their offense was predicated on utilizing long-range play action passing, which they haven’t been able to do this year because of the atrocity on the line. Goff is not going to have an easy going this time, as the Ravens boast one of the top secondaries in football. As a result, the pass rush has been able to be more effective, given that coverage sacks present massive value. Goff will struggle throughout the night, only mustering 250 yards and a score to go along with one interception.

Todd Gurley, Malcom Brown and Darell Henderson will only muster 120 yards and a score, to finish off a frustrating night for the Rams offense.

In what could be a trap game, I expect Baltimore to nullify the once powerful Rams that will legitimize their contention not only in the AFC, but the rest of the league as well.

The Ravens have been the best team in football over the past month and they’ve demolished some of the other contenders for that title along the way. On paper, the Rams have the talent to be one of those top teams, but Jared Goff has struggled this season, which has held the Rams back.

With the league’s best defense since Week 7 coming to L.A., I don’t see Goff righting the ship on offense and until someone stops Lamar Jackson, how can you bet against him?

I’ll take the Ravens to cover.