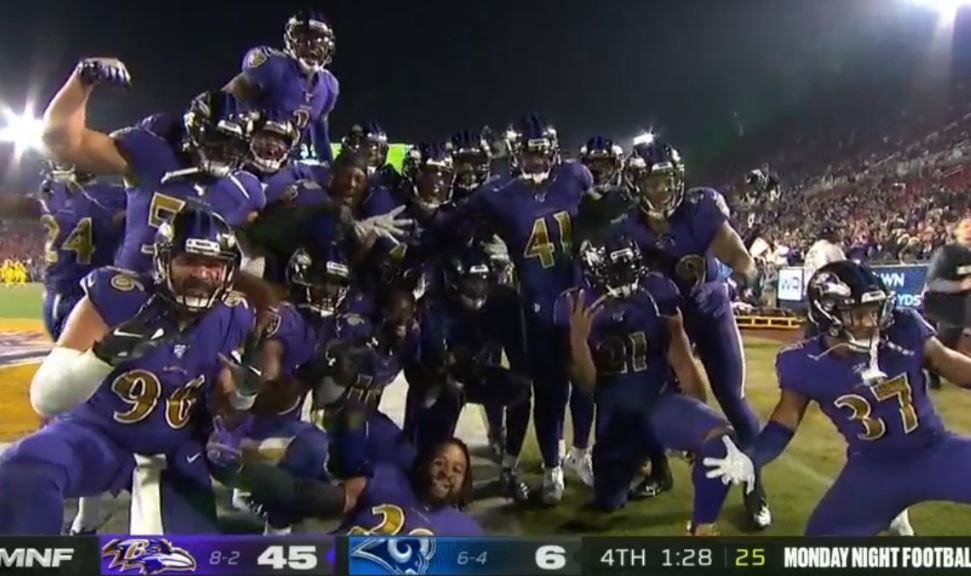 The Baltimore Ravens dominated the Los Angeles Rams in L.A. on Monday Night Football, taking a 42-6 lead through three quarters and change before they called off the dogs. RSR staff react to the win here.

“I didn’t think we was gonna do ’em like that.” – That was Earl Thomas, LAST WEEK. This week? Good grief. What can you say?

Lamar Jackson became the first player to throw five touchdown passes on his Monday Night Football debut. After THAT performance? He’s the MVP. It’s over.

This team is a juggernaut. I am PUMPED for Ravens-49ers.

There’s not much knee-jerk to this, the Baltimore Ravens are the best team in the AFC. In a game I thought would be closer, Lamar Jackson and the Ravens offense made mince meat of a Rams defense that prided itself on not giving a lot of points up. The Rams were set to finally hold the Ravens to a punt but nope, they had too many men on the field, the Ravens went for it and got it.

The Ravens are in the upper echelon of teams in the NFL. This isn’t even debatable anymore. I’m trying to find a defense that can stop this offense and I keep coming up empty. Maybe the 49ers can. But we’ve asked that question every week, right?

What the hell just happened? That’s what the Rams have to be saying to themselves.

Where the hell was Aaron Donald? That’s what I’m asking myself.

What a performance by Lamar Jackson. He now leads the league (tied) for touchdown passes, and hasn’t thrown an interception in six straight games. The defense played incredibly well, with Marcus Peters clearly enjoying himself, and my guy Jimmy getting his second career sack.

But the story of the night is of course the seventh straight win for the Ravens.

Is this a championship team? I can say unequivocally, it absolutely is.

There isn’t much to say because everyone’s jaw is still dropped.

The Rams were embarrassed. The Ravens solidified their championship candidacy.

The 49ers are going to be their toughest test yet, and is must-watch football against two great coaches, teams, and organizations.

— Everything I’ve said over the last 7 weeks still stands true. The Ravens are a complete team and have shown they can win in any way they want. That doesn’t mean they’ll go undefeated from here on out, but it means that they have just as great a shot as anyone else to win the Lombardi.

— Lamar Jackson is a different animal than anything else this league has ever seen. Nobody knows how to stop him and if he continues to progress as a passer, I legitimately don’t know how anyone ever will. Even on his incompletions, throws are close and essentially on the money.

— The Ravens have a true ball-hawk in Marcus Peters. I’d love to see the team spend the money to keep him, as he fits this organization and team very well.

— Mark Ingram is a bulldog and looks poised to be the ultimate late-season running back. But what’s even crazier is Gus Edwards is really good, too. If the Ravens have the lead in the second half of a game, I’m not sure they’ll ever give it up.

— Just when the team looks like they solely work through the tight ends, Lamar hits the wideouts for their biggest game. Willie Snead had two touchdowns. Hollywood Brown had two touchdowns. Seth Roberts was involved. Miles Boykin had an acrobatic catch. Unbelievable.

If the Niners can’t beat us Sunday, I don’t know who can.

Welp, so much for Aaron Donald’s claim of a game plan that would bottle Lamar up. From the outset the Rams never looked like a team that felt very confident about their chances. On offense the Ravens operate in a difficult space where they’re methodical and efficient while simultaneously being explosive and aggressive. Lamar Jackson’s command and continued understanding of what defenses are doing is a joy to watch in real time.

Speaking of joys to watch, Wink Martindale continues to press all the right buttons at the controls of what now looks likes one of the best defenses in the league. Imagine saying that after how things started?

A huge test is coming next week but this one should be savored. Sure the Rams aren’t what they were but the Ravens flat out dismantled a team who came into the season with legit title hopes.