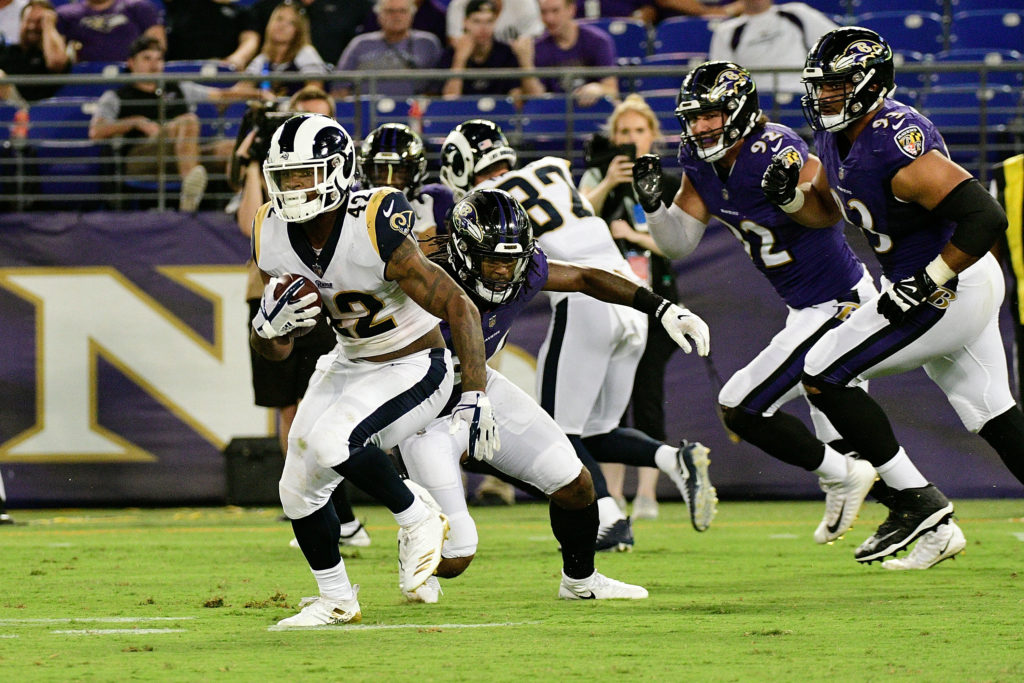 The defense is a different matter.

Los Angeles has the best defensive line the Ravens have faced all season.

Baltimore’s offensive line has gotten accolades all season, but it will have to show its mettle against defensive tackle Aaron Donald and the rest of his crew.

“So, they’re really talented, and they do a good job.”

Indeed, this group will be gunning for Lamar Jackson.

Rams defensive coordinator Wade Phillips is built in the same, old-school mode as Haebaugh. Phillips also had plenty of tape to study in preparation for this game.

Jackson is going to see new defensive looks. However, Ravens offensive coordinator Greg Roman will also unveil some new strategies for the Rams. Jackson has to be wary of cornerback Jalen Ramsey and safety Eric Weddle, who spent three seasons in Baltimore.

“We’re more focused on the reality of, ‘Hey, we have a big game this week against a really good defense, and we really need to go through our process that we do every week.’ Whatever you do is what it is,” Roman said. “It speaks for itself. Everybody is aware of it, as far as performance and how we can improve and what we could do to take the next step, the next logical step for us. Or, ‘How do we attack the Rams?’ because they’re a very unique defense. So, that’s really where all of our energy and thought is going.

“Wade Phillips [Rams defensive coordinator] has been doing this at a high level for a long time. It seems like he always has that guy, wherever he is. And he’ll move him around and make it hard on you. It requires a lot of film study and a lot of specific gameplan stuff.”

This could be a game where the Ravens defense carries the night.

The Ravens have already beaten some of the league’s most elite quarterbacks in Russell Wilson, Tom Brady and Deshaun Watson. Rams quarterback Jared Goff is not in that class and the Ravens are going to keep him under pressure and force him to make mistakes. Goff has thrown for 2,783 yards with 11 touchdowns and 10 interceptions.

Ravens defensive tackle Michael Pierce is still dealing with an ankle injury and likely will not be able to play Monday night.

“I don’t think Pierce will make it,” Harbaugh said. “We’ll see, we’ll see. He didn’t practice too much. He practiced a little bit on Thursday. He’ll be, probably, doubtful. If we need him and he can go, he would, but I don’t foresee that right now, just without the practice.”

Also, look for fellow cornerback Marcus Peters to have a big game. GM Eric DeCosta acquired him from the Rams on Oct. 15 for second-year linebacker Kenny Young and a 2020 fifth-round pick. Baltimore has gone 4-0 with Peters in the lineup.

Peters is smooth, and while he claims there is no measure of revenge, he is smooth and a student of the game. Peters can exploit Goff.

“I don’t have a chip on my shoulder. How did it end? I got traded, and I’m liking the situation I’m in right now,” Peters said. “And I just keep moving forward. I don’t need any other stuff like that to be … I understand the business of football.”

The Ravens, who are 8-2, are three-point favorites entering the game.