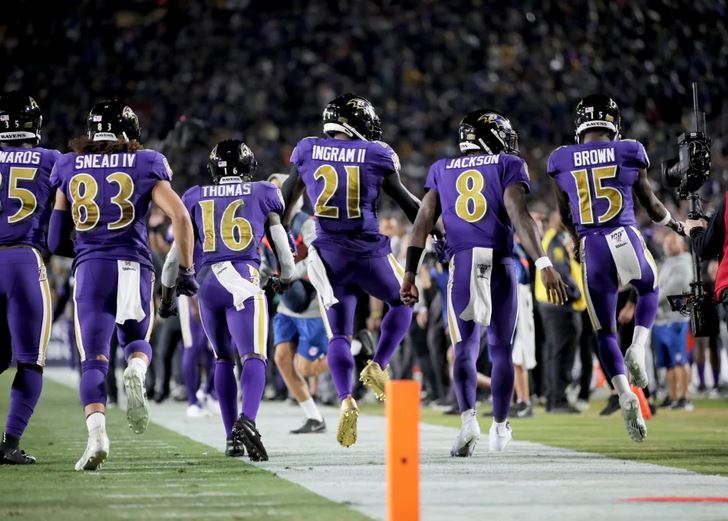 Seriously, it feels like Oprah out here slinging A’s around, but how could you not? It was an absolutely dominating performance on Monday Night Football for the Baltimore Ravens, as the Los Angeles Rams took a 45-6 beating in their own house.

Our first set of A’s go out to the offensive weapons…yeah you heard me, the Baltimore Ravens have weapons on their team. The team has come a long way from the days of having just a few guys who could make plays. Now Ravens fans are getting treated to multiple touchdown games and 30+ point games regularly. Heck, that’s three straight games of 40+ points and five straight of 30+.

What a time to be part of the #RavensFlock.

What an absolute privilege to watch the development of Lamar Jackson. This kid is special and, in just one offseason, he has done what many said was impossible, and completely refined his mechanics as a passer. The running back narratives has been completely shattered and, make no mistake about it, as of Week 12, Lamar Jackson is the NFL’s Most Valuable Player.

Well, if you asked Lamar, he’d say a Super Bowl.

In fact, Lamar spent his presser talking about the ‘mistakes’ he made in this game…

In his presser, what did he talk about?

Missing the slant to Marquise Brown that was thrown slightly behind him for what would have been his 5th TD (He later hit Snead).

What a player! Who doesn’t want to go to battle with him?

Looking back at the 2019 offseason, it’s hard to believe that the Ravens locked up Mark Ingram for only $5M per year. He has fit this offense like a glove and has been one of the most productive running backs in the NFL. He now has 11 total touchdowns (nine rushing, two receiving) in 11 games.

Gus Edwards continued his strong play as the complement to Ingram (or as I like to call him “Hammer 2” to Ingram’s “Hammer 1”), and Justice Hill had a few flashes playing with the 1st unit. Just a dominant day on the ground for this unit paired with Jackson’s additions on the ground.

There’s been mention that Marquise Brown may only be at about 75% out there. Well, if that’s 75% of Marquise Brown, I just can’t wait for 100% in this high-flying offense. It’s so encouraging that a 1st round WR is actually producing consistently. It was Brown that got the Ravens going today, as he caught the first two touchdowns from Jackson for six and 18 yards. He’s now at 35 catches and six TD on the year.

Miles Boykin also hauled in a beautiful 39-yard grab from Robert Griffin III. It was much needed for Boykin who has faded from the game plan in recent weeks. The story of a rookie WR is a complicated one and it’s all about positive momentum, so Boykin will carry this forward and look to build on it, which is nothing but good news for this offense.

Willie Snead also hauled in two touchdowns and Seth Roberts made some grabs. This was the best overall game from the WR corps this year.

A quiet day from the Ravens tight ends? Well I don’t say that very often. Mark Andrews brought in two catches for 45 yards and Nick Boyle had a grab but that was about it for this group. The TEs didn’t really need to come up big with the WR doing most of the work, so consider this a nitpicky criticism. I mean, I can’t say positive things ONLY, can I?

Seriously, going into this game I was terrified of Aaron Donald, and I have no shame admitting just what a cold take that was. I mean this was me at 11:30am.

Laugh it up, it is what it is. The Ravens offensive line played a fantastic game against a very formidable front 7 of the Rams. Matt Skura did leave the game, and we’re saying a big ‘prayers up’ for Skura, who has been awesome this year. In his relief, Patrick Mekari played excellent and the OL didn’t look like it missed a beat. This is something to keep an eye on, but Mekari played very well in the preseason, so the depth is there to fill the spot, should Skura miss time. 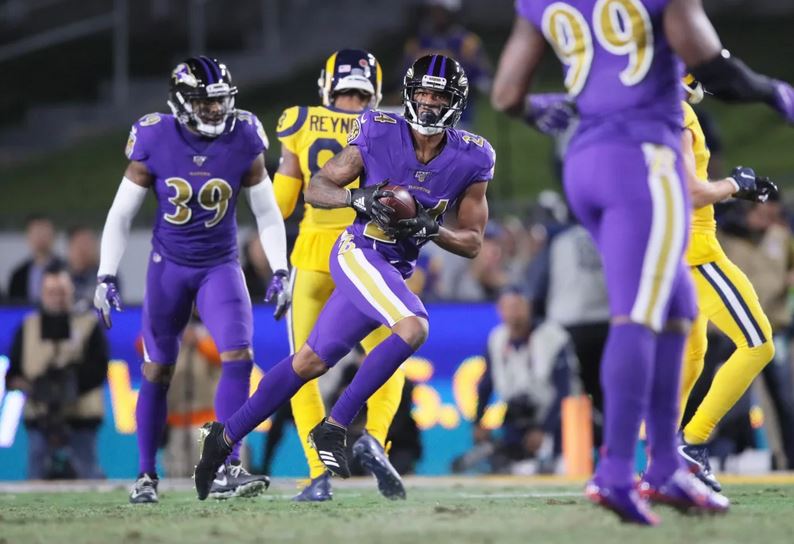 This is the kicker with this team. For years the Ravens were a dominant defensive football team, but just couldn’t put together a consistently good offense. Then they won a Super Bowl with a very balanced team. So naturally we should be at the other extreme, right? A dominant offense with a mediocre defense…

Nope, this defense is legit. The adjustments made since losing to the Cleveland Browns have been phenomenal and have completely changed this unit. The Rams were only able to muster 221 yards and six points in their own house. The Ravens aren’t scared of anyone and it’s only going to get better.

Todd Gurley is the catalyst of the Rams offense. When he’s rumbling, they can set up play action and their WR’s become very dangerous. Well, it’s hard for him to get going when the defensive line completely controls the line of scrimmage. Even without Michael Pierce, the Ravens did just that. The additions of Domata Peko and Justin Ellis didn’t show up in the box score in a big way, but they completely clogged up the middle and took the run game out of the equation.

Matt Judon added more to his case to get paid this offseason. After an early injury scare, he came back out and added his 7th sack of the year. Jaylon Ferguson continued his strong development during the season and stood out with some nice edge setting, which has been a huge improvement in his game. Great showing from the 3rd round pick.

Every week I’m blown away that this group was assembled mid-season. Patrick Onwuasor returned with more playing time tonight and looked solid once again. Josh Bynes continued his solid play. There’s not much to say; this group is just super solid and are a lot of fun to watch film on. They’re very sound and execute their assignments like any coach would ask.

The Marcus Peters revenge game went according to plan. Peters had some extremely nice tackles, which is ironic because he was criticized for not wanting to tackle in LA, but he sealed it with another interception and a pass deflection. I said at the time that Marcus Peters was a much better investment than Jalen Ramsey because of what the compensation was, and the results speak for themselves. The Ravens gave up very little and got a playmaking complement to the secondary. It’s great for the Ravens and it was excellent asset management by Eric DeCosta.

Jimmy Smith added an interception at the end of the game and has looked great since returning from injury. The trio of Jimmy, Peters and Marlon Humphrey with depth from Brandon Carr is the top CB group in the NFL and Earl Thomas is playing very well in the deep center field role. It’s exciting times for this group.

Even the special teams looked excellent tonight. De’Anthony Thomas made a couple nice punt returns, including one for 20 yards. Justin Tucker kicked the crap out of the ball and Sam Koch nailed his only punt inside the 20.

John Harbaugh has been the perfect fit with Lamar Jackson. When Jackson spoke about Harbaugh believing in him, when referencing the playoff game last year, you could tell it was genuine. That decision denoted Lamar Jackson as his guy, and that bond is stronger than any statistics, or analytics, can show you. There’s a lot of value in a coach that can get results out of his players and Harbaugh is doing it week in and week out. I mean he was even pumping up the crowd while the Ravens were in victory formation.

So I went away from giving Lamar Jackson the game ball every week because it was kind of boring. I’m going to continue with that trend, even though you know he gets the game ball, and this week it goes to Mark Ingram. Ingram continues to feast and find pay dirt for the Ravens offense.

A big kudos is deserved for Patrick Mekari as well. It’s not as easy to enter the game as a rookie against a guy like Aaron Donald coming at you, but he held his ground and played very soundly.