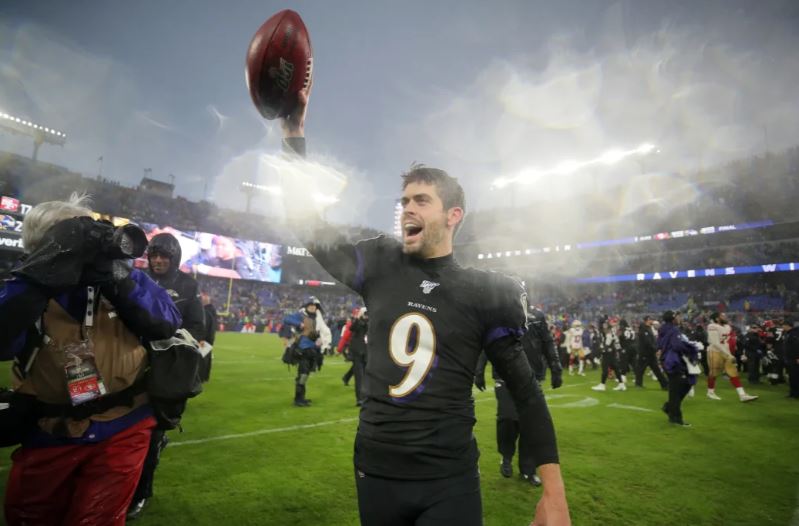 This is turning into a potentially magical season for the Baltimore Ravens.

First, they made their case as the best team in the NFL by knocking off the San Francisco 49ers 20-17 in Week 13.

Hours later, the New England Patriots lost 28-22 to the Houston Texans, which allowed the Ravens to take over the No. 1 spot in the AFC playoff race.

Perhaps most importantly, the Ravens players and coaches are staying grounded.

The focus has been on the team in front of them and that strategy is paying dividends.

“I think this whole team is living in the moment for these moments, and it’s a really special group,” said Justin Tucker, who made the game-winning field-goal as time expired against San Francisco. “I’m just happy to be a part of it. I’m blessed. We just broke down in there, and the message was ‘trust yourself, trust your teammates and trust God.’ That’s what this team is doing right now, and it’s really cool to see.”

At 10-2, the Ravens are a lock for the postseason, but the seeding remain uncertain. They have a three-game lead in the AFC North with four games remaining.

The Steelers essentially knocked Cleveland out of postseason contention with a 20-13 victory over the Browns on Sunday. Pittsburgh improved to 7-5 and is very much alive for a playoff berth. The Steelers close out the season against the Arizona Cardinals, Bills, Jets and Ravens.

The Patriots are suddenly in turmoil because of their lackluster offense. New England has another tough test this week with a home game against Kansas City before closing out the regular season against the Bengals, Bills and Miami Dolphins.

Still, the Ravens now control their own destiny to secure that No. 1 seed and potentially host an AFC championship game in Baltimore for the first time since Jan. 3, 1971.

The biggest difference between the Ravens and the rest of the playoff contenders is chemistry.

Ravens coach John Harbaugh had a heated exchange with 49ers safety Marcell Harris after safety Jimmie Ward tackled Lamar Jackson out of bounds and was initially penalized before the officials picked up the flag.

“[Harbaugh] was saying like it was a dirty play on Lamar,” San Francisco cornerback Richard Sherman. “The quarterback is running just like a running back, and if you don’t touch him, he runs up the sideline for 80 yards, and if you touch him, then everybody is throwing a hubbub like he wasn’t going to run it.”

Nonetheless, the Ravens players rallied around their coach, It’s that type of unity that has been emblematic of the season.

Overall, the 49ers had two roughing-the-passer penalties against Jackson.

“We’re a family, and when you mess with one of us, you mess with all of us,” Ravens running back Mark Ingram said. “That goes from the head coach all the way to anybody on the team. We’re going to have each other’s back, fight for each other, and if we feel like one of our teammates got wronged, treated unfairly, we’re going to get at you. That’s just the atmosphere we have, the family atmosphere, the brotherhood we have.”

That unit has transferred to the stands.

M&T Bank Stadium is back to being a loud venue at full capacity.

Imagine another showdown with the Patriots for the AFC title in Baltimore.

That dream has officially become an attainable goal.