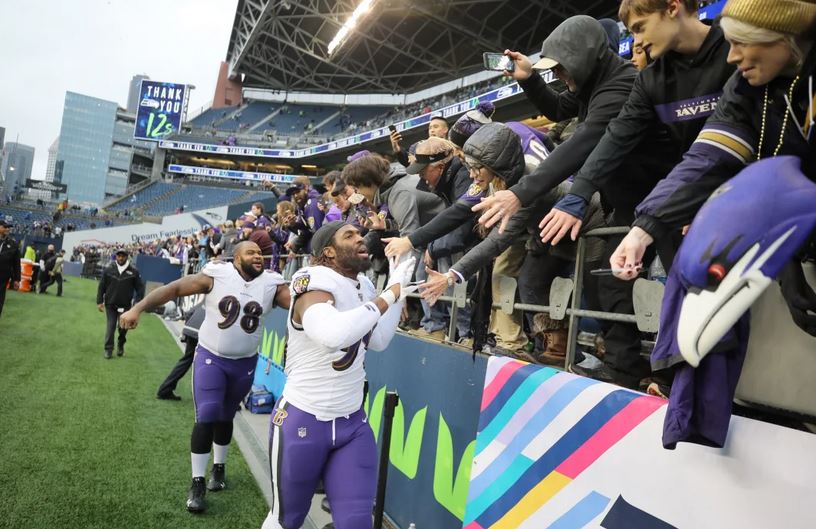 Former Ravens coach Brian Billick borrowed the term “Festivus” from the TV comedy Seinfeld as a code word for the playoffs.

It was a light-hearted way to keep his players focused, and perhaps not jinx their improbable run to the Super Bowl.

The Ravens coach dismissed any question about the Ravens taking over the top seed in the AFC playoffs. After all, there are four games left in the regular season and the entire landscape could change.

For example, in the span of a day, the San Francisco 49ers went from the No. 1 seed in the NFC playoffs to No. 5 after they lost to the Ravens on Sunday and then Seattle beat Minnesota on Monday night.

Baltimore is riding an eight-game winning streak and has a three-game lead atop the AFC North at 10-2. The Ravens can clinch a 2019 postseason spot with a win over Buffalo, and can clinch the AFC North with a win coupled with a Steelers loss (or tie) against Arizona this weekend.

Even with the “P” word within his grasp, Harbaugh is not taking anything for granted.  The Ravens have been successful by fully focusing on their next opponent, and they are not going to deviate from that strategy.

[Related Article: What Did We Learn v. 49ers]

Outside of the Ravens’ practice complex in Owings Mills, there has been non-stop chatter about the team reaching this season’s Super Bowl.

Caesars Sportsbook has Baltimore at +250, just ahead of the New Orleans Saints at +350 to win Super Bowl LIV. BetOnline has the Ravens as 3/1 favorites to win the Lombardi Trophy.

None of this matters to the Ravens players and coaches.

Championships aren’t won in November and December. The playoffs bring a new intensity and there is no margin for error in the single-elimination tournament.

Ravens quarterback Lamar Jackson has exemplified this ideal. While he is a leading candidate for league MVP, he has consistently brushed off any questions about personal stats or awards.

His entire focus has been on winning the Super Bowl. That was a proclamation moments after he was taken with the 32nd pick in the 2018 NFL Draft.

If you are not a Lamar Jackson believer yet, watch this video from right after he was drafted.

Deion Sanders could see it in his eyes right after he was drafted.

Lamar Jackson promised the Baltimore Ravens a Super Bowl and I believe him. pic.twitter.com/0hTs4ugx9g

Jackson’s focus has become even sharper with each victory. He has put the team on his shoulders several times this season.

That’s one of the main reasons he has so much respect from his teammates.

“We’ve been believing in him since he’s been here,” right tackle Orlando Brown, Jr. said. “He’s somebody that comes in every day, works hard at practice, works hard in the film room and goes hard on Sundays. So, to me, his energy is so contagious. It’s been one of the reasons we’ve been able to win.”

Still, the Ravens once again have the city of Baltimore buzzing with excitement. The town could certainly use some positive news.

Just don’t expect the Ravens to get caught up in the 2019 postseason hoopla.

There is just too much work to be done.

So, the talk about qualifying for the playoffs and earning a No. 1 seed is all just that – talk … at least to the coaches and players.

If the Ravens extend their winning streak to 12 games to end the season, there won’t be any need to discuss any playoff scenarios: they will be No. 1.

“You control your destiny, in that sense, but they don’t have the No. 1 seed until they do the seeding. So, that’s four weeks away,” Harbaugh said.