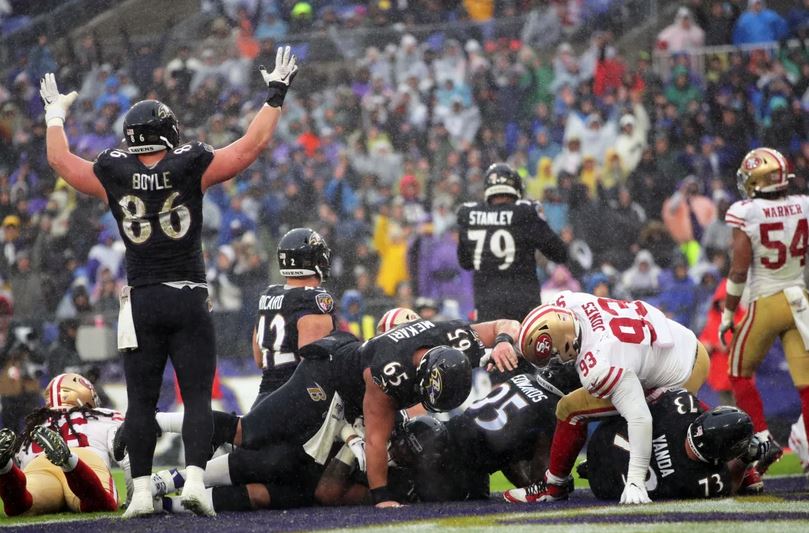 I did something a little differently during my re-watch this week. I spend a lot of time on the offensive side of the ball for obvious reasons, but I watched the defense much closer to key in on the edge players for the San Francisco 49ers.

It’s not the sexiest part of the game, but it’s fascinating to watch blocking schemes go to work. It’s a chess match within a chess match. The player that stood out to me was George Kittle. We all know what Kittle can do as a receiving tight end, but what goes unnoticed is how good of a blocker he is.

The 49ers tore at the edges of the Ravens defense to launch some big runs into the secondary. A lot of those were on the hind of Kittle’s edge blocking.

It really reminded me of the unsung hero of the Ravens offense this year, Nick Boyle. Boyle has quietly had one of the best seasons on the roster, but his impact doesn’t always go noticed.

The Impact of Nick Boyle

Boyle’s signature skill during his career with the Ravens has been his blocking. He catapulted himself into the conversation as the best blocking TE in the game and that reputation got him a three-year $18M extension this offseason.

Some of the reaction from the fan base was that paying a blocking TE might not be the wisest decision. However, those people were very quickly proven wrong. Not only has Boyle maintained his position as one of the league’s best blocking tight ends, but he’s put together a career year through the air. In only 12 games he’s set career highs in receiving yards, TDs, and Y/tgt, and did all of this with a 73.5% catch rate. With four games to go I have no doubt he’ll pass his current career high of 28 receptions as he already has 25.

All that said, it’s his blocking on which we need to shine a spotlight.

The assignments Boyle is given

The most notable thing that stands out to me is how much Boyle is asked to do within the blocking scheme. Tight end roles are usually pretty standard. Typically you’re an extra edge blocker, which includes chipping or double teaming defensive ends with the offensive tackle, taking on outside linebackers or defensive backs coming off the edge, and making level 2 blocks against linebackers and defensive backs.

Boyle is asked to do that of course, but he’s also been asked to routinely take on much more difficult assignments. He will be asked to take defensive ends one-on-one, or he’ll come across the formation in a split zone play call and take on the backside end, tackle, or linebacker.

Here’s a good example of just how complex his assignments can be. At 2:39 of the second quarter* on Sunday, Boyle lined up offset in the pistol and came across the formation with the assignment of blocking the defensive tackle. This run didn’t go for a big gain, but it shows what he’s asked to do. Not many tight ends get asked to take on defensive ends, let alone defensive tackles. He executes his block and uses a cut block to win the rep.

*Note: D.J. Jones was injured on this play, which is why we didn’t include a video of it. In no way are we trying to use that as a highlight. We’re merely referring to the assignment Boyle was given and how it’s not normal of most tight ends.

Perhaps the biggest impact Boyle has had in the run game is sealing the edge for Lamar Jackson in the read option game. Routinely when we breakdown the gap assignment of the run, it appears the left and right end have high yard per carry figures.

Typically this is because Boyle is the lead blocker when the gap assignment is the end. Here’s the breakdown on Sunday:

Runs off the ends were the most used on Sunday and they resulted in success on both sides. The YPC to the left were low, but they were able to get a TD off of it. To the right, they had a 6.45 YPC. The Ravens’ two longest runs were also off of runs to the ends.

Now of course, all of these weren’t run behind Boyle and the other tight ends deserve a shout out, including Mark Andrews for his block on the Lamar rushing TD.

Andrews attacks the inside shoulder of Deforest Buckner and just uses his posture to sink his hips and maintain the block. He understood that Buckner was going to try and contain so Andrews countered with just sealing the inside shoulder to create a lane off his inside leg. This is what I mean by a chess match within a chess match. Buckner has to pick his poison here and Andrews has to react. If Buckner goes inside he has to leverage his outside pad now and begin to drive to create the lane to the outside for Jackson.

Back to Boyle, here’s a few clips that stood out.

Now of course, the highlight here was Jackson’s juke. That was a thing of beauty and for Christmas I sent Santa a little note to get K’Waun Williams some ankle braces. However, watch Boyle from offset-r. As he goes out into his blocking lane, he sees two 49ers and has to pick which one to take on.

By picking the inside linebacker, he allows Lamar to make a move on the defensive back. I think he also picked the ILB because he doesn’t know yet if the ball was handed off to Mark Ingram. As he sees the ILB react to Lamar keeping the ball, he changes his course of direction and attacks the outside shoulder. If you pause the clip at six-seven seconds, you can see him change his course.

This isn’t a highlight block where he’s driving a guy, but he takes Fred Warner completely out of the play by doing enough to disrupt his path to the ball.

Ronnie Stanley is an athletic dude! Long pull, jumps over Mekari and still gets a piece of the strong safety in space. pic.twitter.com/KOOIAdDyB7

Shout out to Ronnie Stanley who may be competing for the US track team for the 110M hurdles! He’ll be the first 300-pound man to compete in the Olympic event.

Okay, so that wasn’t what I was looking at here, but watch Boyle. Again, it’s a Lamar keeper on the read option. Boyle engages his man and makes a very strong transition to his outside shoulder to seal him. If you pause at the 11-second mark, you see Boyle almost has his back to his man because he started to turn him. However, by then the damage was done and he was taken out of the play.

Had a block been made on the cornerback, Lamar would have had one his signature sideline runs where he just outruns everyone for extra yards. Nonetheless, Boyle clears out the path for Lamar to run.

I shared this clip in the write-up following the Patriots game, but it once again shows more of Boyle doing his thing.

Roman comes right back to the same formation on the next play. They run it to the right this time and when the iLBs react inside to the dive back (Edwards), Lamar keeps it, gets the edge and gets upfield for 18 yds. pic.twitter.com/9qEUAsNgiQ

On the first, Boyle creates the lead block for Ingram. On the very next play, Boyle is out in space and makes the block on Donte Hightower that gives Lamar extra yardage.

Nick Boyle is doing this every game and it’s been huge for Lamar Jackson’s success on the edges. Yes, he can juke people and do some incredible things, but these outside runs where he’s getting chunk yards are typically behind Nick Boyle leading the way.