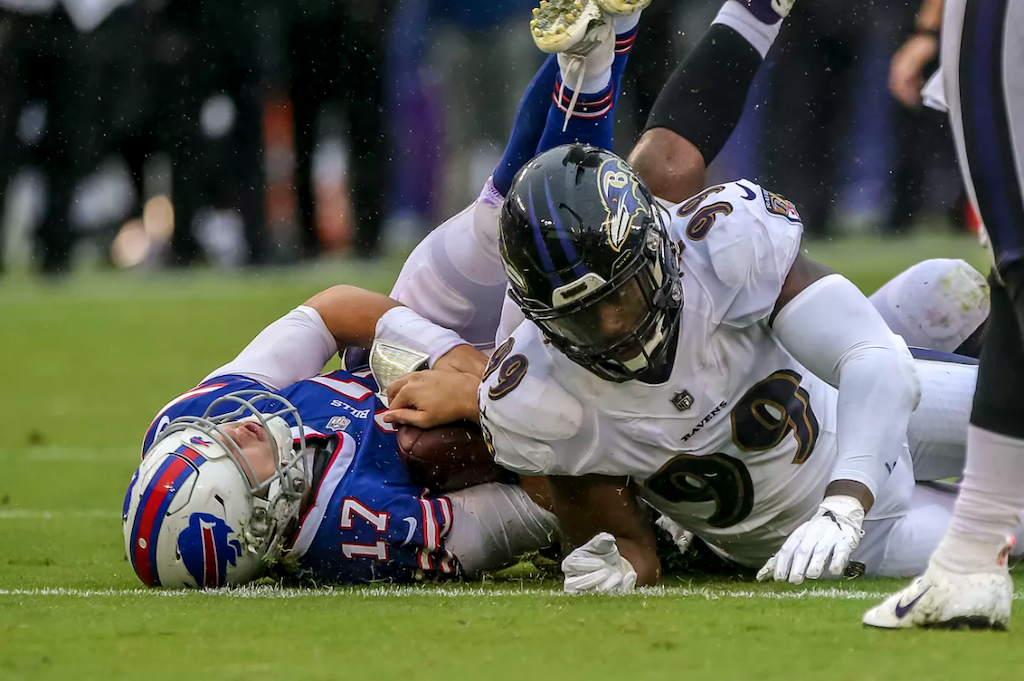 The Buffalo Bills have one of the best defenses in the NFL. They rank 3rd in pass yards allowed, 14th in rush yards allowed and 3rd overall. Unfortunately for the Bills, the Ravens have made beating well regarded defenses somewhat of a habit so far in 2019. In just the last month, the Ravens have beaten two defenses that were ranked first at the time they played.

On Sunday Night Football, Greg Roman’s offense hung 37 points on a Patriots defense that was being talked about as an all-time great unit in the lead up to the game. Just last week, Lamar Jackson and the Ravens scored 20 points in bad weather against a 49ers defense that is on pace to have the statistically best passing defense in modern NFL history. With Lamar Jackson and a well-constructed scheme, the Ravens have made it abundantly clear that they can impose their will on any defense.

If wins over these defenses weren’t impressive enough, the Ravens have recently shown their ability to erase some of the NFL’s best players. When the Ravens played the Rams on Monday Night Football, they managed to hold two time NFL Defensive Player of the Year Aaron Donald to just one tackle. Besides what the box score shows, Donald was rarely heard from all night and didn’t come close to being the game wrecking DT that he can be. Last week against the 49ers, the Ravens limited Defensive Rookie of the Year front runner Nick Bosa to only one tackle. Normally a disruptive force off the edge, Bosa was almost erased from the stat sheet by the Ravens.

While he has a very long way to go before he is mentioned with the likes of Donald and Bosa in terms of production, Ed Oliver has the potential to be the most disruptive player on the Buffalo defensive line. The 9th overall pick in the 2019 draft, Oliver was sometimes compared favorably to Donald in the lead up to the draft. An elite athlete at the position, Oliver possess the rare ability to get off the ball so quickly that he’s in the opponent’s backfield before the play has a chance to develop. The biggest pre-draft knock on Oliver was his size. Although he is officially listed at 287 pounds, it is suspected that his playing weight is somewhere closer to 275 pounds. To limit Oliver’s ability to be a disruptive force in their backfield, the Ravens should run the ball at Oliver and overwhelm him with double teams by much heavier offensive linemen on Sunday. And if this was offered as a prop bet at Canada Online Casino, it would be a worthy wager. 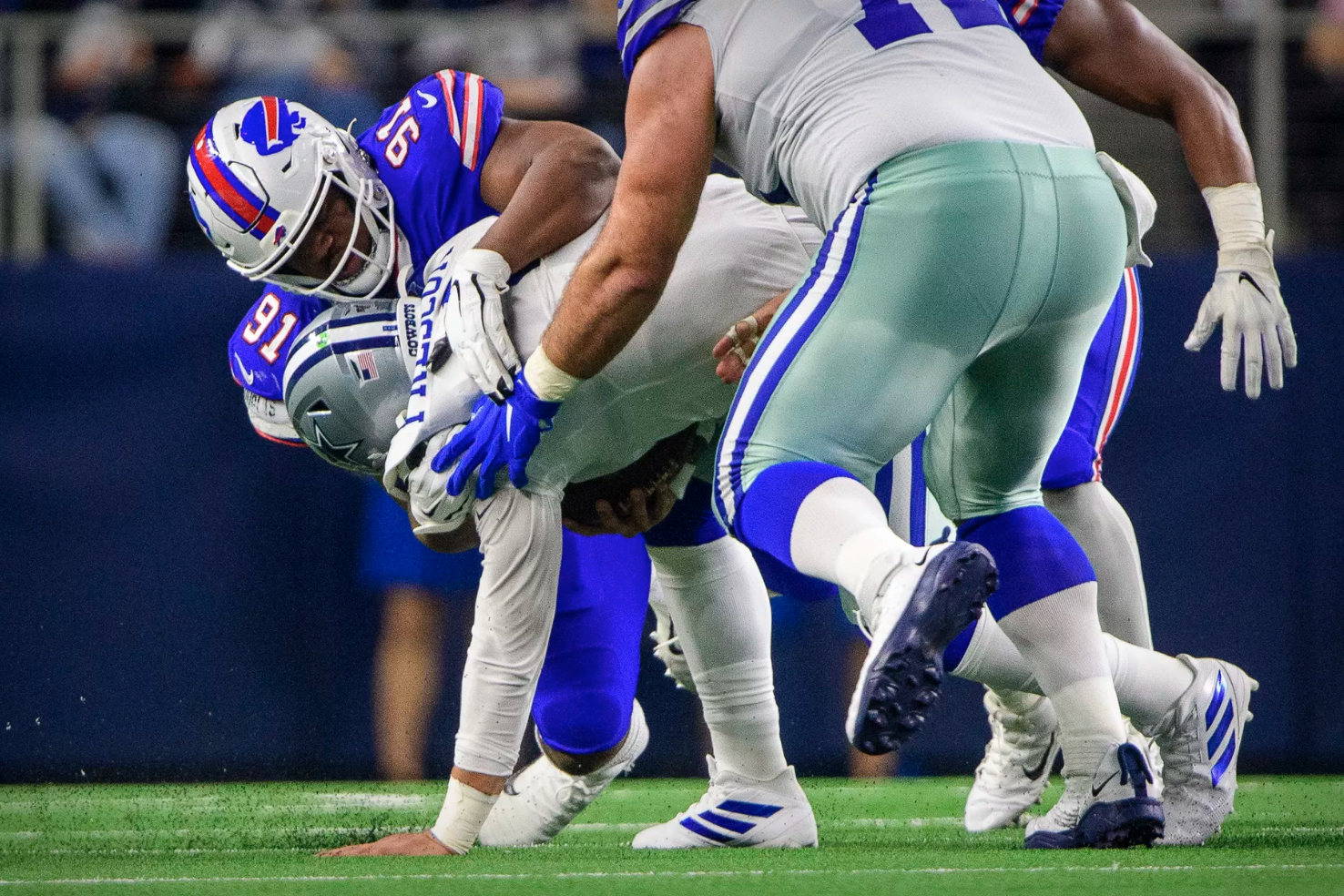 A big part of why the Bills are so good on defense is that they play fast and are highly aggressive. With their confidence bolstered by a talented secondary that includes one of the league’s best young CBs in 2017 first-round pick Tre’Davious White, the Bills are not scared to send the blitz. Through 13 games this season, the Bills defense is 10th in blitzes sent. While they lack a pass rusher who is a household name, they rank 8th in the NFL with 37 sacks on the season.

At this point in the season, NFL defensive coordinators understand that it is almost necessary to force the Ravens into a few turnovers if they hope to beat the NFL’s best team. As a counter to the aggressive nature of the Buffalo defense, the Ravens need to incorporate the screen into their game plan. Throwing a few slip screens to Mark Ingram or Justice Hill will keep the Bills defense honest and could result in an explosive play for the Ravens offense.

3) Throw to TEs Underneath

It’s no secret that the overwhelming majority of the Ravens success through the air has come via the TEs. The trio of Andrews, Boyle and Hurst may be the best TE group in the league. While they’ve been widely lauded for their blocking ability and value to Baltimore’s prolific rushing attack, their contributions to the passing game shouldn’t be easily forgotten. Mark Andrews is fourth among TEs in receiving yards and leads all TEs with seven TDs. Hayden Hurst has come up with clutch catches on multiple occasions and Nick Boyle is good for a few short receptions each game. 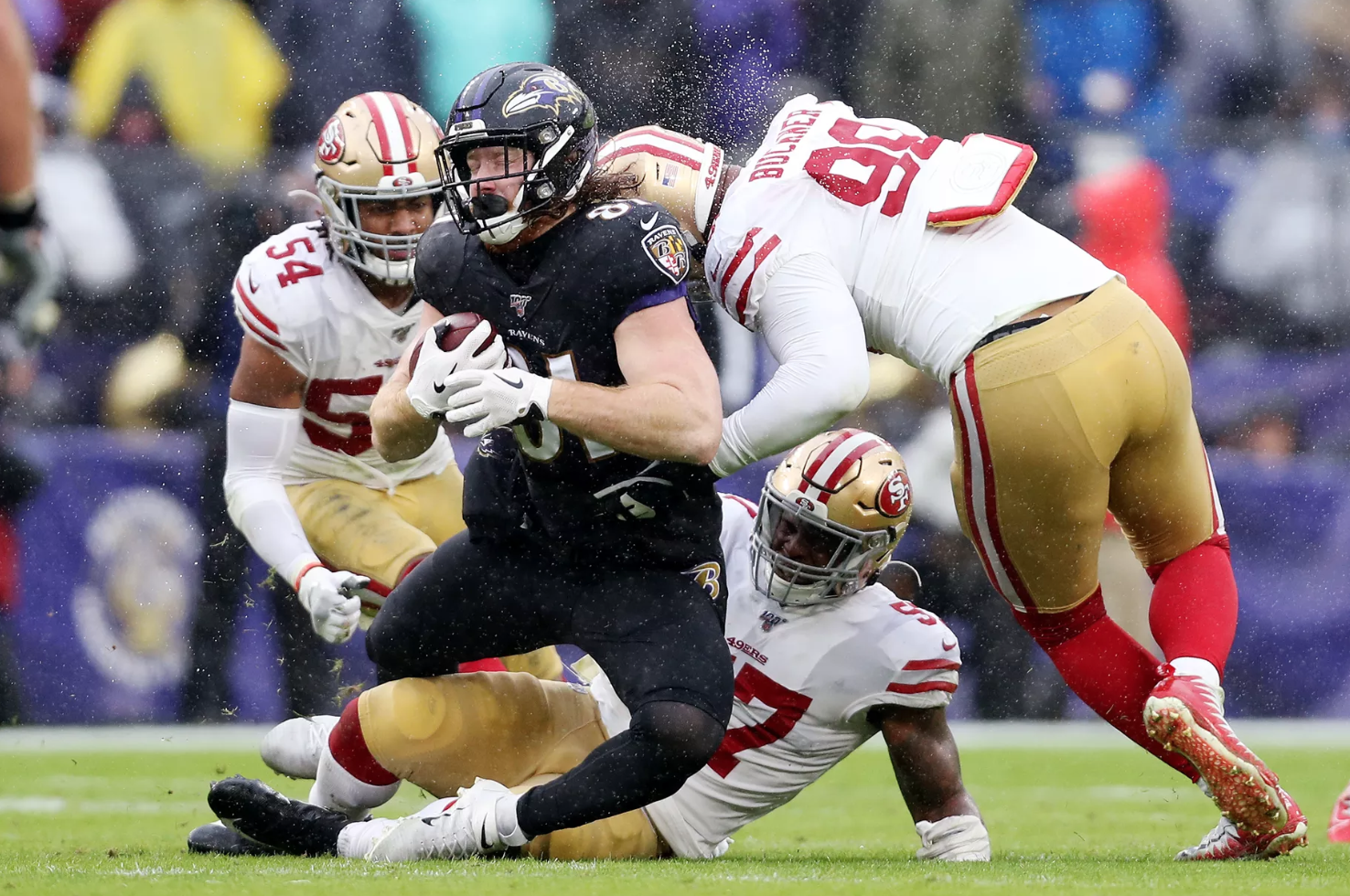 Against Buffalo, Lamar Jackson should look for his TEs in the underneath zones. When watching film, it becomes quickly evident that the Bills inside linebackers like to get deep drops on their zones. Tremaine Edmunds and Matt Milano have shown a tendency to read pass, flip their hips and quickly move towards their assigned zones. While that tendency gives them the ability to protect the seam, it leaves room underneath. Lamar Jackson and the Ravens TEs should have no problem exploiting a hole in the Buffalo defense for a few easy first downs on Sunday.

In Week 13, the Ravens faced off against the San Francisco 49ers second ranked rushing attack. Led by the blocking of FB Kyle Juszczyk and TE George Kittle, the Niners rushed for 174 yards against a typically strong Baltimore run defense. On their way to surrendering their second highest rush total of the year, the Ravens defense struggled to set the edge. Kittle worked with the offensive tackles to seal the edge well and Juszczyk worked with pulling guards to kick out Ravens defensive ends and linebackers. Halftime adjustments made by Wink Martindale and his staff resulted in a significant improvement in the second half, but the Niners provided the rest of the league with an idea of how to attack the Ravens on the ground. 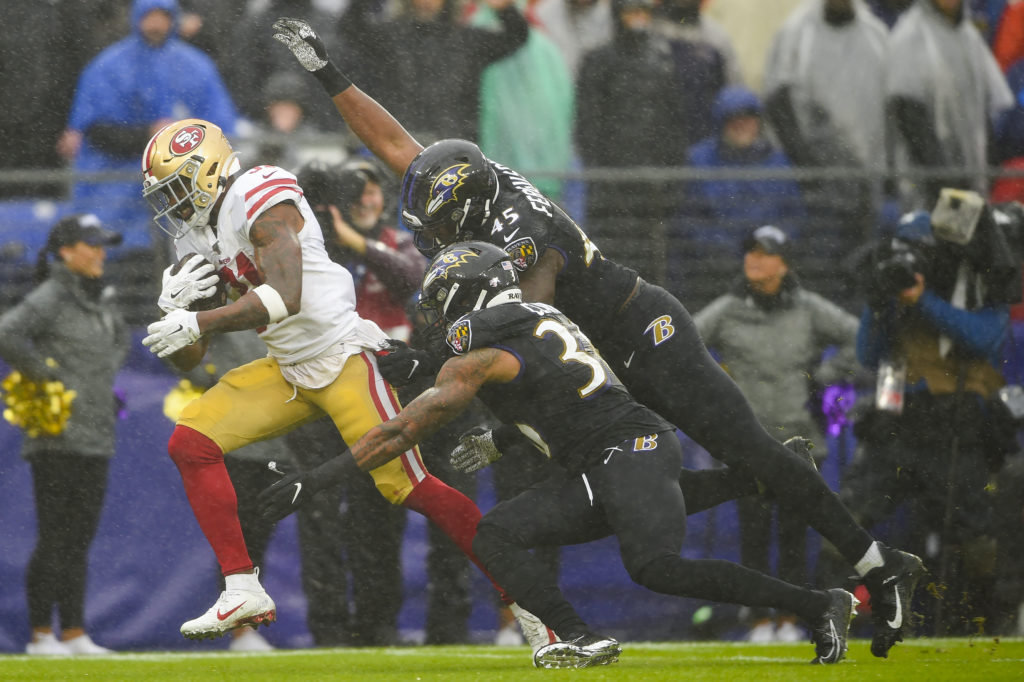 In Week 14, the Ravens are tasked with slowing the Bills fifth-ranked rushing attack. Not unlike the 49ers, the Bills employ one of the NFL’s highest paid FBs in Patrick DiMarco. While the Bills TEs aren’t even in the same universe as George Kittle, they are one of the better blocking duos in the league. Lee Smith is a 265-pound blocking specialist who averages less than ten catches a season over his career. 2019 third-round pick Dawson Knox tips the scales at 255 pounds and has already proven his ability as an NFL caliber blocking TE.

Running the ball for the Bills is future Hall of Fame RB Frank Gore and rookie third round pick Devin Singletary. Frank Gore is a powerful downhill runner who does most of the work between the tackles. Singletary, on the other hand, is a smaller change of pace back who prefers outside rushes. Against the Bills, the Ravens have to do a better job at setting the edge than they did against the 49ers. If Devin Singletary is allowed to get the edge and turn up field on his favored stretch play, Baltimore will give up 150 yards rushing to the Bills.

2) Get Physical with John Brown

Prior to the 2018-2019 season, the Baltimore Ravens signed John Brown to a one-year deal worth $5 million. Working with the big armed Joe Flacco to start the year, Brown found early success as the Ravens best deep threat. While the team thrived as a result of the switch to Lamar Jackson, Brown’s numbers dipped measurably. In the new Baltimore offense, Brown suffered from a lack of a vertical passing game and barely managed to tally 100 yards in the second half of the season.

Unhappy with his workload in the second half of the season and presented with a three-year contract offer from the Bills, John Brown decided to leave Baltimore via free agency. The choice to join the Bills has been a good one for Brown. He has been Josh Allen’s favorite target and leads his team in receptions, receiving yards and receiving TDs.

Just a year after playing for them, Brown now poses the biggest receiving threat to the Ravens on Sunday. While he’s been the Bills most successful WR so far this year, Brown is far from perfect and Baltimore’s defense has a handful of options for limiting him. Marlon Humphrey is playing at an All-Pro level and would likely be able to severely limit Brown’s production. But Humphrey may be asked to handle slippery slot WR Cole Beasley and might not be made responsible for Brown.

Whether it’s Humphrey or another CB, the Ravens should take care of Brown’s 178-pound frame and be physical with him at the line of scrimmage. By jamming Brown and preventing a clean release, the Ravens will tire him out and disrupt the timing of the Buffalo passing game. Being physical with John Brown may severely limit the Bills big play ability against the Ravens on Sunday.

As a draft prospect coming out of the University of Wyoming, Bills QB Josh Allen was known primarily for his absolute cannon of an arm. Now in the NFL, Allen may have the best arm in the league of any player not named Patrick Mahomes. Among Allen’s less talked about traits though, is his athleticism.

In three years at Wyoming, Allen was a proficient runner who totaled 767 rushing yards and 12 rushing TDs. At 6’5” and 237 pounds, Allen ran with a style that reminded many draft aficionados, including myself, of Cam Newton’s. 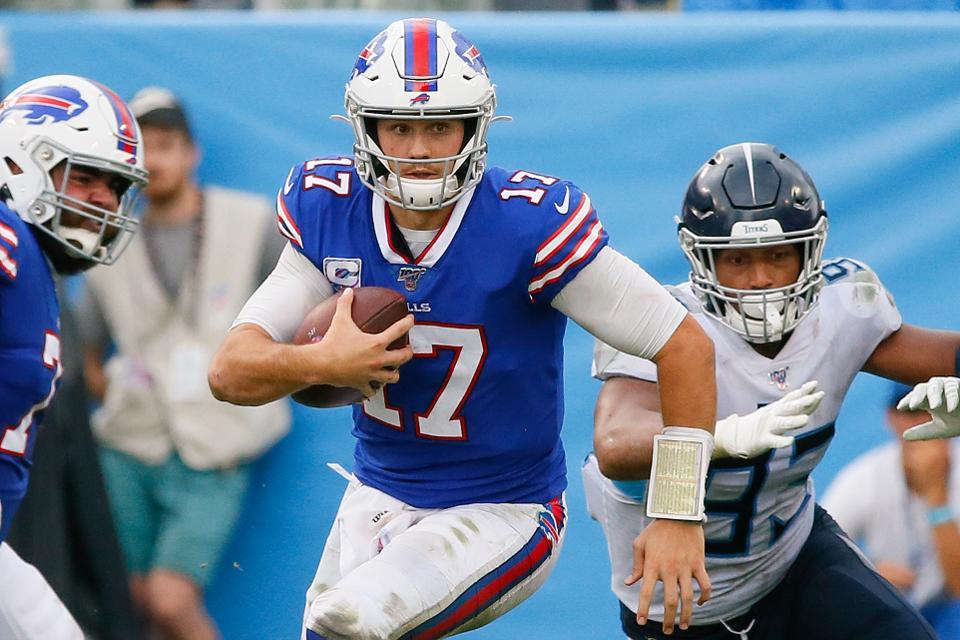 Besides Lamar Jackson, Allen runs the ball as well as any QB in the NFL. Allen is second in rush attempts, second in rush yards and first in rush touchdowns among QBs so far this season. Allen doesn’t possess anywhere near the speed or elusiveness that Lamar Jackson does, but he has plenty of speed and has the strength to break out of a lot of tackles. His talents as a runner notwithstanding, Allen is as good as anyone at shrugging off would be tacklers in the pocket and escaping to make a play. Remarkably, Allen leads the NFL in rush yards after contact. Whether Allen is in the pocket avoiding the sack or trying to use his legs to pick up a critical first down, the Ravens have to make it a priority to wrap him up and take him to the ground in Buffalo on Sunday.

While the Ravens have had tremendous offensive success so far this season, the vast majority of their production has come on the ground. Even when the Ravens have had success through the air, they’ve been heavily dependent upon their TEs. In part due to talent and in part due to scheme, the production from Ravens WRs just hasn’t been there. Against the 49ers in Week 13, Baltimore WRs combined for three catches for just 18 yards. As the Ravens progress towards the playoffs, getting a little more production from their WRs would build some confidence and help them prepare for the long run.

Buffalo CB Tre’Davious White is one of the best young CBs in football. The third year player out of LSU ranks second in the NFL in passes defensed and is tied for third in interceptions with four. According to NFL’s “Next Gen Stats”, White is tied with Stephon Gilmore for 4th in the league in catch rate allowed as the nearest defender so far in the 2019 season. When White is the closest defender to the football, opposing QBs are completing only 47.2% of their pass attempts. On Sunday against the Ravens, White is likely to match-up one on one with Hollywood Brown. If Brown can have some success against a CB of White’s caliber, he’ll help propel the Ravens to their 11th win and build confidence for the playoff run.