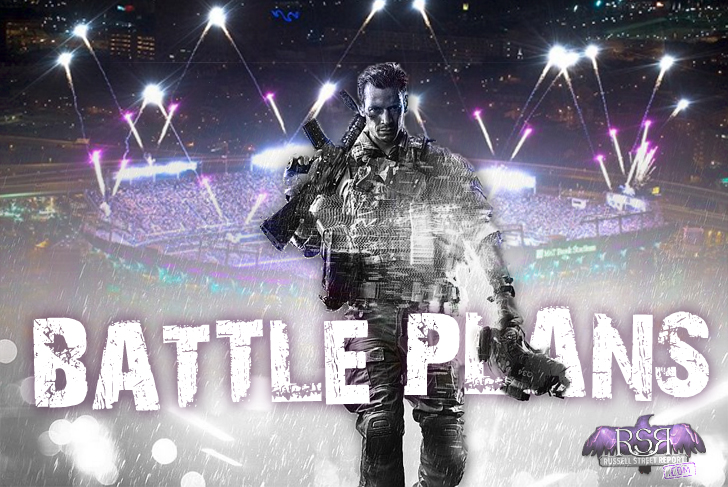 Get the Wide Receivers Involved

Through 14 weeks, the New York Jets have the 7th ranked defense in the NFL. With one of the worst offenses in the NFL and an average special teams group, it’s the Jets defense that has lead them to the five wins that they have this season. Oft maligned for his coaching style, sideline antics and media comments, defensive coordinator Gregg Williams deserves a ton of credit for his unit’s success. He has taken a roster dismantled by injuries and now full of no-name players and turned them into a Top 10 defense.

New York’s defense currently ranks second against the run and 18th against the pass. Jamal Adams (listed as Doutbful) is a budding superstar and Marcus Maye is a hugely underrated FS, but the Jets CBs are lacking. Nate Hairston, Arthur Maulet, Bless Austin, Darryl Roberts, Brian Poole and former Raven Maurice Canady are the corners currently on the 53-man roster. While the Ravens will undoubtedly play their game and run the football, it would be a good idea to attack the Jets through the air.

The Ravens can use a game like this one against the Jets to fine tune aspects of the passing attack that need work and develop more chemistry as the team prepares for the playoffs. The production from the tight ends has been incredible and the Ravens running backs have recently become more involved in the passing game, but the wideouts could use a little work. The Ravens wideouts have the lowest level of production of any receiver corps in the NFL and while drastic change should not be expected, getting them involved against the Jets can only help prepare them for high-pressure situations in January and February.

As of Wednesday afternoon’s injury report, Ravens starting LT Ronnie Stanley is listed as “doubtful” with a concussion. No official explanation has been made available and Stanley didn’t miss a snap against the Bills, but it is certainly possible that Stanley suffered a concussion and didn’t notice symptoms until after the game. If that is indeed that case, it would be difficult for Stanley to pass concussion protocol to play in a Thursday game.

Missing Stanley would be a major blow. The tackle out of Notre Dame has taken a massive step forward in his fourth professional season and a reasonable argument could be made that he has played as well as any left tackle in the NFL in 2019. If Stanley misses the game as expected, it is likely that James Hurst will be the Ravens LT against the Jets.

With Hurst inserted into the starting lineup for the first time this season, the Ravens would be wise to help him as much as possible. The Ravens typically bring extra blockers in the form of a fullback or tight end to the point of attack in the run game so no big changes should be expected in run blocking.

In the passing game though, the Ravens should be sure to give Hurst assistance whenever possible. Although the Jets don’t have any pass rushers that will strike fear into the heart of an offensive tackle, Hurst is sure to be rusty and a step slow in his first live action of the season. Some welcome help from Pat Ricard, Hayden Hurst or Nick Boyle is sure to make Hurst’s first start of the season much easier and help him keep Lamar Jackson off of the M&T Bank Stadium turf.

The Jets are a five-win team that is probably worse than what their record illustrates. The Ravens are an eleven-win team that is on a nine-game winning streak and is in pole position for the number one seed in the AFC half of the NFL playoffs. The Jets, who’ve already placed 16 players on Injured Reserve this season, are also in danger of missing a significant number of players due to injury. Among the players who may miss Thursday night’s contest are Jamal Adams, Quinnen Williams and two of only six CBs on the roster. The only team that can beat the Ravens on Thursday night is the Ravens.

The easiest way for the Ravens to beat themselves is by turning the ball over. Giving the ball away to the Jets and allowing them to stay in the game is something that Baltimore can’t allow to happen. The Jets have already proven, in their win against the Cowboys, that they are capable of playing up to the competition if they’re given the opportunity. If the Ravens are able to avoid turnovers and take the Jets out of the game early, they may be able to pull some players who could use the extra rest to recover from injury or from the wear and tear of playing two games in five days. Recovering from injuries and getting intermittent rest could be a big boost as the Ravens prepare for what they hope is a long playoff run. 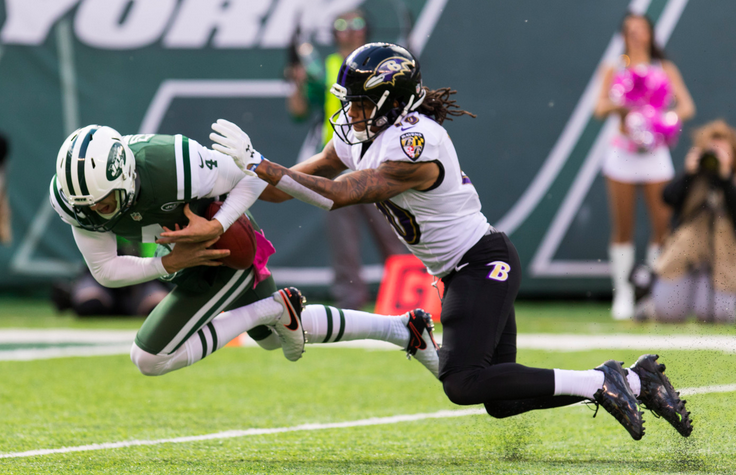 Where the Jets have had some success on the defense this season, they’ve been miserable on offense. To this point in the season, the team has the 30th-ranked passing offense and the 31st-ranked rushing offense. They have the 31st-ranked total offense and are scoring just 17.4 points per game. At home on a Thursday night and improving every week, the Ravens defense would have to play their absolute worst game of the 2019 season for the Jets’ offense to have any real chance of success.

While the Ravens shouldn’t be seriously challenged by the Jets’ abysmal offense, they can take a big step towards dominating by confusing and harassing Sam Darnold. Statistically, the former USC Trojan QB has taken a step forward in his 2nd year, but Darnold has had major ups and downs. After missing the early part of the season recovering from mononucleosis, Darnold made his return in a big upset victory over the Dallas Cowboys. On that day, Darnold completed 71.9% of his passes for 338 yards, two touchdowns and one interception. Unfortunately for Darnold, everything came crashing back down a week later against the Patriots. In a 33-0 to New England, Darnold completed just 34.4% of his passes for a measly 86 yards. In a night devoid of a Jets score, Darnold threw four interceptions and was made into a national story after he was caught on a microphone saying that he was “seeing ghosts.”

Baltimore’s defense is good enough to limit the Jets’ offense by playing base defense and basic coverage for an entire game. If the Ravens want a rout though, Wink Martindale should disguise coverages and blitzes throughout the course of the game. If the Ravens can keep Darnold confused and have him seeing ghosts once again, Baltimore’s defense has a real chance to get their first shutout of the year.

There is no defense in the NFL more familiar with Le’Veon Bell than the Ravens. The former Steeler made life extremely difficult for the Ravens during his first five seasons in the league. After a yearlong holdout designed to land a long-term, big-money contract, Bell signed a four-year, $52.5 million contract with the New York Jets with $35 million guaranteed.

While Bell may have gotten the deal that he wanted, he hasn’t had anywhere near the production to match. Despite being the league’s second-highest paid back, Bells ranks 25th in yards and 28th among backs in yards per carry. At least part of Bell’s struggles can be blamed on his supporting cast. The Jets offensive line has been decimated by injuries and are barely limping along. Darnold has been mistake-prone and the Jets’ inability to scare opponents with the threat of a passing game certainly doesn’t help Bell.

Against the Jets, the Ravens have to keep Bell contained. The stats illustrate how much he has struggled and he may not be the same player he was with the Steelers, but Bell is still a serious threat. He can get the edge and break off a long run or use his unique, patient running style to pick a hole inside to gain valuable yards. Bell is also still one of the best pass-catching running backs in the league. Through 14 games, he has been targeted 67 times and has grabbed 55 catches for 403 yards. Against the Jets, the primary focus of the Ravens defensive game plan should be limiting the damage that Bell does as a runner and as a receiver.

The Jets are in possession of the NFL’s 30th-ranked passing offense. With just 195.8 air yards per game through 14 weeks, they’re one of only four teams currently averaging under 200 yards per game. Sam Darnold and the offensive line are far from blameless, but the Jets receiving corps isn’t exactly made up of All Pro players. Slot receiver Jamison Crowder leads the team with 60 receptions and is followed closely by Bell, who has 55 catches on the year.

While Crowder and Bell lead the team in receptions, the Jets’ most dangerous game-breaking weapon in the passing game is Robby Anderson. Although he ran a 4.36 second 40-yard dash at his pro day during the pre-draft process, the Temple wideout went undrafted. Now in his fourth year with the Jets, Anderson leads the team’s receivers in both yards per catch (15.4) and touchdowns (4). The Jets are simply not going to dink and dunk their way to a victory against the Ravens. If they have any chance at pulling off a massive upset in Baltimore, it’ll be as a result of big plays. In the Jets’ upset win over the Cowboys, Anderson beat the corner with a hesitation move, beat the Free Safety to the ball, and outran the defense for a 92-yard touchdown. A long touchdown like that is exactly the sort of play that the Ravens have to avoid on Thursday Night Football.

Having Marlon Humphrey follow Anderson to shut him down and take away the Jets’ best big play threat will really hamper an already poor offense.

The Jets offensive line has been an absolute mess in 2019. Offensive linemen Ryan Kalil, Brent Qvale and Brian Winters all made the Jets’ initial 53-man roster before landing on the injured reserve at different points in the season. Former Raven Kelechi Osemele started the first three games of the season before getting hurt, having surgery and ending up at the center of some dramatic controversy concerning the handling of his injury. The remaining players have dealt with various injuries of their own and have been shuffled around in an attempt to fill in for inactive players and find the best mix. Proof of the Jets’ offensive line dysfunction is illustrated by the fact that the unit ranks 28th in the NFL in sacks allowed with 3.6 per game.

Jets tackle Brandon Shell has been one of the only stalwarts along the offensive line. The 2016 sixth-round pick became the Jets starting right tackle in 2017 and has been the starter at that position since. On Thursday night, Shell will have the unenviable task of blocking Ravens outside linebacker Matthew Judon. Drafted just 12 picks ahead of Shell in the 2016 draft, Judon has been phenomenal over his last few games. Judon’s improvement comes at a time when he’s looking to put as much on film as possible ahead of free agency and contract negotiations this offseason. Shell is in for a long night and if he can’t hold his own against Judon, Sam Darnold and the rest of the Jets will be too.