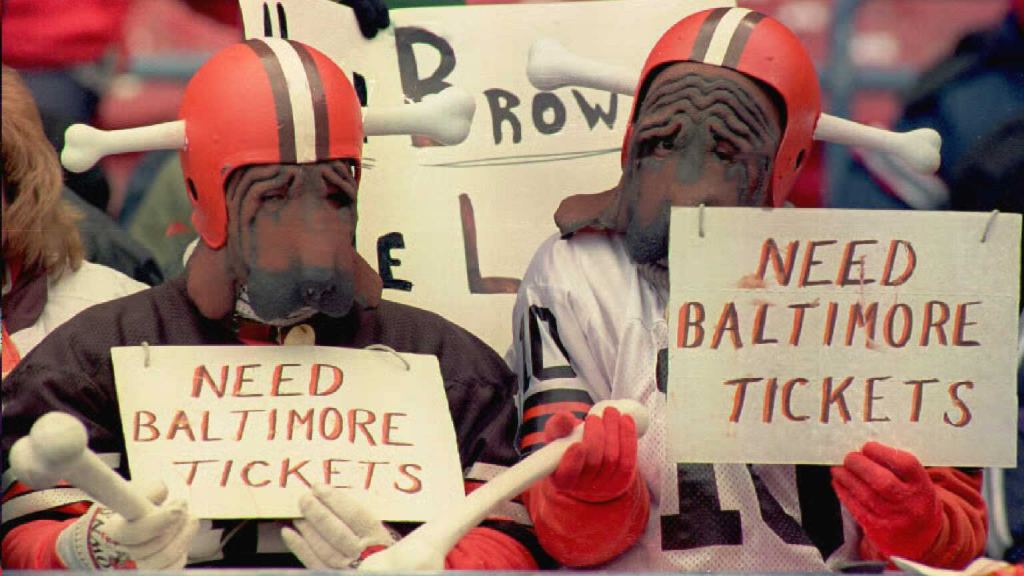 It was early November 1995 and I was about to board a flight home from a business trip to Florida. Before boarding the plane, I checked my voice mail. There was a message from a friend.

“Did you hear that the Browns are moving to Baltimore?”

At first I thought the message was a joke. But I knew my friend Dan Novak very well, and it wasn’t his style to pull such a prank. So, I listened again, paying close attention to the message’s tenor.

This was NOT a joke!

Shock settled in and I somehow took my seat on the plane in robotic fashion. Staring out the window, I noticed the guys loading bags on the plane. Ironically they were wearing Browns colors.

My joy was tempered. I felt the need to process this stunning development. The scars of the Colts exodus still lingered and I wondered how Baltimore could do the same thing to Cleveland that Indianapolis did to us.

Eventually I rationalized the theft.

Baltimore tried to acquire a new team the right way, through the expansion process and after years of invested sweat equity from local government officials and the Maryland Stadium Authority, they and our hopeful city were told to use the money raised to build a museum.

For all intents and purposes, Tagliabue, with his flippant museum comment, had flashed us all that infamous digit. Now it was our turn. We didn’t make the rules. The NFL did. And as dirty as the rules were, Baltimore played ball and eventually stole a possession from Cleveland.

“Don’t blame us”, I thought. “Blame Tagliabue and the greedy owners. They made their bed. Now sleep in it!” 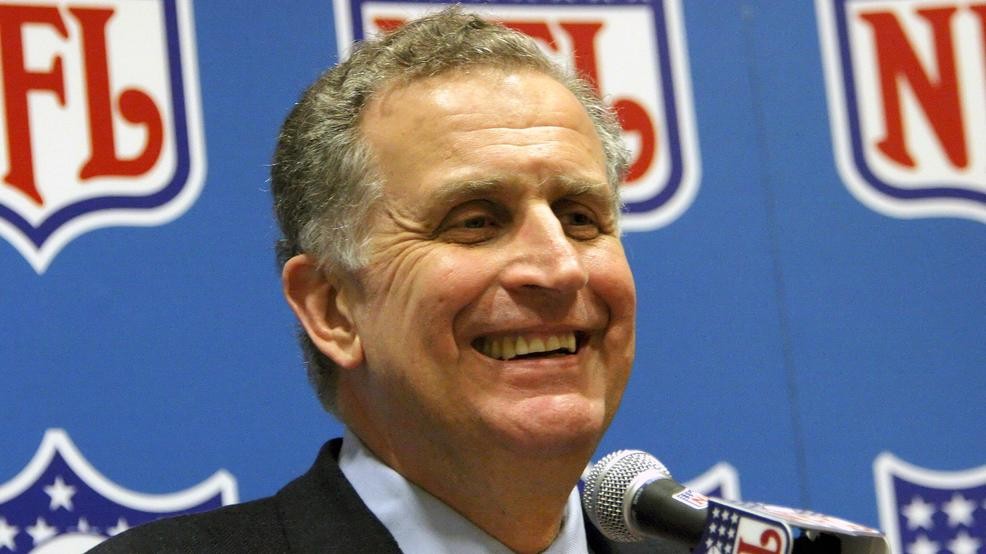 As the plane took off and the coast of Florida followed to my left, my thoughts began to veer in a new direction. Would we keep the name “Browns”? How long would the team play at Memorial Stadium? What seats will we get for the money deposited?

I was all about moving forward and didn’t spend time worrying about the collateral damage that included heartbroken fans in Cleveland. I was anesthetized by the seemingly crooked process. All is fair in love, war and acquiring an NFL franchise.

The vitriol from Cleveland, directed towards the newly named team, the Ravens, Baltimore and owner Art Modell, was immense. I understood it. We’ve seen this before as the deliverers of such emotion aimed at Indianapolis. It didn’t bother the fans of Baltimore much, particularly after the whining municipality of Cleveland retained their team name, colors and had a stadium and new team to boot, just three years later.

Many seasons passed since Modell’s evacuation from the shores of Lake Erie – nearly 16 to be exact by the 2012 season. The Ravens had one Super Bowl title to their credit and they were knocking on the door of their fifth consecutive playoff appearance under John Harbaugh. A few weeks into what would be the Ravens second Super Bowl season, NFL Network released another edition of A Football Life.

I expected the episode to be a one-hour bellyaching session that would include interviews with teary-eyed Browns fans along with former Cleveland Mayor Michael White. I also anticipated commentary from outspoken opponents of the Browns’ move from grandstanders like Bob Costas and Bob Trumpy.

But Cleveland 95 included none of that.

Instead, Cleveland 95 was a deep dive into the collapse of the Browns marked by the decay of Municipal Stadium, the financial struggles of Art Modell and the emotional upheaval within the ranks of the team’s players and coaching staff stemming from the news of the move.

The 1995 Browns were a team expected to compete. On the heels of an (11-5) 1994, Cleveland 95 was a team that many believed would make a deep run in the playoffs and perhaps deliver the first Lombardi Trophy to Cleveland. But 8 games into the 1995 campaign, the news about the move hit and it sunk the Browns and their fans. Hopes were dashed.

But this A Football Life episode, was not at all what I expected. It was about people – not just the fans, but really everyone affected by this historical move. Having had a team stolen in the dead of night, Baltimore fans felt little empathy for the people of Cleveland and the members of the team’s organization. Driven by our own collective needs for restitution, revenge and requital, we turned a blind eye towards the emotions felt by the fans of Forest City.

I was unsympathetic, uncaring, insensitive and every synonym in between.

The behaviors since, of the loud and obnoxious Browns fans – a vocal minority I believe, helped to anchor my callousness toward Cleveland. I remembered the bottles thrown by Browns fans onto the field at referees and the story of drunken fans tackling a visiting 8-year-old Jets fan wearing his colors. I see the Tweets and the angst on social media practically every day. I’ve been on the receiving end of it. 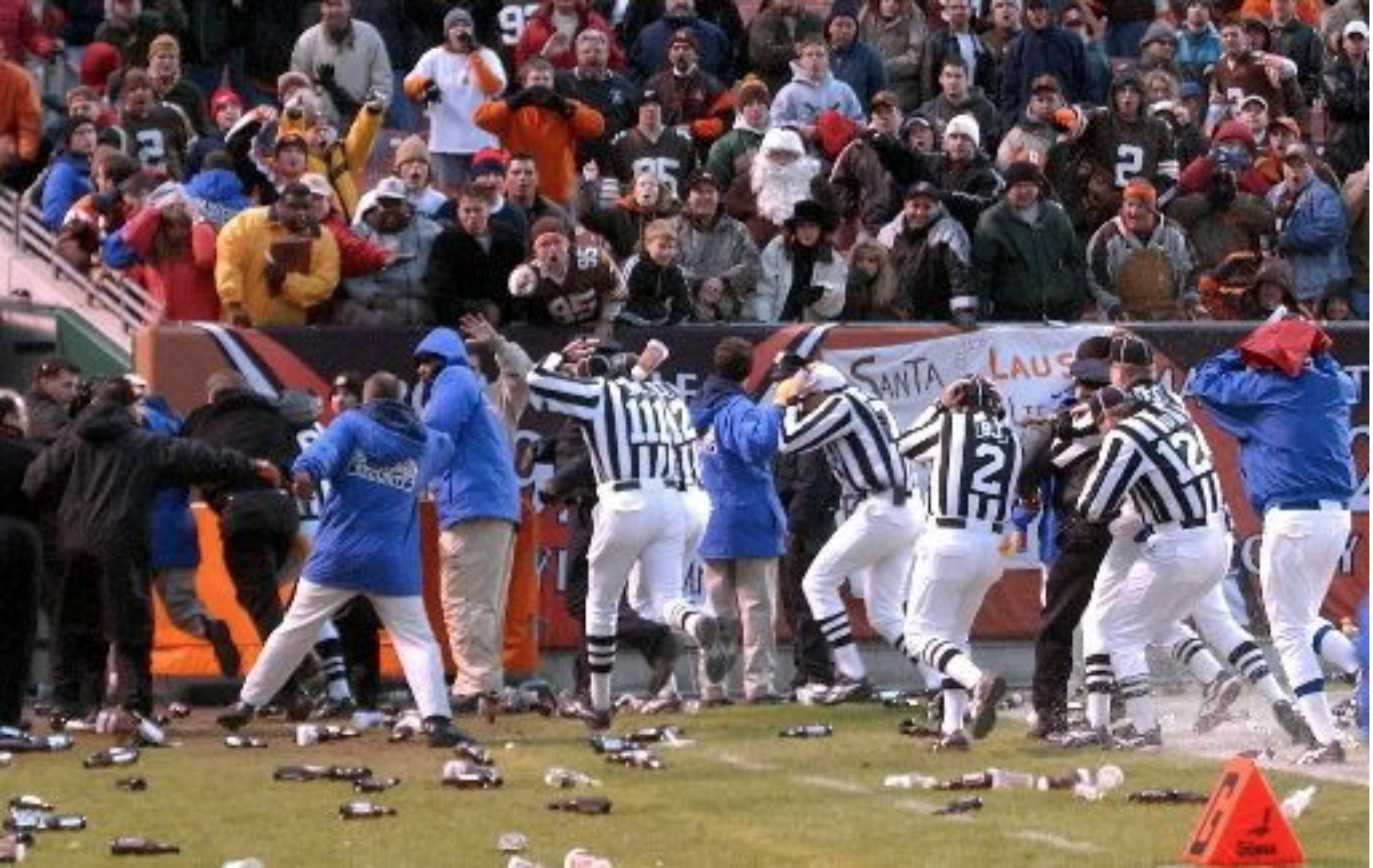 But then recently, Cleveland 95 turned up again on NFL Network. And almost like The Grinch Who Stole Christmas, I started to warm to the idea that there were real emotional and financial losses suffered by the citizens of Cleveland, many of them good people – very good people, like each of us are, or at least aspire to be here in Charm City.

In our collective desire to compete, to win, to elevate our own civic pride, we happily kicked those same ambitions of Clevelanders to the curb. And their disdain towards Baltimore continues and deepens with each losing season. Their hatred runs so deep and pure that it taints their objectivity. We wonder why. What’s so different about their loss of the Browns and Baltimore’s loss of the Colts? I wanted to know.

Because he appeared in NFL Network’s Cleveland 95 and was deeply involved in the Browns move to Baltimore, I called Kevin Byrne, Executive Vice President – Public & Community Relations for the Ravens and a native of Cleveland, to get his take on the venom directed at Baltimore. To start the conversation, Kevin first shed a little light on the moment he first heard the news of the move.

“Art [Modell] brought me back into his office in Cleveland and said that he was going to move the team. And then he told me, ‘I’m hoping you will join us but I’ll tell you up front we won’t be the Browns. I can’t take the name and the colors because that belongs to the fans. They own Jim Brown and Ozzie and Brian Sipe.’ So that was the very first conversation.

“I understood what Art’s mindset was. And he understood that Cleveland wouldn’t be without a franchise for long because he had been talking to the commissioner. So that’s the start of it.”

I wondered how it affected those who did make the move. Kevin explained.

“Personally, it was difficult – a difficult decision. My family is based in Cleveland. My best friends in high school are there and for that, some have probably never forgiven me or they look at me in a different light because I chose Art Modell.

“But there were bigger issues in the area at the time and in the end just such disappointment for the Browns because the Indians got a new stadium, the Cavs who had a nice arena were brought downtown to a new arena and the Browns were told, ‘sorry, there’s no money left.’”

To protect his investment and stop the financial hemorrhaging, Modell made the move to Baltimore. 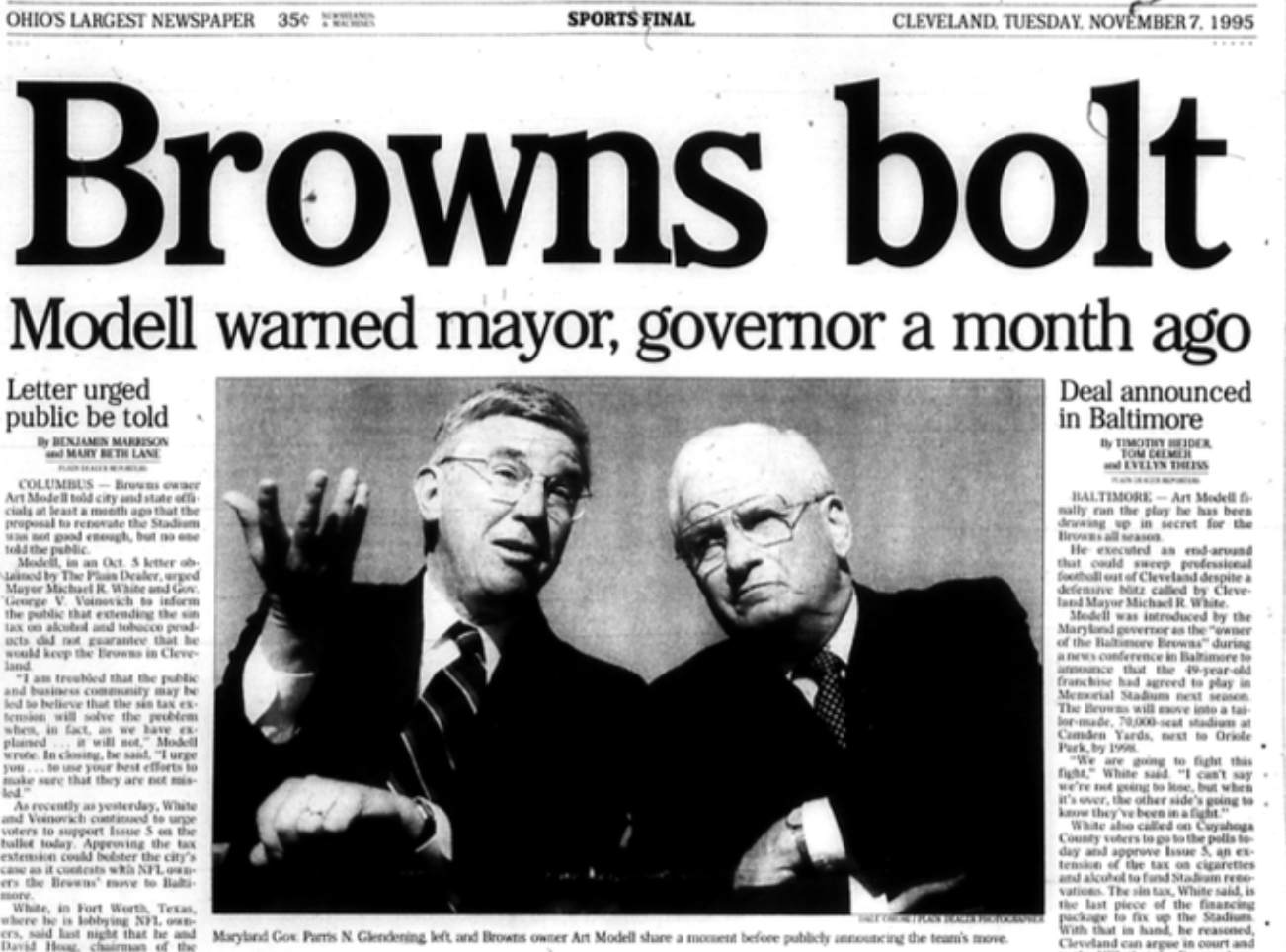 Photo taken of the November 7, 1995 edition of The Cleveland Plain Dealer

It’s difficult to walk in the shoes of fans in other cities – to see things through their eyes. We can only see things through our own eyes. And as such we lean on what we think are similar experiences to try and understand. Through Baltimore’s eyes, Cleveland had only 3 years without NFL football while Baltimore suffered through 12 empty seasons. We lost our name, colors and the Colts Heritage. Cleveland kept all of those treasured components of their legacy.

But as Baltimoreans, what we’ve overlooked – what I’ve overlooked, is that the city of Cleveland was filled with hope during that ’95 season. They expected to compete for the title and the Browns played before sellout crowds. Conversely, the Colts were in a state of hopelessness. By the close of the 1983 season they had registered six consecutive losing seasons, the last three of which tallied a combined record of 9-31-1. The final game at Memorial Stadium on December 18, 1983 drew just 20,418.

When the Colts left in the middle of the night on that snowy March eve it was a quick death, yet not an unexpected one. Cleveland’s football death was a slow, unexpected one. In the end, players and fans cried together. Both were innocent victims. And the culprit, through the eyes of Clevelanders, was Modell.

“There was a part of me that felt that Art got the short-end in Cleveland”, explained Byrne. “And I hoped that I could help in some small way to tell the story of how it really happened. And I think I’ve failed in that over the years. If I was able to tell that story better, [Art] would be in the Hall of Fame today.”

Instead, a media caught off guard, vilified Modell.

Many fans here in Baltimore have gotten over the loss of the Colts. But they’ve been gone now for 36 seasons. Consequently, some of the younger fans feel no loss at all. Nevertheless, since the NFL returned to Baltimore, the Ravens have appeared in 24 playoff games, winning 15 of them, two of which were Super Bowls. Cleveland during this time has played in only one playoff game, a loss, and 19 of their 21 seasons since returning to the league have been losing ones.

It only adds to the anti-Baltimore disdain in Cleveland.

‘I still have a couple of cousins [back in Cleveland] who won’t speak to me”, said Byrne. “They didn’t spend a lot of time asking me questions about why I moved either.” 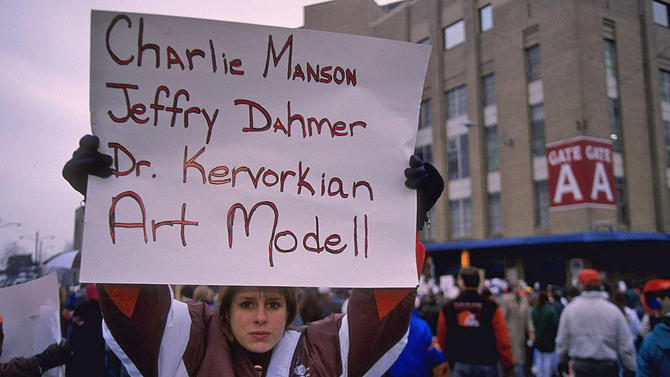 Will the bitter sentiment ever subside? According to Byrne it will end – conditionally.

“In the end, all have lived happily ever after. Baltimore got a franchise that has won and won at the highest level. Cleveland got its team back in a relatively quick time. They haven’t had as much success on the field but they will. It will eventually work out for them. That collection of talent they have right now is pretty good.

“When they win a championship that means they are better than Baltimore.”

Thanks to Kevin and Cleveland 95, I appreciate the plight of a Browns fan more. But that said, dating back to that November day in 1995 when I learned of the Browns move, and every day since, I have never wanted Cleveland to be better than Baltimore.

And I never will.

I’ll happily get used to Clevelanders being perpetually pissed off.