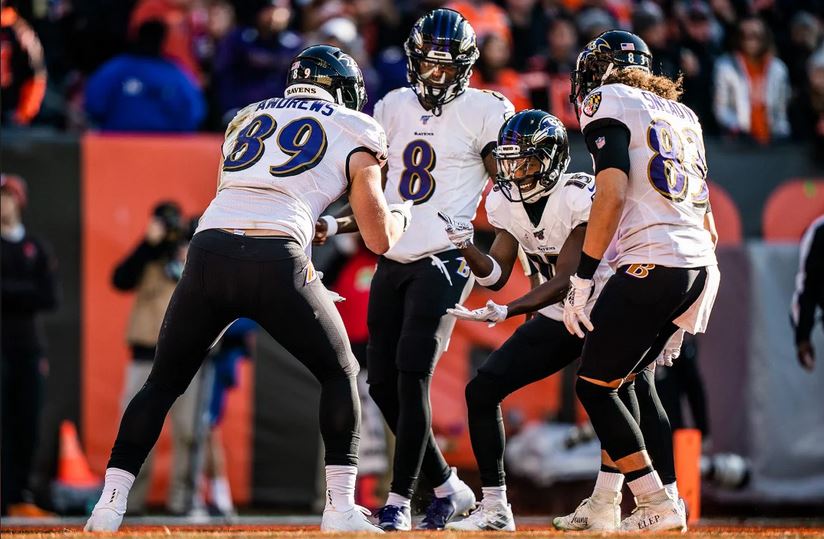 The Ravens got payback for the Week 4 thumping they took from the Cleveland Browns and routed the Brownies 31-15. Let’s break it down.

The Ravens offense came out of the gate flat with a turnover on downs, a fumble, and two punts starting things off. However, two quick strikes in the last two minutes of the 2nd quarter got them right back on track.

The offense ended up with 481 yards and 31 first downs on 71 plays and 31 points. So, I guess we’ll forgive them for the slow start.

Lamar Jackson continues to prove that he is trap-game proof and he solidified himself as the no-doubt-about-it Most Valuable Players of the National Football League. The Browns defense did well for 28 minutes in the first half, but then Greg Roman dialed up some deep shots and Lamar fed Mark Andrews for two scores to take a 14-6 lead into the half.

The fumble isn’t what you want to see, but both Jackson and Mark Ingram knew it was a bad handoff right when it happened. More importantly, Lamar rebounded and finished the day with 103 yards on the ground and 238 through the air. Add in three TD passes (making 36 on the year) and I guess it can be concluded that the Ravens offense hasn’t been “figured out.” This season has been a joy to watch Lamar Jackson.

When you take a step back and think about this season, I'm just so grateful for the ride. @Lj_era8 has brought so much energy to the fan base and it was truly needed.

The running back group as a whole was key to grabbing this victory. My vision of the three-headed monster came to fruition as Ingram, Gus Edwards and Justice Hill all made contributions. Hill, in particular, looked really solid. It seems he has refined his footwork and is taking fewer big strides, which allows him to make more seamless cuts. He added a couple of catches to go with an 18-yard rushing TD.

With the news that Mark Ingram has a calf injury, it does raise some concerns, but Ingram has three weeks to rest up and with Edwards and Hill heating up, the Ravens should be able to manage reps, if needed (Note – this was written before we had a full injury report/MRI on Ingram).

The focus of the passing attack was the running backs and tight ends, once again. The one guy that did stand out was Seth Roberts as he collected two crucial first downs.

Shout out to Seth Roberts. Guy has played some great football down the stretch. Not eye popping stats but big plays at big times. #RavensFlock

The underuse of Marquise Brown was a little disappointing, but the Ravens passing attack exploited the middle of the field where Mack Wilson and T.J. Carrie struggled with the TE and RB group. I personally think the approach should be to exploit the weaknesses in the defense, regardless of what position you’re targeting. As long as you’re moving the ball, you’re good.

Mark Andrews has gone on an absolute tear since the bye week. In eight games since the bye, Andrews has seven TD including two multi-TD games. He’s Jackson’s top target and he has solidified himself as a top-five tight end in the league and has made a case for the top-three conversation behind Travis Kelce and George Kittle.

I gave the grade a bump, as I was really impressed with the blocking from all three of the TEs. Nick Boyle was an absolute animal once again and added a few catches, which is just gravy.

In addition to the blocking from the TE group, the offensive line did a very good job in that department. Bradley Bozeman’s execution of pull blocks when the Ravens run powers to the right has been really impressive. Pass protection was excellent as well. The Browns didn’t take Jackson down for a sack and only came away with four QB hits, one of which resulted in a flag for Sheldon Richardson for roughing the passer.

This group has jelled throughout the year and Patrick Mekari is playing well in relief of Matt Skura. It was thought to be a weakness going into the year, but the OL group has proved everyone wrong. 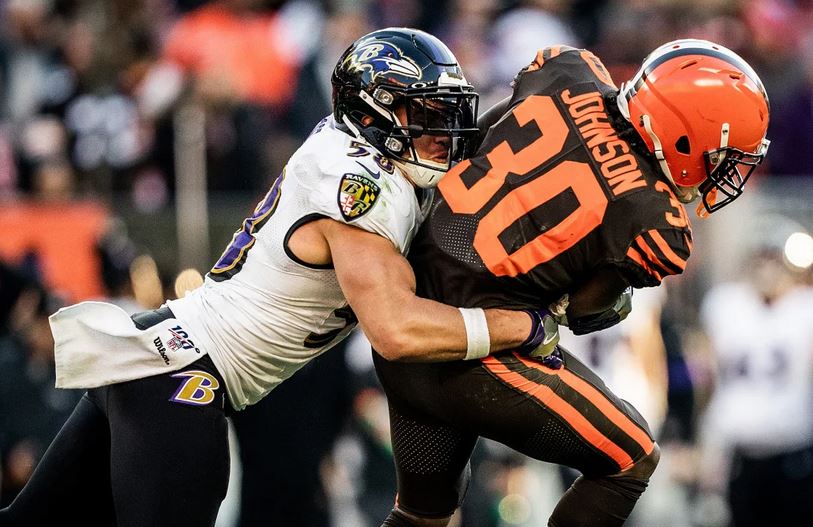 Much like the offense, the defense had a bit of a rough start, but settled in well. The Browns were held to just 241 yards, 17 first downs and 15 points.

My biggest concern coming into this game was the running of Nick Chubb and Kareem Hunt. Well, those concerns were put to rest early in the game as Chubb was bottled up all day and Hunt struggled to get anything going (thank god I didn’t start him in fantasy).

The pass rush was a concern and caused me to drop the grade down, but the key to the Browns offense in recent weeks has been their running attack. Chris Wormley, Brandon Williams, Jaylon Ferguson and Michael Pierce made sure that didn’t happen, as they all registered tackles for a loss, in addition to multiple tackles.

Matthew Judon and Tyus Bowser played very solid games and L.J. Fort really stood out in pass coverage, registering an interception that was called back and an almost-interception that just hit the ground and was overturned.

The defense backs gave up a few chunk yard plays and it seemed like they were playing a little loose in coverage, but nonetheless, they did enough to stop Baker Mayfield from getting traction.

The biggest concern was the penalties that led to the first Cleveland touchdown. That drive went for 45 yards, but it should be noted that penalties on 4th and 2 (Marcus Peters holding call) and 3rd and 6 (Jimmy Smith defensive pass interference) kept them going.

I took a bit off the grade because of that, but felt overall they played well. Given the lack of a pass rush, they were asked to hold up on the back end for longer periods of time, so with that factored in, it’s hard to be too upset when the opposing QB only throws for 60.6% and 192 yards.

Not much to see here, and after the disaster showing last week, that’s exactly what you want. Justin Tucker was perfect, and Sam Koch had two beautiful punts. The only thing I didn’t like was that hard hit De’Anthony Thomas took on a kick return. He read the lane very poorly and I’m just glad he’s okay – and that he held onto the ball. 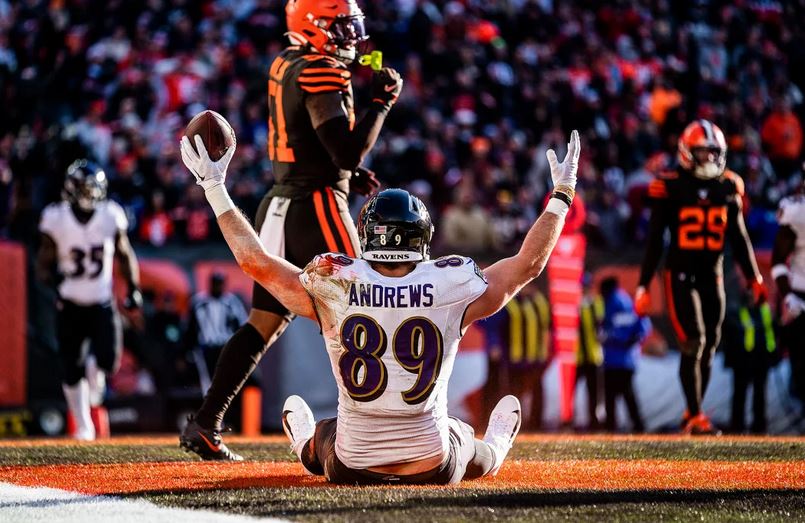 Mark Andrews gets the game ball in the crucial matchup the clinches the #1 seed for the Baltimore Ravens. If you’ve been reading week-to-week, please note, I stopped giving it to Lamar Jackson every week because it got a little boring. We all know he’s our MVP and continues to be the man week-to-week.