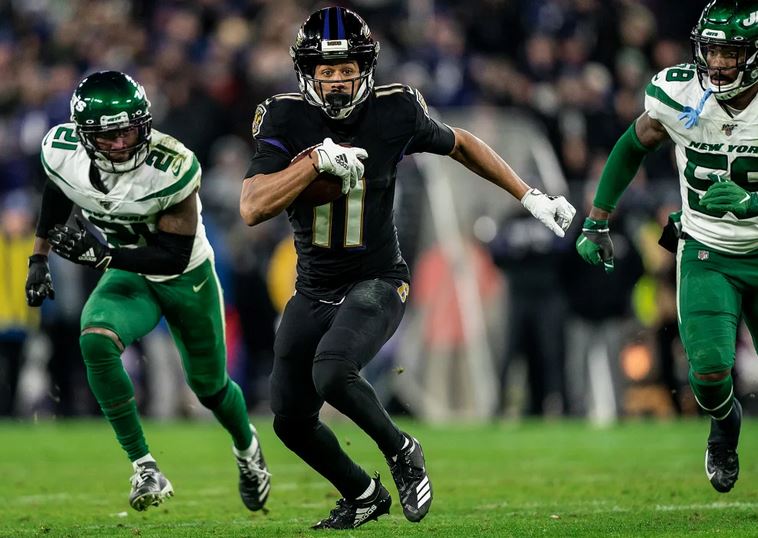 If there’s any area of the Baltimore Ravens offense that needs to be opened up more, it’s the wide receiver part of the passing game. Thus far, with the regular season all but completed, the only notable contributor has been rookie Marquise “Hollywood” Brown. While 44 catches, 569 yards and 7 touchdowns (tying the Ravens rookie record) is nothing to scoff at for a first-year target (especially in Baltimore), I’ve still gathered the sense that getting him the ball is more of a struggle than it should be. That’s been the case for the entire receiver corps, for the most part.

While that’s somewhat concerning (obviously less so given the success this top-flight offensive unit has seen), I would like to make the case that another outside target has been a success in 2019: Seth Roberts.

One of the early acquisitions made by Eric DeCosta this past offseason, Roberts was primarily attractive to the Ravens for his ability to block. That’s certainly been on display this season, with the outside blocking provided by Roberts and others being an overlooked reason for this rushing attack’s success. Think about all the times that Lamar Jackson takes off and makes a juke outside to pick up a first down. For that to happen, the receivers need to be taking their respective cornerbacks out of the play. So, with that in mind, you could immediately say that Roberts has been successful in what he was brought in to do.

At the same time, Roberts plays the receiver position, and another important aspect of his player profile is his contribution in the passing game. In this area, I thought he’d be a nice addition, especially given the fact that he had been a consistent member of the Raiders’ offense for the last four seasons. Keeping a close eye on him in the first half of the season, though, I was somewhat disappointed with his production. Over the first eight games, Roberts saw consistent snaps but only caught 10 balls for 115 yards and no scores.

Luckily, as the season reaches its final quarter, I’ve found his role has expanded and Jackson’s trust in him as a go-to target has increased.

In the last two games against the Jets and Browns, Roberts has caught five passes for 89 yards and a score – compared to the rest of his season, that’s a drastic improvement. What’s even more impressive is that over those same two games, the rest of Baltimore’s receivers have accumulated eight catches for 79 yards and two scores, with the vast majority of those stats going to Brown (four receptions for 45 yards and a TD) against New York. In recent games, Roberts has been the Ravens’ most consistent target by a decent margin.

If you need any more convincing of how important Roberts really is to Jackson’s success as a passer, think back on the struggles of receivers Joe Flacco had to throw to. If there’s one consistent thing that sticks out, it should be drops. So far this season, according to Pro Football Reference, Roberts has none.

In an offense that elects not to utilize its receivers as much as others would, explosiveness is nice, but less necessary. Rather, receivers must be reliable when called upon, which can be difficult when they’re so rarely thrown to.

Luckily, in Seth Roberts, Jackson knows he has a wideout that will catch balls that are put on the money, and I believe that’s why we’ve seen his targets and production increase in recent weeks.

With the playoffs looming, here’s to those numbers continuing to rise.