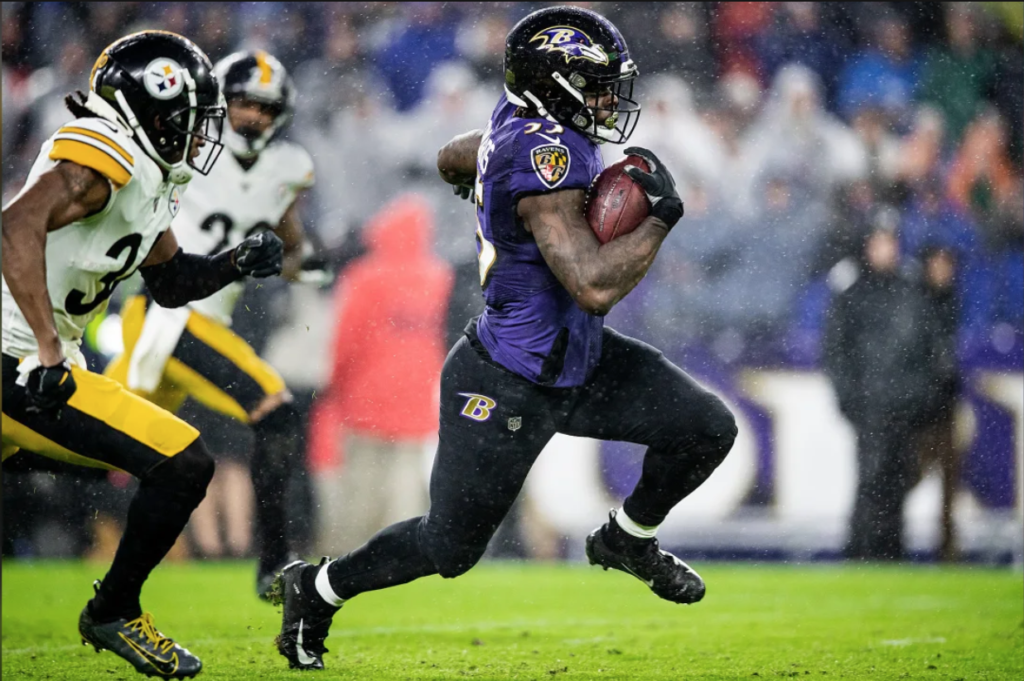 The Ravens reserves played extremely well against the Steelers and the experience will go a long way for players like Anthony Averett, Ben Powers and Jaleel Scott. But for me, the proof in the pudding that the team stepped up in a huge game for Pittsburgh, lies in this single statistic – 223 yards rushing against a physical and desperate Steelers defense hellbent on stopping the run while playing without the services of Ronnie Stanley, Marshal Yanda, Mark Andrews and Mark Ingram, all Pro Bowlers, was pretty amazing. Let that sink in.

Give John Harbaugh and his staff a ton of credit for managing the game perfectly. The reserves got plenty of reps while many key starters rested on their way to setting NFL records, team records and securing their arch-rival’s position on the couch for the postseason. They still allowed the competitive juices to flow in order to keep their edge. And most importantly. the Ravens emerged from the game relatively unscathed from an injury perspective.

That is OUTSTANDING coaching and should not be taken for granted.

I’ve written it before and I’ll write it again – there’s something special happening here. And what it is has become clearer and clearer with each passing win, twelve in a row to be exact. Make it fifteen in a row and the Ravens will secure their third Lombardi in just 24 seasons.

“The revolution is here.” pic.twitter.com/absMbLDjz9

Eye on The Prize

The Ravens set a couple of NFL records against the Steelers as well as a best overall team record of 14-2. Impressive feats for sure but to a man, these accomplishments are viewed for now, as just rungs in the ladder to the pinnacle of the NFL – a trip to Miami in February to participate in Super Bowl 54.

Yesterday when the game had been decided, the players considered bathing John Harbaugh in Gatorade. But it didn’t happen. Harbaugh explained why.

“Marcus Peters called it off, I came to find out. Yes, Marcus called it off. He said, ‘This is not the time for that. We have more to do.’ I kind of appreciated that. I’m dry for that reason, so, it was nice. I don’t think I’ve ever gotten a Gatorade shower.”

Speaking of Peters, the Ravens were able to retain the Pro Bowl corner before he hit the free agent market, inking the demonstrative CB to a three-year extension for $42M. The deal is a win-win and that is a common thread of the contracts completed by Eric DeCosta since he was given the title of GM.

Oftentimes, the way to achieve such fairness in negotiations is to be proactive. DeCosta was that way with Patrick Ricard, L.J. Fort and now Marcus Peters. By acting now, the Ravens prevent a key defensive component from entering free agency in March and we’ve seen what that has done in the past when UFA’s like Za’Darius Smith and C.J. Mosley hit a market flush with excess cap dollars.

The move now shifts a little leverage towards the Ravens in their negotiations with Matt Judon.

Back to the Steelers for a moment, it’s challenging for both players and fans alike not to get caught up in the emotion of a rivalry game. No one wants to lose it even if there’s nothing to gain by going all in. Perhaps the Ravens would have cruised through the game a bit more if the game was against the Jaguars or a team with nothing to play for.

Clearly the Steelers played aggressively and brought their typical swag. They even crossed the line a few times with some late hits which may have been why RGIII celebrated a first down so vociferously. Maybe it’s why Justin Tucker celebrated his fourth field goal like he just downed his third shot of Patron.

But how sweet is it when the Ravens can still manage to beat a tough team that was all-in for the win and surviving by a thread, without 6 of their Pro Bowlers on the field?

For those concerned about the #Ravens losing momentum with next week off, consider this:

* Those games have been won by an average of 11.9 points. 14 wins were by 7 points or less. pic.twitter.com/EpDiix1PIy

*Ravens have a bye next week… pic.twitter.com/88PiKVX1Xk

Coach of the Year

John Harbaugh has done a terrific job all season. From galvanizing the team to overcoming adversity to enabling a completely new and record-setting offense to the No. 1 seed in the AFC and the best overall record, it has been an unforgettable campaign for the Ravens skipper. That said, he may not be the NFL’s best this season. Others like Kyle Shanahan, Sean Payton and Mike Tomlin have done outstanding jobs. But Harbs clearly should be in the conversation, unless your name is Trey Wingo.

List of coaches who should be considered for coach of the year:

I’d give it to Payton based on him winning 5 games with a back up QB.

Major props to the fans who withstood wretched conditions to cheer their team on to a 14-2 regular season record, including the always reliable Real Fan Dan!

Chris Adamski from the Pittsburgh Tribune, tweeted out that Steelers edge defender Bud Dupree was upset that the Ravens “on purpose” kept putting the Titans at Texans on the big scoreboard. Hey Bud, that’s what big scoreboards are for. Enjoy your vacation…Freddie Kitchens is gone – no longer will he be seen on a Browns’ sideline and that’s a shame for the rest of the AFC North. Baker Mayfield is now 2-for-2 in head coach firings. Who will be his next victim? Who will want the job given the Browns collection of dysfunctional underachievers? The Browns will be looking to hire their 9th head coach since 2000.

Here’s Baker exhibiting more of his career-long petulant behavior with a Bengals fan. Notice his teammates that don’t even acknowledge Mayfield’s childishness. Maybe they’re sick of his act too. No wonder they lost to a 1-14 team. (Note: Be sure to check out the comments in the Tweet below)

Baker: “Why don’t you come down here and tell me that to my face?”

Fan: “We’re not allowed to, you know that!” 😂 pic.twitter.com/ZxUZlwrE6a

The Ravens and their fans can relax and enjoy the games during Wild Card weekend as we all await the Divisional Game on January 11 at 8:15 PM. My early predictions:

See you in September Baker. Stay out of trouble, if you can.