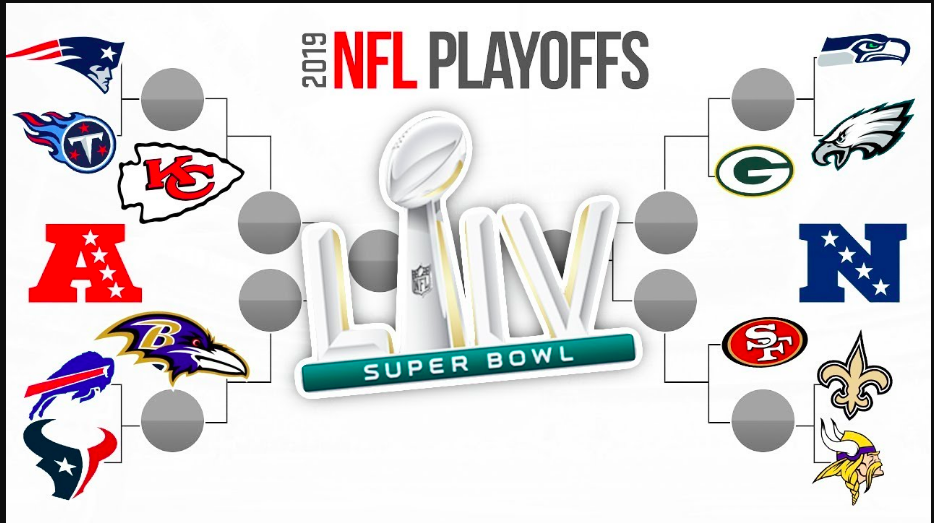 It’s Wild Card weekend in the NFL, and the Ravens are resting up for the divisional round. We Ravens fans can sit back, relax, and see which squad will be coming to M&T Bank Stadium next Saturday. What will we see? RSR predict the action here…

How great is it to be able to sit back and watch possible Ravens divisional opponents beat up on each other this weekend? This is among the benefits of having the No. 1 seed. And here’s a little nugget for you: home teams have won 31 of the last 40 divisional games played, by an average of nearly 12 points. But until then, let’s take a look at this weekend’s action.

I don’t trust the Texans. When they needed to win they were spanked by the then (4-8) Broncos, 38-24. Two weeks later they just got by the Tampa Bay Bucs 23-20, despite five Tampa turnovers. On the other hand, the Bills average less than 20 points per game and haven’t scored more than 17 since they beat the Cowboys on Thanksgiving by the score of 26-15. The Texans get an emotional lift from J.J. Watt who returns and uses brother T.J.’s ball-punching move to force a big fumble by Josh Allen.

I’ve heard all the talk about how Bill Belichick is very familiar with Ryan Tannehill and how he’ll key in on Derrick Henry and make the Titans beat the Pats’ D in a different way. But the Patriots just look tired, slow and old these days and I don’t think they have the juice to stop a hot Titans team. Get ready for your next playoff opponent, Baltimore.

The Saints offense is clicking on all cylinders and the Vikings offensive engine needs a tune up. Kirk Cousins doesn’t step up in big games and this one will be no exception. Drew Brees throws for 350 yards and four scores, nearly half of those totals going to Michael Thomas.

These two teams clashed in Philadelphia back in Week 12, won by the visitors, 17-9. It was an ugly affair that featured seven turnovers, five from the hosts. Adding to the ugliness, Seattle had 12 penalties for 90 yards. Then the Seahawks were favored by one. This time around Seattle is a 1.5-point road favorite. The Eagles are crippled inside and they just don’t have the horses to compete in this one. Lay the points.

The Bills rode their stellar defense all the way into the playoffs. Can they keep the magic going against Texans’ quarterback Deshaun Watson, who had a career-high 33 touchdowns this season? Buffalo quarterback Josh Allen will manage the game and avoid costly turnovers.

The Patriots are playing a rare first-round matchup. But quarterback Tom Brady knows how to raise his game to another level in the playoffs. The Titans will also be walking into a hostile environment. Titans quarterback Ryan Tannehill has resurrected his career and Derrick Henry has been one of the best running backs in the league. The Pats still find a way.

The Saints are a popular Super Bowl pick and are looking for some vindication after last year’s postseason fiasco. Drew Brees is a steady veteran and he will guide the high-powered offense. Kirk Cousins still has to prove he can win a big game.

The Seahawks missed that first-round bye by an inch in a loss to the 49ers in the regular-season finale. Seattle, however, is decimated with injuries and had to re-sign 33-year-old Marshawn Lynch for their playoff run. Philadelphia has more momentum heading into the postseason and its crowd will be raucous. Still, Seattle will manage to escape with a win.

Name a more iconic duo than the Texans and the early Saturday Wild Card game. Feels like they should be playing the Bengals, doesn’t it? Wagons circled.

The Titans scare me a little. They’ve found some magic with the Henry-Tannehill combo. While Dean Pees facing Lamar does NOT scare me, he has been known to slow down Tom Brady in Foxboro in the playoffs, and that was when the Pats’ offense was actually good. The last time the Patriots played in the Wild Card round was a decade ago when Ray Rice & Willis McGahee ran all over them in a Ravens win. I don’t see a repeat of that. Tom finds a way to send New England to Arrowhead.

The Saints look Super Bowl bound (or at least NFCCG bound). The Vikings look like imposters. So naturally, this will be our big upset of the weekend. Kirk goes off, and a big call goes against New Orleans in the final minutes.

I don’t know what to expect here. Both teams are hobbled. Give me Russ to find some magic.

It seems that every year for the last several years we say that this is the year the Tom Brady gets beat by father time. He will shows signs and they still end up winning another Super Bowl. The Patriots had the benefit of an extremely soft schedule for the first half of the season and both the offense and defense has been exposed since then. The Titans are hot with  Ryan Tannehill,  Derek Henry, A.J Brown and co.

When the Ravens faced both of these teams this season the Bills were a much tougher opponent. However I attribute that mostly to the wind since I was at that game and felt how bad it was. If Will Fuller is healthy or not and plays that could be a deciding factor. Which DeShaun Watson will show up? The one that fell apart against the Ravens or the MVP candidate for most of the season? I think this is a coin toss kind of game.

Someone from the Saints is going to whisper to Kirk Cousins that this is a Monday night game. Game over!! After the Saints heartbreak last year and the way Drew Brees has been playing the Vikings have little to no shot in this game. The Saints are the team I expect to meet the Ravens in the Super Bowl. Mark Ingram will be healthy and ready to remind them why they made a bad choice in letting him go.

— The Titans will give the Patriots a great fight with a strong running attack, but ultimately, Tom Brady and the Pats have one more playoff win left in them.

— A lot of people are picking Buffalo to go into Houston and win, and I’d say that argument carries some weight. The Bills force a few turnovers and Josh Allen simply manages the game to perfection.

— In a rematch of the Minnesota Miracle a few years back, the Vikings simply don’t stand a chance against the red-hot Saints. Look for this one to be over early.

— Many like Seattle, because they’re probably the better team, but I don’t see them going into Philly and winning. Carson Wentz has been an underrated player in recent weeks given his WR corps’ injuries, and he will win on his home turf.