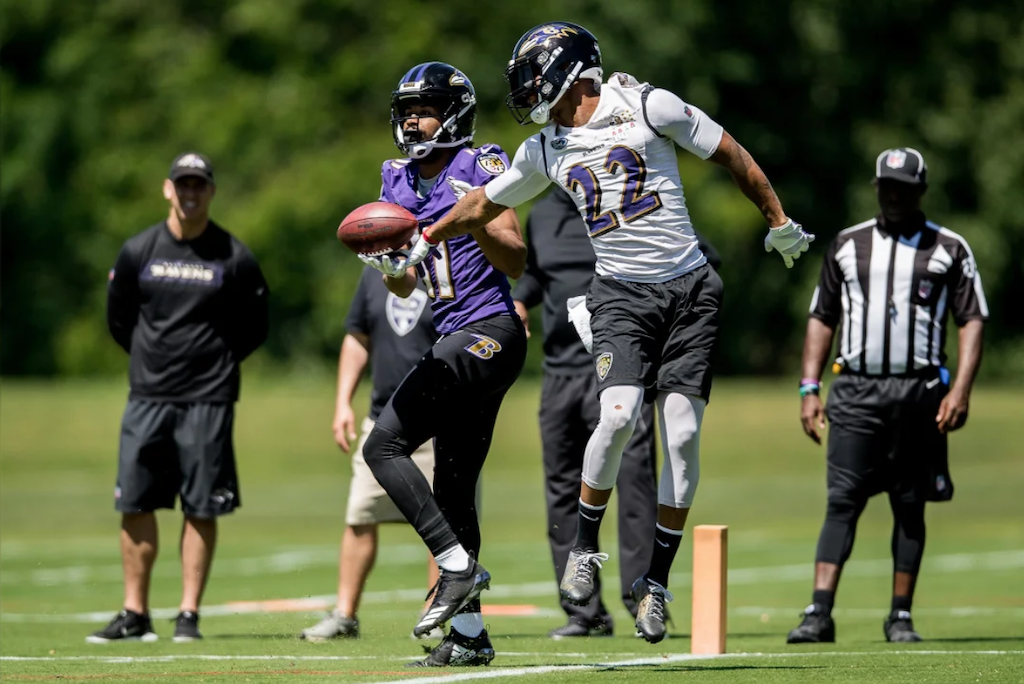 I have to apologize to you people for not chiming in after such an eventful weekend. I had to weave through my timeline and catch all of the shade thrown at me for my Baltimore Ravens getting smashed last weekend in the divisional round of the playoffs by the Tennessee Titans. This was a stinker from the jump as the Titans demolished our Ravens 28-12. There may have been some fetal position crying, deity bargaining, and a few choice words and objects thrown at the television during and post-game. However, there was absolutely none, zero Lamar Jackson Jersey burning!

Any bandy disloyal turd who is done with their jersey, please DM me, and I will gladly donate it to a true fan. After donating, please move on to your next respective bandwagon.

I am probably the biggest fan of the team’s new franchise QB and am excited about the future for the team. With that said, I am pumped that the offense is intact for the 2020 season for the most part. Every year brings the bad news of who is bouncing, chasing the mighty dollar and whose services are no longer needed. I’m going to put together a small list of key players that we have to keep and those who can be shown the door. Let’s start with the keep.

Here are the Unrestricted Free Agents, via RSR’s Brian McFarland: 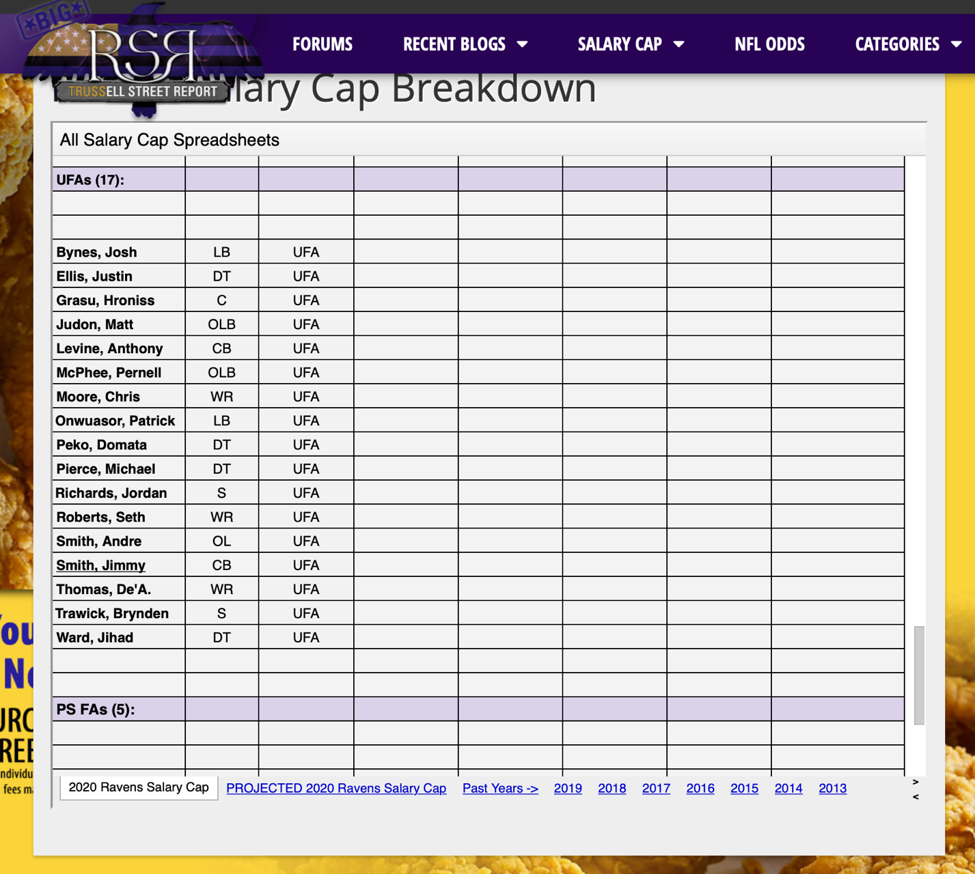 (more at the Salary Cap page)

Looking at this list, I see plenty of wants but not very many necessities. This may ruffle a few feathers of Ravens Nation, but I see only three players we need.

Sure, the guy is getting up there in age, but we let Brandon Carr stick around way past his prime, and got exposed with Carr on the field. Jimmy proved this year that he can still lock his opponents down on the outside. I may be biased because he is one of my favorite Ravens (no matter how much my homegirl Brooke Rouse is fed up with him).

Jimmy had seven pass-defenses and one interception on the season. I believe QBs did not want to try Jimmy on the outside as much as they wanted to try Marlon Humphrey in the slot (17 PDs) or Marcus Peters (13 PDs). Smith’s asking price will more than likely be in the $7-8.5M per year range. With Smith only taking 43% of the snaps according to BR.com, and being in his 30’s now, the expectation is that he takes the pay cut and keeps the secondary strong.

However, with DBs like Anthony Averett and Inman Marshall waiting in the wings as well as Tavon Young returning from injury, retaining the former Colorado Buffalo could prove difficult, especially if he finds starter work elsewhere.

I won’t spend too much time on this guy because I wrote an entire article on RSR recently. I hope to see this guy in purple next season but at the right price. The Ravens are clearly hurting at the OLB position because the team was 21st in sacks (37) in 2019. We want Judon in Baltimore, but he just had a child this week, and he may be thinking about securing that baby’s future more than taking a discount from B-more, and I don’t blame him.

Should he walk, it would be a disappointment, but I believe through the draft as well as asking Tyus Bowser to step up, the team will be fine.

This last pick of all of the lot above may shock you, but I see value here. Bynes may be long in the tooth, but the team really did not pull its act together until after he and L.J. Fort were both signed right around the time the team got molly-whopped by the Cleveland Browns 40-25. Josh racked up 46 tackles, one sack, and two interceptions.

Looking at his current contract and seeing it is basically “1-million dollars” (said in my Dr. Evil voice), offering the 31-year-old triple that should keep him on for another year at least until Chris Board can get his act together.

Now that we have covered who to keep. I believe it is time to move on from these individuals and build through the draft.

I’ve been hearing rumblings about letting Tony Jefferson (who I consider the heart and soul of the defense!) go in order to save $7M against the salary cap. After seeing how Derrick Henry just got his grown man on with the Ravens in the Divisional Round, I would have to disagree. As much as I would like to see the team save money, Tony’s talents and nose for stopping the run is invaluable! Chuck Clark’s skills as a fill-in are very much appreciated. He did a bang-up job. Chuck will still see time because of his ability to deliver the play calls to the team and recognize where everyone is supposed to be. I believe when it is time to say goodbye to Earl Thomas, Clark will be the starter.

Anyway, Tony is safe in my opinion, but Eric DeCosta may think otherwise. We’ll see.

This one should be obvious, as he has been in Harbs’ doghouse for some time now, and rightfully so. You cannot come into camp 400-lbs plus and get kicked out of camp for your inability to maintain your diet. Yes, I’m 187 lbs and don’t know his life but, if someone paid me $3.1M annually to stay in shape, you could bet your bottom dollar I’m spending $400 per month on a personal trainer and $1200 per month on a personal chef.

In 2018, Pierce was a monster and was the better DT out of he and Brandon Williams. Unfortunately, to retain his services even in a down year would cost the team upwards of at least $9M per season. EDC will look to draft younger and hope he can hit on talent at this position going forward.

The return game has been a struggle for years with this organization, ever since Jacoby Jones left. They just cannot seem to find the right fit. I believe moving on from Thomas is a no-brainer due to his lack of ability to produce in the return game. Even Justice Hill outgained the former Kansas City Chief both in yards total (227 to 166) and yards per attempt (18.9 to 16.6). He also made the same bone-headed mistake twice over the last few games, including in the playoff game.

Once again, this is a position the team will either look to bolster via free agency or pull up to the combine with a stopwatch and see what they can fish out of late rounds in the draft.

It’s just time. Time and time again, I have posted my hopes about Chris Moore thinking he’s going to explode on the scene as the team’s top WR. I was disappointed once again in 2019 as he showed up only on a couple of special teams plays. Ever since that Cinci game in college where he destroyed Eli Apple for 221 yards and three TDs on the day, I’ve been waiting for him to tear the NFL up in a similar fashion.

Yes, ST is the way to make a roster…in your first couple of years, but this past season was a “crap or get off the pot” type of scenario and unfortunately, the Ravens need a new butt in the seat. Sorry Chris. He’ll probably join the Bengals and be a top target of Joe Burrow, but it just isn’t working in Baltimore.

There are pieces that may be worth re-signing at a bargain like Jihad Ward or even Seth Roberts, but I don’t see that happening right away. I am looking forward to the magic EDC weaves into this organization in preparation for the 2020 season.