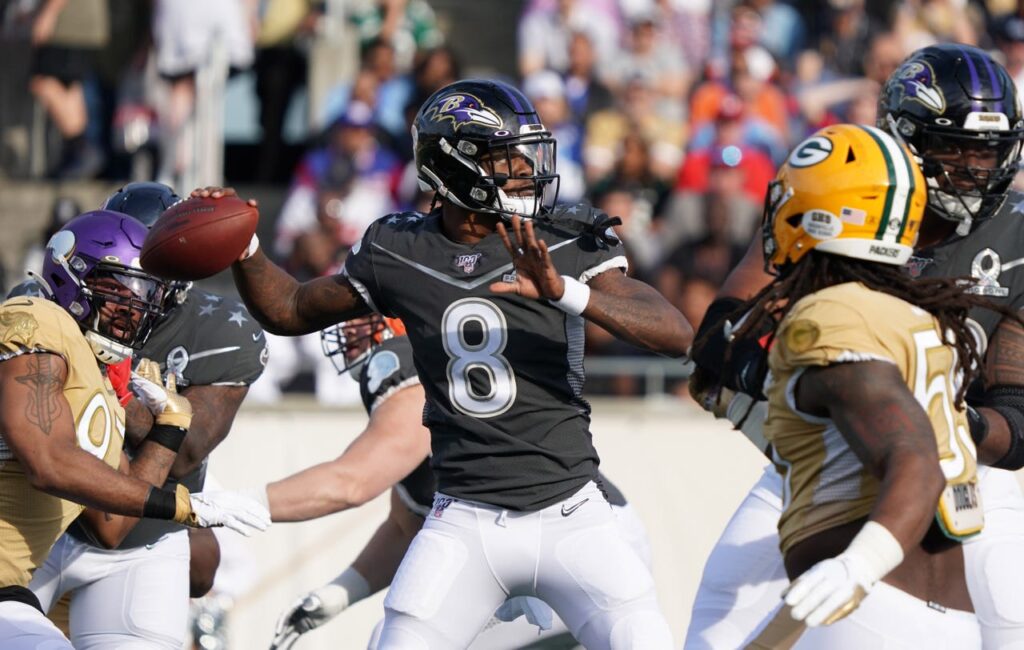 During the skills competition featured this week leading up to the Pro Bowl 2020, Lamar Jackson flopped. He was even out-performed during the passing drills by Browns wide receiver Jarvis Landry. Critics and fans of the Ravens’ rivals swooped in like birds of prey to feast on the carcass of Lamar’s poor showing.

As if it matters…

Some reached out, encouraging me to do a piece on Lamar’s “embarrassing effort”. But what’s the point? Had he posted a perfect outing during the carnival-like event, would it make a difference in how he is viewed by detractors. Wouldn’t they all say that it was a meaningless, made-for-TV masquerade that has no bearing on his play on Sundays?

I suppose you could say that he answered those dissenters of grandeur with his performance during the actual game, as Lamar was named the 2020 Pro Bowl’s Offensive MVP. But that isn’t as important as hitting a bloated dartboard with a football, right?

Truth be told, none of it matters. What does matter is how Lamar performs this coming fall. And there’s little reason to believe that he will NOT be up to the task. His massive physical skills combined with his work ethic and coachability will propel him to new heights.

And on Sunday, should he be officially named the 2019 NFL MVP during the NFL Honors Awards, it will not deter his resolve to improve. His humility keeps him in check and his zest for life keeps him buoyant despite the efforts of naysayers to sink him.

Any fan or any self-proclaimed expert of the game (I’m looking at you Bill Polian) after watching this video, who can’t get behind Lamar, should really take a hard look in the mirror at the person they really don’t like.

[Related Topic: 2020 Officially in the Books]

It’s been said that talented underachievers are a dime a dozen and as such, organized sports will avoid them like the Coronavirus. Conversely, overachievers are relished. They make the most of their God-given abilities and will go the extra mile to be sure that targeted results are not just achieved, but exceeded.

Then there is that rare breed – the talented overachievers. They have supreme natural gifts to ensure success yet they are driven by a rare determination to not only reach, but redefine greatness. Players like Ray Lewis, Tom Brady and Michael Jordan come to mind. Another is Kobe Bryant.

By all accounts from those who know Kobe best, he was a fierce competitor who competed with an uncommon fury even during practice, much to the chagrin of teammates who believed the efforts were often too over-the-top. But that never deterred Kobe. He was determined to be a better player, teammate and leader. How could any team lack effort when the best player on the court was also the team’s hardest worker, giving his all with each possession?

Today while remembering Kobe, his steely-eyed conviction and the sheer strength of his will, I thought about the time he tore his Achilles yet managed to stay on the court long enough to hit two free throws late in a game to tie the score.

Despite the horrific news we learned yesterday of Kobe’s tragic passing, some remain stuck on the mistakes Bryant made in his personal life and they hold it against him. They choose not to see the personal growth, to respect the dynamic changes and instead pigeonhole him into a static den of iniquity. But life isn’t static.

We all make mistakes. Sometimes they become the lessons that fuel personal growth. Sometimes they don’t. As for the Bryant’s, like Kobe always did on the hardwood, they put in the work to improve, to get better, to grow together until they reached a point of domestic harmony. Instead of criticizing him for not initially being the perfect husband and the best man he could be, why not praise him and the entire family for finding their way to a happy place.

My condolences and heartfelt sympathies to the family and friends of Kobe Bryant. It’s been said before but now it bears repeating…

Death may take the body but the mind captures the memories, the heart a vessel to hold our love, and faith, a fountain of comfort that reminds us we will meet again.