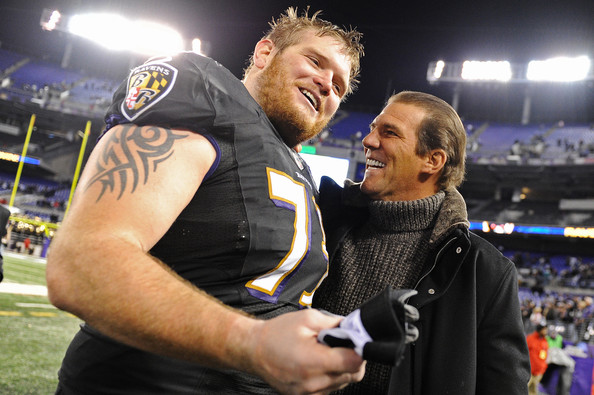 As the game clock ticked down to 0:00 during the Ravens divisional round loss to the Tennessee Titans, the players slowly filtered into the locker room. Initially the scene was morbid. A season that offered so much promise and provided so many unforgettable moments had come to a crashing halt. Hopes were dashed. Dreams of a return trip to the Super Bowl – over!

It wasn’t supposed to end this way for Marshal Yanda. A decorated career that featured 8 Pro Bowl nominations, 2 first-team All Pro selections, 5 second-team All Pro awards and a Super Bowl championship, was promised a little more.

Perhaps there will be another season ahead for Yanda. Despite family appearances on the field before and after games this season that left the impression that 2019 might be his swan song, Yanda might have another season – a farewell tour, left in him.

Moments after the initial uneasy somberness that hung in that locker room, the vibe shifted from desolate to agitated. Players were angry at themselves individually and collectively. They left so many plays out on the field. But it wasn’t just their failed efforts that fueled the frustration. Along with the plays left out on the field, there was also a chippy opponent – one that played dirty. An opponent that the Ravens would love to take another crack at.

But that opportunity will have to wait. And for Marshal Yanda, his chance for redemption may never come.

Or maybe it will.

During the game, Titans defensive tackle Jeffery Simmons was seen jawing with Lamar Jackson. Perhaps the 22-year-old rookie was trying to get into Lamar’s head. He tried again later in the game – literally.

Yanda, normally a calm professional who takes a long view of things, was one of the most unusually frustrated players following the loss. Why? It seems that Simmons spat in Marshal’s face.

“I just want to put [Simmons] on notice, in the media. I’ve never done this in my career,” said Yanda. “There’s a right way and a wrong way to play football, and that guy did not do it the right way today. So, the refs and everybody in the NFL need to put him on notice. Like I said, I’ve never been spit in my face, and I literally got spit right in my face by No. 98.”

A source has also shared that Simmons’ antics didn’t stop with spraying his DNA past Yanda’s facemask.

During the game, Simmons allegedly said a few vile things to Yanda about what he might do to Marshal’s wife and children. Perhaps the head games worked. Maybe Mike Vrabel and his Titans subscribe to the belief that all is fair in love, war and the NFL.

Clearly Yanda didn’t have his best game while Simmons was disruptive, both physically and mentally. Mission accomplished for Tennessee. But Yanda’s thirst for vindication could fuel his desire to return for one more trip around the sun in a Ravens uniform.

Simmons, like former Steelers Joey Bell and Hines Ward before him, may have just graduated to the status of villain, and a marked man in Baltimore. He may have awoken an old rivalry that was dormant for years.

The Ravens host the Titans again during the 2020 season. That just might be a redemption day that Yanda will be unable to resist. And if it is, we can all thank Jeffery Simmons for his contemptible inspiration.