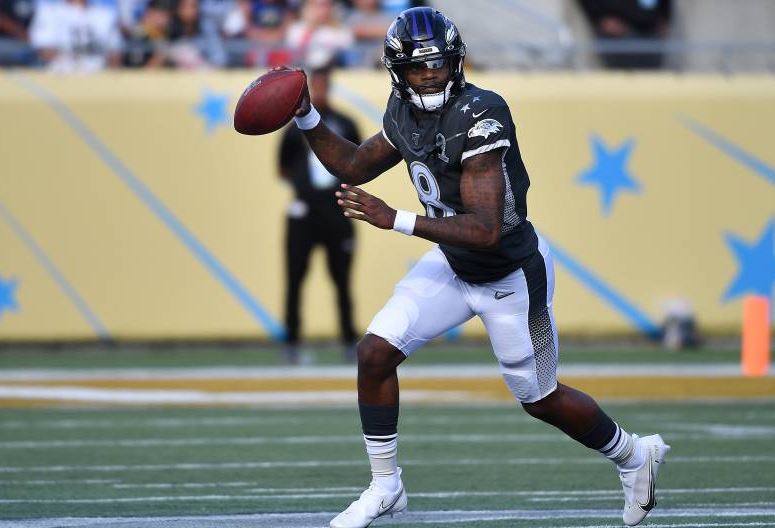 The sudden death of former NBA star Kobe Bryant cast a pall over the 2020 Pro Bowl.

Players on both the AFC and NFC teams acknowledged the shock of losing such an icon at the age of 41.

The game was played and the Ravens players put an exclamation point on the finest regular season in franchise history.

The moment was not too big for quarterback Lamar Jackson, who 16 of 23 for 185 yards passing with two touchdowns and an interception (104.4 passer rating). Jackson helped lead the AFC to the 38-33 victory and was named the game’s offensive MVP.

Jackson didn’t stray too far away from his teammates and found teammate Mark Andrews for a three-yard touchdown pass that tied the game 14-14. Andrews led all AFC receivers with nine receptions for 73 yards.

Another positive sign for the Ravens was the performance of running back Mark Ingram, who was hampered by a calf injury late in the season. Ingram managed just six carries in the 28-12 loss to the Titans in the divisional round of the AFC playoffs. Ingram had a game-high 31 yards on five carries in the Pro Bowl.

On the defensive side of the ball, safety Earl Thomas had a late interception that helped seal the win when Minnesota quarterback Kirk Cousins floated a deep pass on the substitute onside kick rule. Under that proposal, a team that has just scored can opt to run a single play from its own 25-yard line as opposed to attempting an onside kick. If the team gains 15 yards, it gets to keep the ball, and the game continues. If the team fails, the opposition takes over where the ball is downed. The owners and players are still debating whether to keep that rule for regular-season games.

John Harbaugh and his coaching staff led the AFC team.

Many of the Ravens players and coaches were hoping the game would be therapeutic and take away some of the sting from the playoff loss to Tennessee.

“It’ll be fun, and it’ll be a chance for us to kind of maybe heal up a little bit in a great environment,” Harbaugh said about the game.

Team AFC for the win…! It is now Officially offseason 😎

While the players will be able to get some time off, the Ravens front office and coaches won’t waste much time getting back to work and preparing for the 2020 season. Many of the team’s personnel will congregate at owner Steve Bisciott’s home in Florida to begin mapping out a plan in the next week or so.

The Ravens enter the offseason $21.3 million under the league’s salary cap, according to RSR Capologist Brian McFarland.  They must decide if they want to create more space by releasing several veterans, including safety Tony Jefferson ($7 million in savings), offensive lineman James Hurst ($2.75 million) and cornerback Brandon Carr ($7 million).

Yanda told reporters at the Pro Bowl that he is still undecided about returning for a 14th season. The Ravens also must decide whether to sign several unrestricted free agents or perhaps use a franchise tag on a player like Judon.

[Related: An Encore for Yanda?]

Then, there’s the 2020 NFL Draft where the Ravens currently own the 28th overall selection.

One way or another, the Ravens are going to have a different look in 2020 as they try to make another run at the Super Bowl.

“It is going to take scheme, and it is going to take roster improvement,” Harbaugh said. “Our scheme and our roster helped us to be the very best we could be this year, under the circumstances. If you step back and look at the big picture, what we have been able to do as an organization – starting with [president] Dick [Cass] and then [executive vice president] Ozzie [Newsome] and Eric  and his group, and [owner] Steve Bisciotti overseeing and directing us – it has been pretty darn remarkable.”