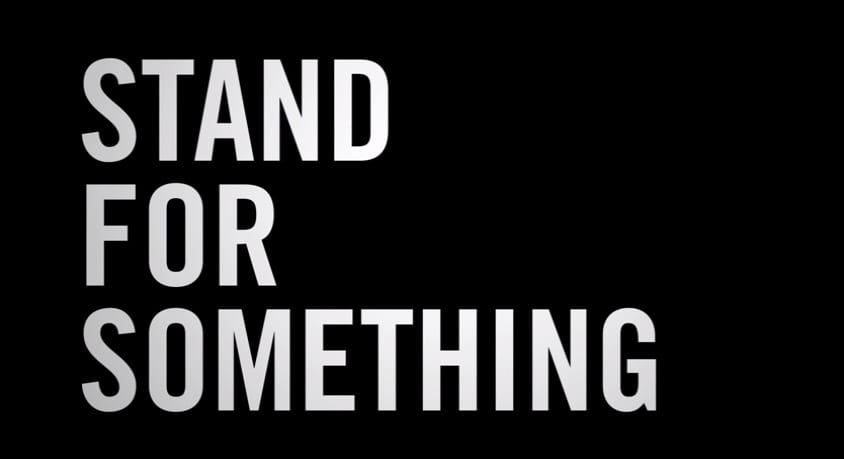 Or You’ll Fall For Anything

There’s a song from John Mellencamp’s Scarecrow album titled, “You’ve Got to Stand for Something” that creeps into the forefront of my thoughts whenever I hold an opinion that contrasts with that of the majority – or maybe it’s the vocal minority. I can never tell.

“You’ve got to stand for something, or you’re gonna fall for anything” is the way Mellencamp’s lyric goes and the older I get, the more I subscribe to this credo of sorts. Maybe it stems from life experiences, both good ones and bad. And maybe as a result, crumbs of wisdom materialize. And I often feel compelled to share them. After all, I am in the opinion business.

The trouble with the opinion business these days is that opposing views can clobber you. And sometimes, it gets nasty. Human nature suggests that one is more likely to criticize or disagree, than they are to praise or show support, particularly on social media. I know that I’ve lost Facebook friends after sharing opinions. Maybe they were never friends at all. Maybe I’ll lose a few more today. If so, I’ll just view it as the opportunity cost of this message.

That said, these days, it seems as if the world is all black or white when most of the time we live in the gray. And that’s ok. The gray is where you theoretically find compromise, although compromise in the modern times is a rare commodity.

Why is it that so many can’t hear an alternative view – that theirs’ is the only relevant perspective and that all others are rendered invalid? Whatever became of listening to varying positions to see things through another’s eyes? Is that so hard? In the end, you may still remain firm in your stance, but at least you’ve objectively vetted the opposing view and perhaps learned something of value along the way that can be of use in the future. You could even strengthen a relationship.

Maybe our elected officials have fertilized the ground for society’s combative behavior. It has become embarrassing. One friend refers to our country these days as The Divided States of America. It’s pretty sad and the only way to change things is to communicate with open-mindedness; to understand that yours is not the only viewpoint and maybe not even the best one.

I’ve learned that during the course of managing Russell Street Report for 16 years. Each day I seek to improve and God knows that there’s plenty of room for more improvement. There are nights when I lay my head down and say a few prayers and reflect upon the day. I regret those moments when I wasn’t my best – that I didn’t do anything to make someone’s day better. I really fret the times when I may have made someone’s day worse.

Full disclosure, when attacked repeatedly after expressing my opinions, there have been times when I can get chippy, and for those who were on the short-end of such emotional reactions, I apologize. These are among the things that add up to a failed day. Instead of reacting, I hope to regularly embrace and share objective responses and opinions. I hope that if you’ve read this far, this qualifies as such.

I do regret that some out there refrain from putting your thoughts on social media due to fear of undesirable retribution. Some don’t want to open themselves up to debating others, and consequently, their thoughts aren’t shared, an indirect form of censorship. In the end, that costs all of us who could benefit from a unique perspective.

The older I get, the more my perspectives on things are fine-tuned, influenced by my own trials and tribulations. Maybe that comes with age. Maybe it’s influenced by my own mortality. I’m a few holes into the back nine of my existence and as such, thoughts of leaving my mark, creating a legacy and leaving the world a better place because of something I contributed, all influence how I want to live the rest of my life. I really do seek to pay it forward.

And speaking of forward, it’s about time for me to move on although suddenly I’m laughing at myself due to a sudden flashback to Jerry Maguire’s mission statement epiphany. You may recall how Jerry undressed (figuratively) before all others and opened himself to professional scrutiny with his mission statement. I have no plan to create bound documents for you all and depositing them in your mailbox like Jerry did, but I do believe that if I’ve convinced just one of you to be more open to healthy discussions when tackling controversial issues, then the time spent to share this was worthy.

After all, you do have to stand for something, right?