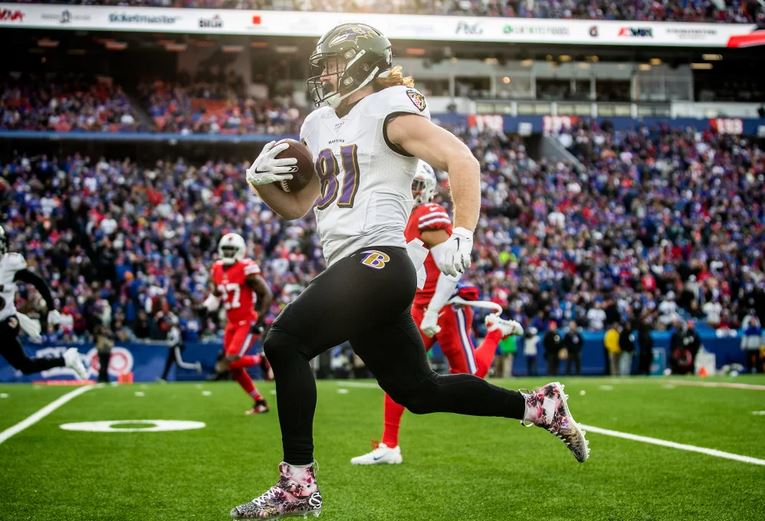 No, seriously. Just hear me out because I know you’ve already clicked on this blog with a ‘oh boy, let’s see what this clown has to say’ mentality. After all, why would the Ravens trade with the Patriots? And why would they trade away Hayden  Hurst, who is going into the 3rd year of his rookie deal?

Let’s take a step back here and address the initial source of all of this chatter, which came from a simple tweet:

Patriots, Jaguars exploring pre-draft trade for @Ravens TE Hayden Hurst, but whether it happens will depend on what draft capital teams r willing to part with. Hurst, who Jags we’re going to draft in 2018 ,told me 2 months ago he wants opportunity to catch more passes. Stay tuned

Before you trash the tweet, let’s give Eugene some credibility out of the gates: he’s a sports writer for the Florida-Times Union, so his pulse on the Jaguars can be respected much more than a tweet from anybody in the fandom throwing speculation into the Twitterverse (he’s also originally from the New England area before his time in Florida, so perhaps his ties back into the Patriots market explain why he feels justified in including the Pats in this tweet).

As a Ravens fan, the first thing you notice is that Frenette claims that Hurst told him two months ago that he wants the opportunity to catch more passes. While I cannot confirm or speak to this discussion between writer and player, I can absolutely understand why Hurst would feel this way; after all, the 2018 1st-round choice is coming off a season where he saw just 41% of offensive snaps (3rd among Ravens Tight Ends), with just 38 targets (3rd), 30 receptions (3rd), 349 yards (2nd) and two touchdowns (tied with Nick Boyle for 2nd).

When Hayden looks across his peers to see a Pro Bowl Tight End in Mark Andrews that many consider a rising star and a top-5 player at his position, along with Boyle, who just got a new deal last offseason and is regarded as one of the best blocking Tight Ends in the NFL?

It’s hard to see those increased opportunities coming in Baltimore.

Rightfully so, it appears teams are calling to see if the Ravens will trade Hurst, and rightfully so from the seat of Eric DeCosta, it will take the right package to move a key role player in the Ravens offense. Alas, I think EDC would be remiss not to listen, both for the sake of bettering this roster by means of picks & players, but also for the sake of Hurst, who truly deserves the opportunity to improve his stat lines, and in turn, improve his value for a potential second contract after his rookie deal expires in two years (or three, should the 5th-year option be exercised).

Lest we forget: Hurst is already 26 & change, and if he were to get his 5th-year option, he’d be hitting free agency in 2023 as a 30-year-old Tight End. He clearly is looking to maximize that deal, which means increasing his production on the field, and I for one do not blame him one bit.

Now that we’ve gotten that out of the way, let’s talk about trade offers that make sense for both Jacksonville and New England, starting with the easy one:

I don’t think the Ravens could get the Jags’ second-round pick straight up for Hurst, simply because it’s top-10 in the second round, and that’s a hard sell for an under-utilized Tight End buried on your roster. I think throwing in a future 5th is enough to make it work for both parties.

Easy. Now, to move onto the more difficult scenario…

Right out of the gates, you’re mad that I’d even consider trading with the Patriots, but I’ve got to ask… why?

For starters, in DeCosta’s first year as GM for the Baltimore Ravens, he sent OG Jermaine Eluemunor and Baltimore’s 6th-round pick to the Patriots for a 4th-rounder, in what many Ravens fans considered a steal. Eluemunor was considered disposable by Baltimore, so to be able to bump that 6th to a 4th for a player that likely became camp cut fodder was genius.

The precedent has been set for the new regime in Baltimore’s front office.

Beyond that, some fans are uninterested in improving the Patriots roster at any capacity, but I’ve got to ask… if you’re taking their first-round pick and keeping them from drafting a top 4/5 wideout in the process, isn’t this trade also hurting them? More so, why are we still terrified of the Patriots? In 2019, we watched Tom Brady battle Father Time to a near draw while the offense in New England became stagnant for the first time in a very, very long time…

Is Hurst changing that all by his lonesome? Are we even sure Brady returns to New England?

Let’s face it folks: the Ravens have bigger, more imposing enemies to worry about in the AFC than New England. Hell, I’d be more inclined to turn down a Texans offer than one from the Pats!

To still scoff at trading with New England, especially for great value in the package Baltimore receives in exchange, is just petty.

Now, let’s talk about the trade potential itself: in essence, the Ravens are trading Hurst to move up 40 spots from their 2nd-round pick, while adding a 4th in the process. To shed some light on the difference in caliber player from 63 to 23, you’re looking at the difference between Hollywood Brown (25th last year) to Andy Isabella (60th).

That’s a huge gap in talent.

For the Ravens to be able to draft two players in the latter parts of Round 1 would be absolutely phenomenal for a franchise that’s merely a few pieces away from reaching the Lombardi once again.

Interior d-lineman Ross Blacklock, then trade back a handful of spots to add another 3rd and then draft WR Brandon Aiyuk?

I can dream, dammit!

Don’t get me wrong: I love Hayden Hurst and still think his ceiling is higher than we’ve seen, but the phrase ‘right player, right price’ doesn’t just apply to free agency for Eric DeCosta’s offseason chess match as he continues to find creative ways to improve the Ravens roster.