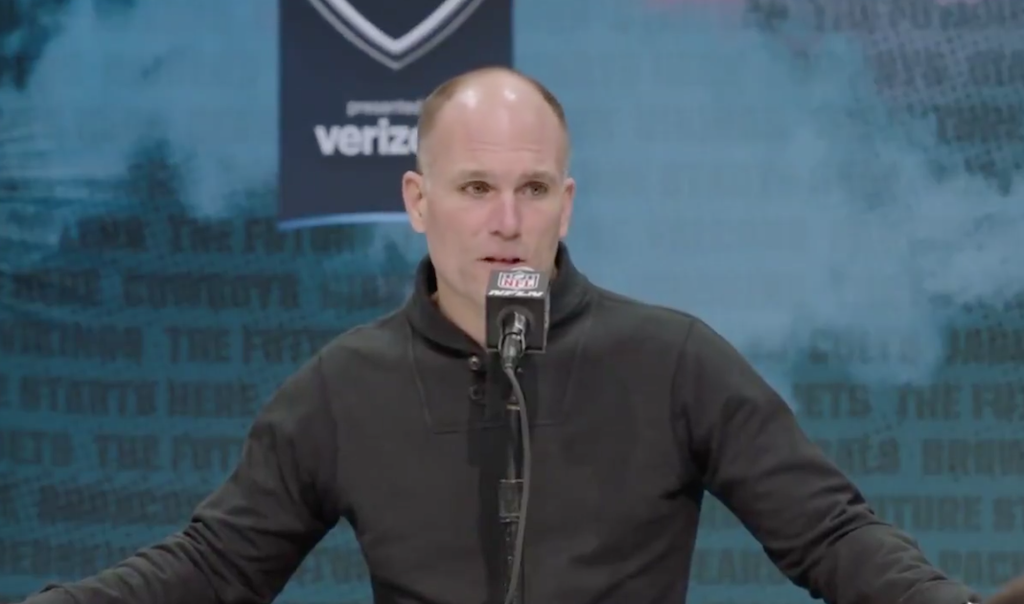 During his first year as the Ravens GM, Eric DeCosta proved that he was ready for the job. He adeptly moved up and down the board while acquiring draft capital during the 2019 NFL Draft. He knew when to strike on trade fronts, understanding when to sell and when to buy as evidenced by the trades of Kaare Vedvik and Marcus Peters. He’s also shown an ability to carefully manage the team’s cap by extending players early with win-win contracts such as those of Justin Tucker, Pat Ricard and Peters.

And recently during his presser at the NFL Combines, DeCosta took to the podium like the highly-skilled team ambassador that he is. Here are a few of the topics he discussed along with my take on his GM-speak:

“I had a great conversation with Marshal at the Pro Bowl. We did not discuss the future.” GM Eric DeCosta pic.twitter.com/GKwZB0QTtK

If you’ve paid attention to videos provided by BaltimoreRavens.com this past season, you might recall a postgame locker room celebration when Yanda picked up DeCosta and playfully twirled him around like a rag doll. The two have a great relationship.

The guess here is that DeCosta already knows what Yanda plans to do. I’ll further guess that he will retire and that DeCosta has asked Yanda to delay the announcement so that it doesn’t reveal another team need during free agency and possibly the draft.

“I suspect that Jimmy [Smith] is going to want to hit the market and assess what his value is, and he probably should.”

Remember all that talk about Smith being open-minded to a hometown discount given how the Ravens have stuck by his side through his injuries and suspensions? Seems as if Jimmy’s definition of a hometown discount differs greatly from the Ravens GM. DeCosta’s response sounds eerily similar to the Ravens stance on an aging Ed Reed when the Hall of Famer was a free agent following the 2012 season. Remember how that ended?

In a related roster decision, DeCosta said that the team would decide upon Brandon Carr’s option when the time comes. That time is March 18th. If the Ravens exercise the option, it will trigger a $1.5M roster bonus and a salary of $4.5M in 2020 for Carr.

That seems like a heavy number for a 33-year old corner. Look for the Ravens to try and drive that number down to a more reasonable number. If the two sides fail to come to terms, the Ravens will take the $6M in new cap space and invest it elsewhere.

[Related Article: The Plan is Coming Together]

Ronnie Stanley is scheduled to eat up $12.9M of the team’s cap unless the two sides can come up with an extension. According to DeCosta:

Signing Stanley long-term will be expensive but stout left tackles are a necessary evil in the league. The Ravens will bite the bullet on this one and lock up Stanley, creating roughly $3M in cap space.

As for any progress on Matt Judon, DeCosta shared:

“We’ve had good conversations with [Matt’s] agents. They’re ongoing, and we’ll continue to see how far that progresses. As far as the franchise tag goes, that’s definitely something that’s in consideration, that’s still on the table. We have some time to go before we make that decision. We’ll have to see how it all kind of transpires over the next few weeks.”

Players hate the franchise tag. Despite the hefty one-year salary, there’s injury risk involved which could impact a player’s future market value and there is no upfront bonus money. The $16-18M salary is split evenly amongst 17 paychecks. It would be shocking if DeCosta doesn’t already have a few trade partners in mind for Judon but a successful trade will require fair compensation for the Ravens edge rusher along with a new contract that Judon can be happy with.

In 5 seasons with the Chiefs, Dee Ford had 30 ½ sacks. In 4 seasons with the Ravens, Judon has 28 ½ sacks. In 2019 the Chiefs were able to secure a 2020 second-round pick for Ford from the 49ers. Considering that the Ravens are likely to receive a third-round comp pick for Judon in 2021 should he sign elsewhere as a free agent, a second-round pick is likely to be DeCosta’s minimum asking price. And that’s how I see it playing out with the team’s 2016 5th-round pick.

The NFL Combines signals the start of the offseason.