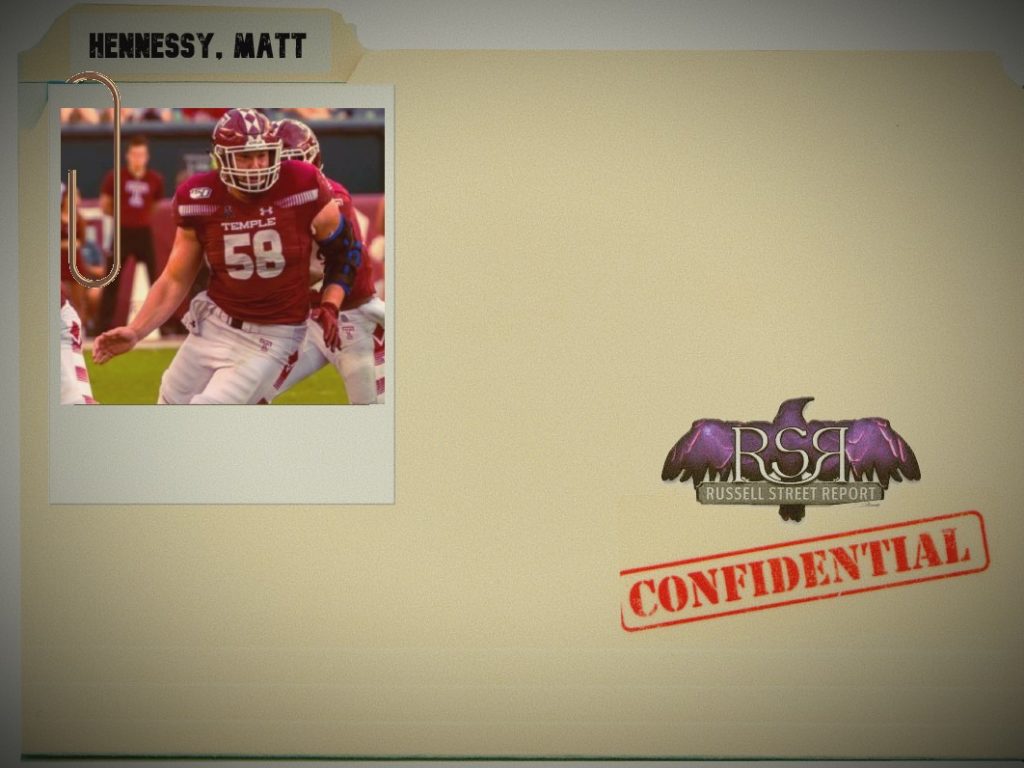 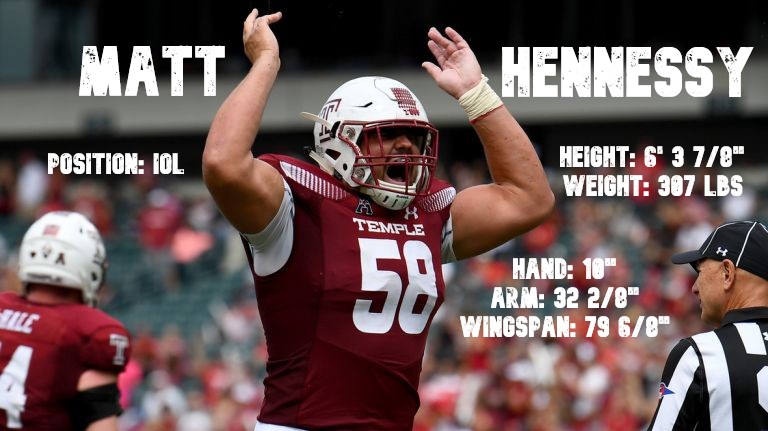 Matt Hennessy redshirted his first year on campus before seizing the starting center job on the Owls OL and holding it down for three seasons with the exception of three games missed due to injury. In 2018 he was given a single-digit practice jersey, which is known around Temple for being awarded to the toughest players on the team.

Hennessy has some outstanding technique, which is thanks in part to his great fluidity throughout his lower body. Reps are consistent with lightning fast footwork and ideal pad level to take on defenders, showing outstanding flex through his hips, knees and ankles to stay low and absorb contact.

His technique is strong in most aspects of his game, including his hand usage, and his hands are a lot stronger than he gets credit for. He gets out in space really well and showed outstanding lateral ability in combination blocks or reaching backside L2 defenders. He pairs his technical abilities with a high play IQ and consistently attacks the appropriate body position, which makes up for his lack of power by making smart blocks that get the job done and maximize his quickness.

In pass protection, he has quick feet to mirror and his ability to stay low allows him to absorb bull rushes. Reportedly comes with the leadership and work ethic you’d want in a guy leading your OL from the middle.

Like most of the guys that come out as quick, technical blockers, you have to wonder about his ability to be scheme diverse. He may be limited to zone blocking schemes where he can use those strengths. He isn’t the most powerful drive blocker despite being the low man on the majority of his reps. He doesn’t have the prototypical length you’d want inside though he does do a good job of masking it with his hand placement.

The fit is an interesting conversation. The Ravens run a mixture of zone and gap runs. Hennessy is a great fit for zone, but he may be a safe fit in the Ravens gap runs given he’ll be blocking down the line to clear out space. While he didn’t show tremendous drive in his blocks, he shows enough leverage and quickness out of the blocks, combined with a strong IQ to get the job done.

A year or two in an NFL weight room and Hennessy may not have any power issues and you have a highly technical and athletic center with enough power to run a diverse scheme. Seems like a good fit.

Pouncey and Hennessy had almost the exact same measurements at their respective combines coming in at 6’4 about 305 pounds and with 32” arms. They both show a strength at running a zone scheme, but are also powerful enough to develop diversity in gap schemes.

Matt Hennessy isn’t getting talked about enough around the league. He is a high level player that shows not only a high floor given his technique and athleticism, but also a sky high ceiling with the prospect of adding mass to his frame and becoming better in drive blocks.