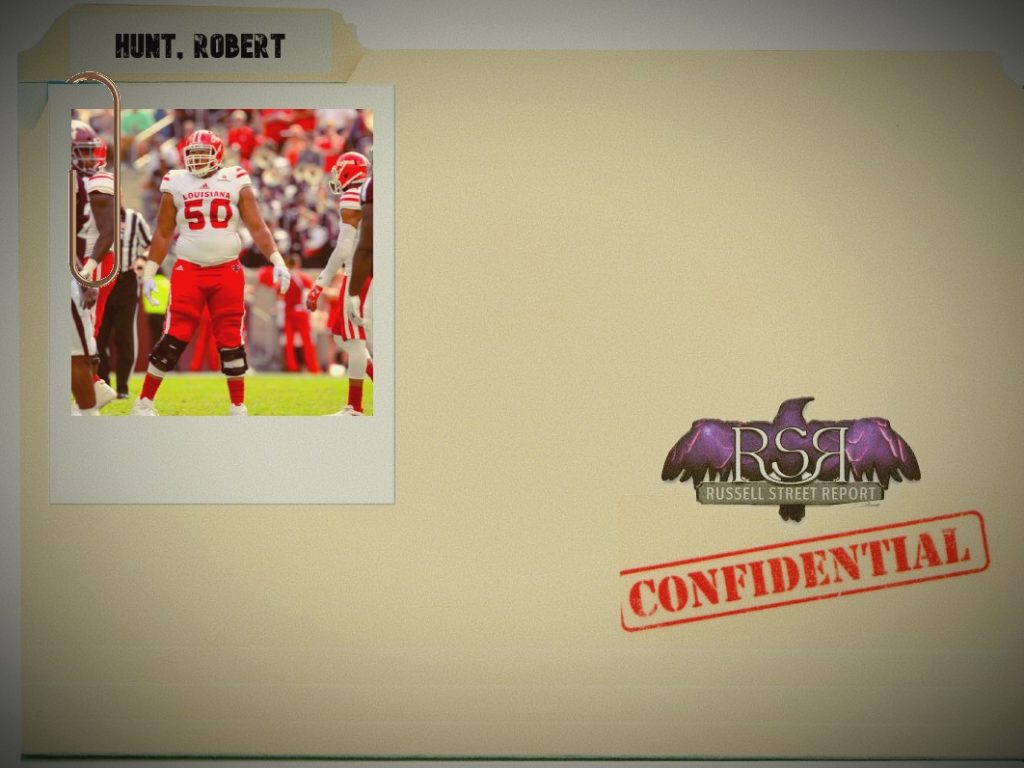 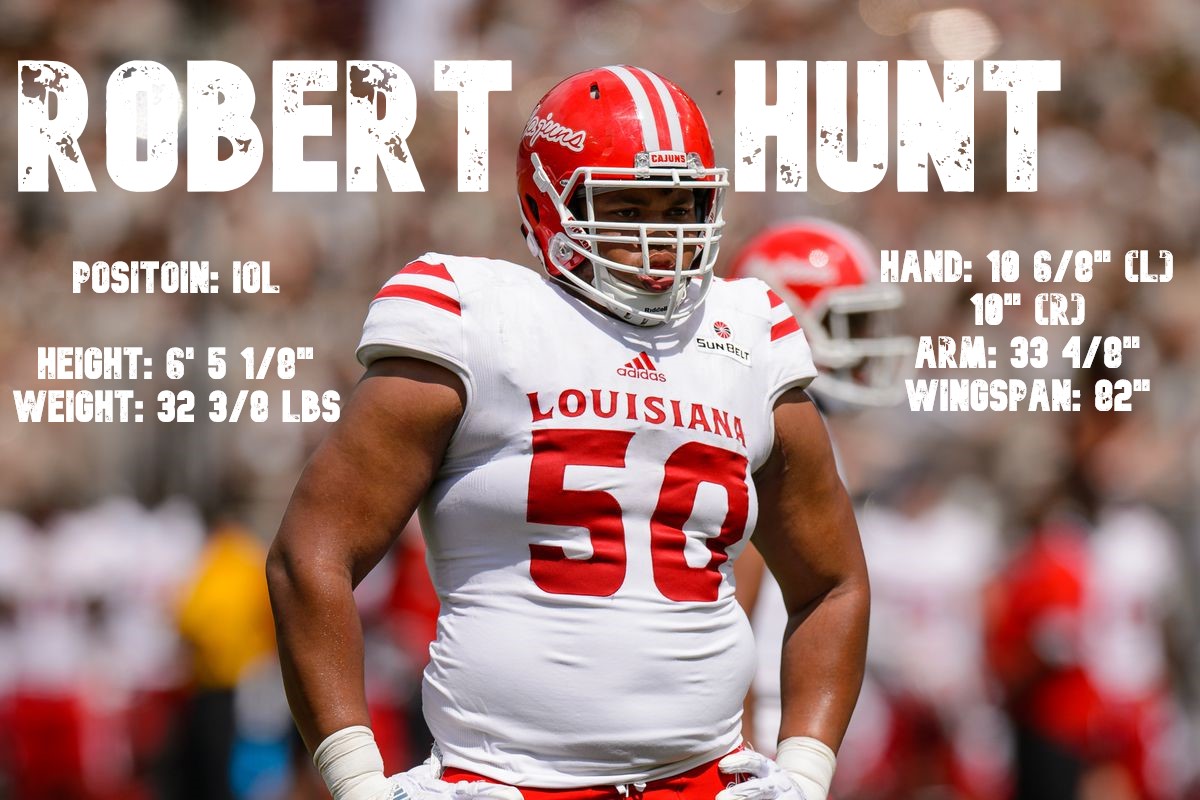 Robert Hunt was a four year starter at Louisiana-Lafayette after his redshirt freshman season. He played LG and LT for the majority of his collegiate career, but moved to RT his senior season. A groin injury cut his season short, but Hunt was still named first-team All-SBC.

NFL teams frequently draft players into different roles and positions than the players played in college. This example comes quite often along the offensive line. Robert Hunt is a solid OT prospect coming out of college, but he looks like an early starter at either guard spot, with Pro Bowl potential.

Hunt is a very good mover, who consistently lands his second-level blocks. The punch/jolt from strong bull rushes knock him back, but he anchors down after the initial contact. Every NFL team will love his effort and blue-collar mentality; he reminds me of Ryan Jensen with his gritty, aggressive mauling style of play.

Hunt looks for extra blocks on most plays and he pancakes players even when it is a bit dirty (has a few block-in-the-back plays on tape). The expected move to guard will be great for Hunt because of the plus-athleticism he already shows on pulling blocks, climbing (second level) blocks, and his quick footwork. He has good length for the position, and uses his long arms well in pass sets by keeping the defender away from his frame.

Hunt pushes the pile consistently, and is excellent at using pivot blocks (inside and outside) to create gaps in the running game. This scheme-versatile player will succeed early in his career.

Hunt does not have many warts on tape. He did not play the stiffest competition, but he shows ability that will translate to the professional field. Hunt’s cut-block attempts were not ideal (though some were solid) and his issues with stunt recognition and blocking communication were alarming (see App State @ Louisiana-Laf, 3rd Quarter-2019). Hunt lands his blocks really well and at a very high rate.

There is a lot to like about Robert Hunt, and a transition to OG should elevate his game.

Hunt can step in as a full-time starter in year one at OG. Yanda’s retirement decision should come very soon, but Hunt’s ability pushes competition and player movement along the line, regardless of Marshal Yanda starting or retiring. Hunt has potential to be a very good right guard or left guard, but that label may not take effect until Eric DeCosta knows Yanda’s plan for 2020.

Hunt is a versatile player, he moves really well on pulling-blocks and he attacks the second level of the defense with ease. Best suited for guard or reserve right tackle, Hunt will dominate from snap through the whistle. I see the lineup playing out, from left to right, as Ronnie Stanley, Hunt, Bradley Bozeman, Yanda/Ben Powers, Orlando Brown.

Greg Roman and Lamar Jackson would be happy with this strong unit going into the season, and the multiple rushing attack that broke NFL records last year could keep chugging along.

Similar to Cody Ford, athleticism, strength, and position flexibility are calling cards for Hunt. Ford had tougher competition, playing at Oklahoma, but Hunt offers some of the same athletic upside that Ford brought to the 2019 O-line class.

Both of these players could be viewed as safer picks at guard, but could develop into starting right tackles.

Robert Hunt is a very intriguing Offensive line prospect. He can be an immediate starter at guard and has room to improve his pass blocking footwork, hand-placement, and leverage. The team that nabs him in the second or early third round will be getting a potential Pro Bowler.