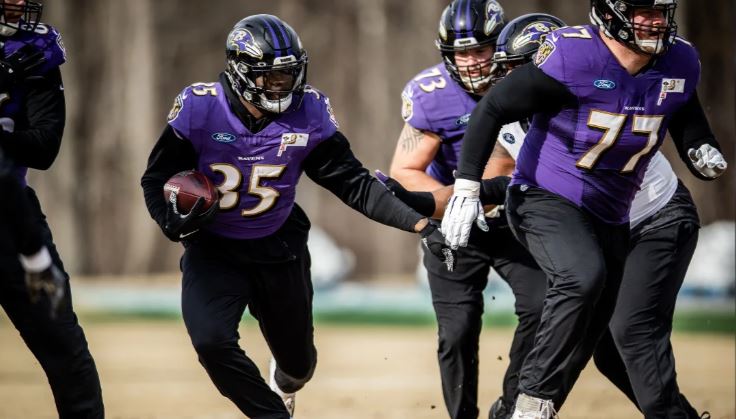 Daniel Jeremiah’s most recent mock draft shocked many in the Flock, as he dropped running back Deandre Swift from Georgia into the Ravens’ lap at pick 28. As a result, there was a noticeable uptick in chatter surrounding the potential for the Ravens to take a running back early in the draft.

Could J.K. Dobbins make sense? What about workhorse Jonathan Taylor? Or maybe waiting until Round 3 or 4 and taking guys like Eno Benjamin, Anthony McFarland (he a Terp!), or Clyde Edwards-Helaire?

The current Ravens rushing attack consists of three and a half studs: Mark Ingram, Gus Edwards, Justice Hill and… yea, I’m adding him.

Folks! This is not a knock on LJ (calling him a running back)! But when your QB carries the ball over 10 times per game? You need to account for him in the run game conversation. Deal with it.

(For what it’s worth, Justice Hill is my ‘half’ stud. I think his trajectory is headed north but he’s not there yet!)

With that core in 2019, the Ravens led the NFL in rushing attempts, rushing yards (NFL record, no biggie), yards per carry, and inexcusably fell to 2nd in rushing touchdowns (weak sauce).

So in the event the Ravens were to take a running back early on, anybody care to guess where those carries are coming from?

Out of the gates, I’m assuming folks are thinking the Ravens need to limit Lamar’s carries per game, but I think ~10 is where Lamar will stay for the foreseeable future. Why would the Ravens take away one of the greatest threats in the NFL? Sure the ‘threat’ of LJ’s legs can be equally as damaging to opposing defenses, but he is pure electric when he takes off, and the loss of those yards surely wouldn’t be surpassed by the yards gained from any running back in this draft…

You can’t really take away any carries from Hill (3.6 carries per game), or Edwards (8.3 carries per game) without effectively eliminating them from the rushing attack. I can’t imagine the Ravens would wave the white flag on Hill after one year when he was just getting used to the offense, nor can I imagine the Ravens would want to kick Gus the Bus and his 5.3 yards per carry to the bench, either.

The alternative to stealing touches from Gus or Hill would be to consider limiting Ingram (13.4 carries per game), which again, seems counter-productive. Ingram is averaging 5.0 yards per carry as a Raven, and lest we forget, he’s the veteran leader of the running backs room, and really, the veteran leader of this Ravens offense (along with Marshal Yanda, who remains in ‘TBD’ status in regards to his future). To knock Ingram’s carries down to backup-lvel in the name of adding a 5th mouth to feed in the run game seems like nothing more than a lateral move in terms of production, at best.

If you’re looking at the NFL Draft with a focus on improving the Ravens offense, you should really be looking at interior offensive line improvements, or adding a true X receiver (I’m a firm believer that Miles Boykin would thrive best as a’big slot’) to complement Hollywood Brown and Willie Snead.

But drafting another running back to add to an already crowded room that produced the top run game in NFL history last season?

You may as well be asking to draft another Tight End…