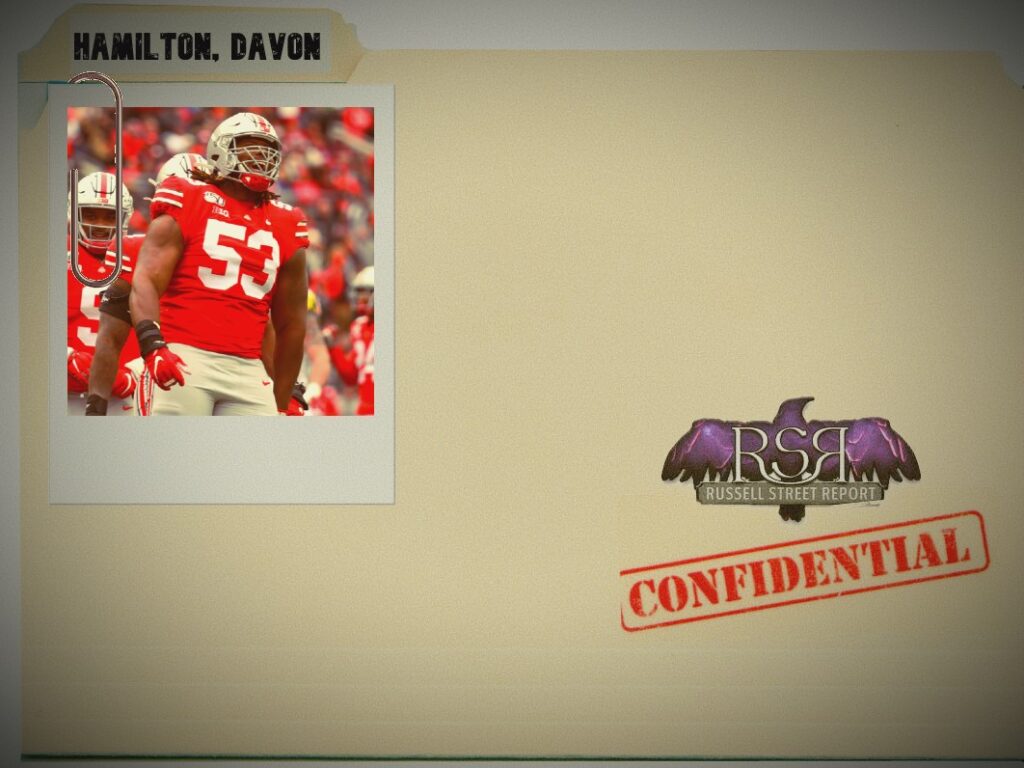 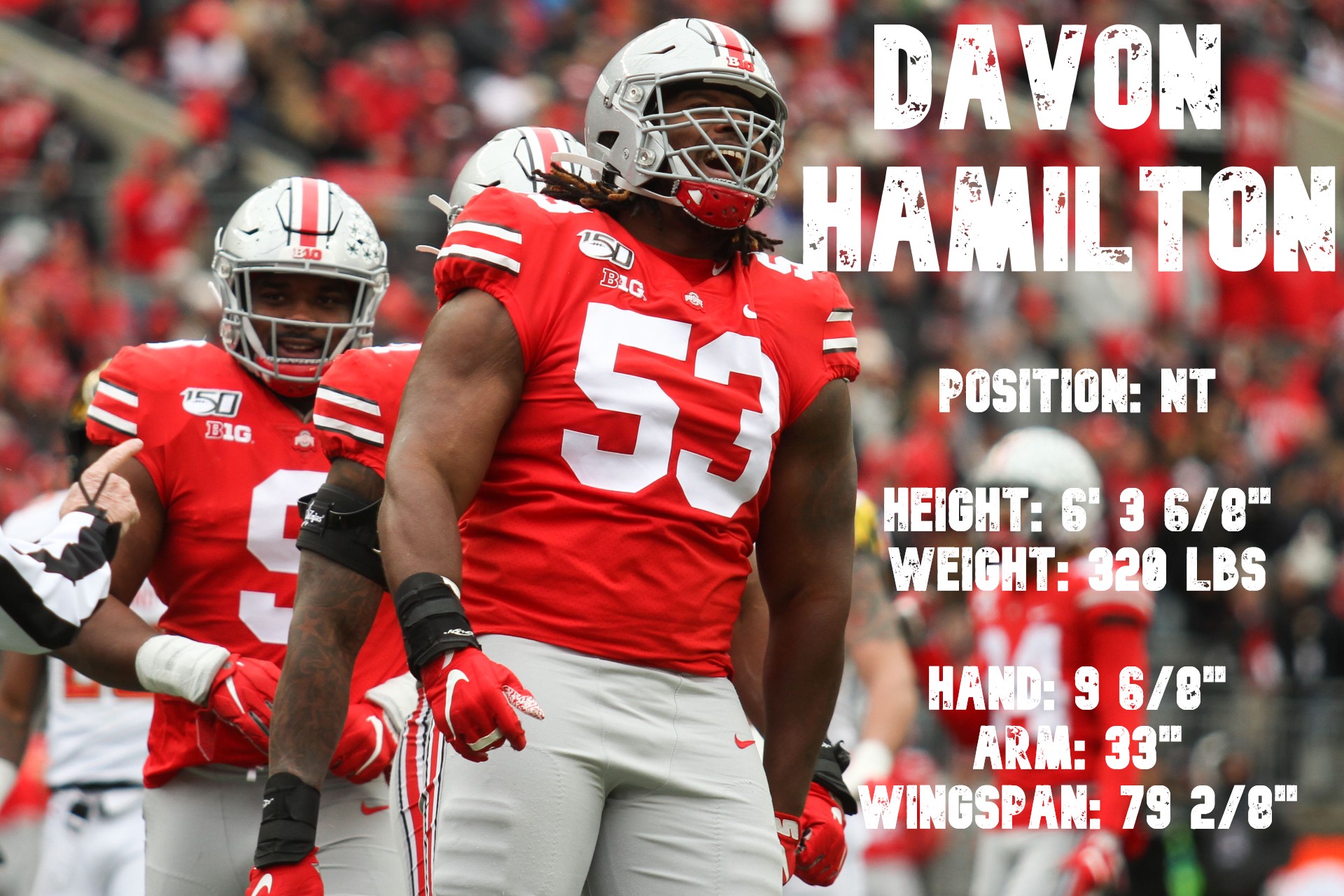 Teams looking for solid defensive line play should look towards Ohio State product, Davon Hamilton. On tape, Hamilton gets double teamed very often, but when he gets one-on-one opportunities, he wins his rep (8/10). Hamilton is a solid two-gapping player that would easily fit into Wink’s scheme. He attacks the running backs well by shooting gaps (on zone-run plays), using his plus athleticism to side-step or jump into lanes, and holds his leverage in the middle of the line.

Placing Hamilton at the nose tackle position (in obvious passing downs) accentuates his power and bull rush moves. He wins in even or odd fronts, but pressures/pushes the pocket best when not double teamed. Hamilton displays strong effort on outside runs and screen plays; he doesn’t have elite athleticism but shows enough sideline-to-sideline pursuit to not be a liability. He clogs running lanes well, but does not produce many solo tackles (28 in 2019).

Hamilton pushes the pocket better than the average run stuffer, therefore he has more to offer on a 3-down basis than many of his counterparts.

Ohio State has become notorious around the NFL for producing budding stars after only one year of starting experience. As much as people like the school or hate it, one cannot deny the talent that comes out of the factory known as “The Ohio State.” Hamilton could be one of the next Buckeyes to see his NFL production far outweigh his collegiate production.

A weakness of Hamilton’s is his lack of experience, but he can mitigate that once he gets a couple NFL offseasons under his belt. Hamilton gets double-teamed quite often, but he loses more of those reps than some of the big guys entering the league (see Leki Fotu). Hamilton gets knocked back and loses balance when doubled by offensive linemen that get running starts (pulls, climbing blocks).

Hamilton has a lot of room to grow as a pass rusher, but as it stands right now, he lacks much of a rush plan. He also lacks a developed arsenal of pass rush counters. Hamilton needs some work on his explosive block shedding technique; this will take his game from a good pocket-pusher to a productive pass rusher along the interior defensive line.

Don “Wink” Martindale loves players with big-time potential, and Hamilton could be the next guy he stands up for (see Jaylon Ferguson 2019). Hamilton has the ability to one-gap (even fronts NT) or two-gap (odd fronts 3-tech) in the Ravens’ defense. He could begin his career in a rotation, but take over a starting role by year three. Hamilton is not the same style player as Michael Pierce or Brandon Williams, but he could offer a good pass rushing presence (on the D-line) that the Ravens don’t currently have. Early in his career he could come in on passing downs, but as he develops he could turn into a 3-down player.

Hamilton, Bowser, Ferguson, (Judon or Free agent), and McPhee/Ward lineup, on third and long, would be an upgrade over the 2019 lineup. The Ravens need some help on the front seven, and Hamilton could be an awesome addition.

Built similarly to Hill, Davon Hamilton has size and length, but slightly-less impressive athletic testing. Hill came into the league with more of a one-gapping role, but Hamilton has the upside of one-gapping penetration with the two-gapping pedigree to clog running lanes and eat double teams. N.C. State’s defensive line was pretty great when Hill played there with Bradley Chubb, and Hamilton had a star edge rusher along the Ohio State line with Chase Young.

Hamilton has much to offer a team with his current skills, but with development he can become a 5-8 sack player/year along the interior.

Davon Hamilton will make an NFL franchise very happy with his stout play in the running game and his potential in the passing game. The defensive line group is solid in the 2020 NFL Draft, and Hamilton is a top eight player. He will be selected between round 2 and round 4.