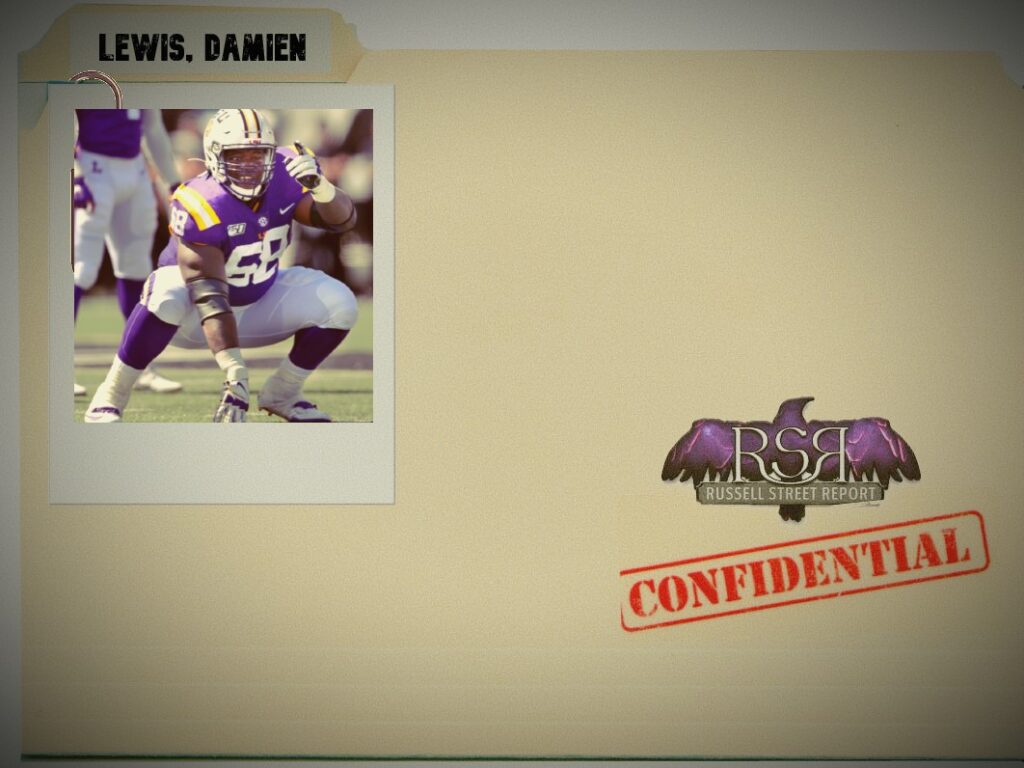 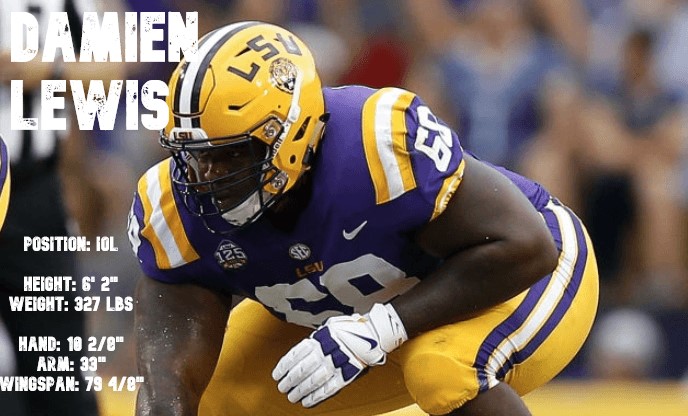 Damien Lewis went the JUCO route out of Canton, Mississippi where he was a top JUCO OL for Northwest Mississippi Community College. Once he arrived in Baton Rouge he took the starting RG reins and never gave them up, starting two straight seasons with All-SEC notoriety.

Despite being short and compact, Lewis brings a good wide base without a bunch of bad weight on his core and chest. His greatest asset is that width, combined with an extremely high level of functional strength. On down blocks he was a freight train and combined with Lloyd Cushenberry on numerous double teams to punish the opposing DL.

He has a strong anchor, and further proof of not carrying bad weight, is his ability to leverage his hips and keep his pad level low to drop his anchor and engage his strength. He also has an extremely high motor – LSU faced a lot of three-down linemen, quarter looks to counter their pass-heavy attack and Lewis was always looking for work and keeping his feet active until the ball was out.

While his hands are strong, his placement technique isn’t very consistent. He held his own against Auburn’s Derrick Brown, but on the reps he lost, he had his hands too high on Brown’s chest plate (sometimes up on his shoulders, given Brown’s pad level is elite) and it caused him to lose balance. I wouldn’t say his balance is bad, but I think he ends up with bad balance as a symptom of poor hand placement.

Lewis is scheme specific. He’s not going to be able to be a productive blocker in a zone scheme and even on pulls, he isn’t going to have great quickness to get out in space if the hole is clear. When he does get out in space he loses his pad level and doesn’t engage through his hips to load up leverage at the POA.

The issue with Damien Lewis is that the Ravens require versatile linemen to execute their scheme that mixes zone and gap power runs. As a RG in the Ravens scheme, there may be enough mauling ability to develop, but the Ravens still ran a healthy amount of zone reads with the dive being blocked as an inside zone to the right (And Lamar Jackson going off the left side if he kept it).

We did see a guy like Bradley Bozeman who didn’t have the greatest lateral mobility succeed and a lot of that is defenders hesitating to read Jackson, which gives guys a step on the offensive line. While it isn’t an ideal fit, it’s still possible to make it work.

Lewis is best suited for a power scheme with a West Coast passing attack. While he has some great power and a hungry demeanor, there’s just too many athletic limitations that are likely going to result in a couple years of seasoning before he has a shot to be a starter.