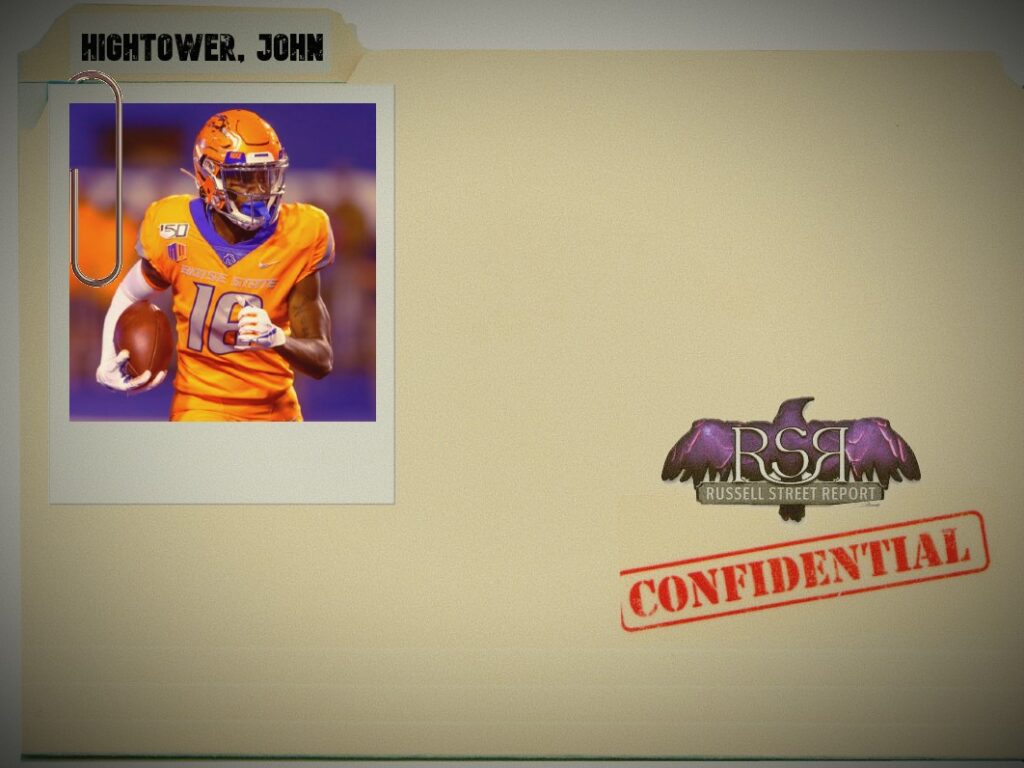 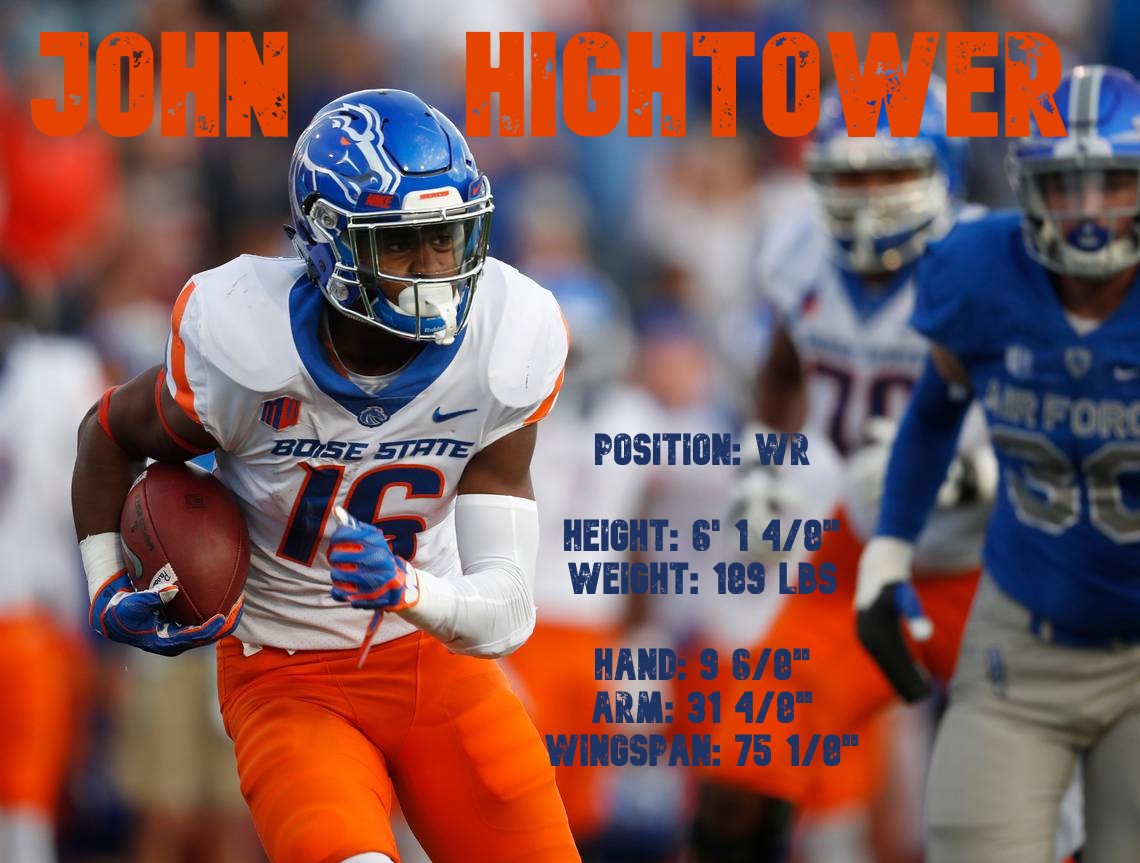 John Hightower attended JUCO in Mississippi for track, but ended up succeeding on the gridiron. He transferred to Boise State in 2018 and began contributing right away (16.3 YPC, 504 Rec Yds, 6 TDs). In 2019, Hightower received second-team All-Mountain West honors for his great season (51 Rec, 953 Rec Yds, 18.5 YPC, and 8 TDs).

Wide receivers come in many different shapes and sizes. Some teams and player evaluators like to think of a basketball team when building a receiving room. John Hightower lands somewhere in the middle of the receiver size spectrum, so he would probably be the Small Forward of the WR group. Hightower has very good linear speed, which helps him win on vertical routes (such as streaks, fades, deep comebacks, curls, post-corners, etc.) and enables separation when there is room to run. He has very solid kick returning ability, but is not shifty enough to be a punt returner. Hightower also wins on drag routes and digs (theme of one-cut and run) and he is used as an end-around weapon and ball carrier from time to time.

Hightower has some unique qualities that make him an intriguing member to a receiving room.

Some wide receivers have great straight-line speed, but not elite quickness or acceleration; Hightower fits this description. He is not very fluid or agile with quick movements, but he wins in other ways. Hightower is yet another receiver that struggles to separate from good press-coverage cornerbacks. Lining him up around the formation will help him avoid some press coverage at the next level; however, he will need improvement in his releases. Hightower also does not show much effort or ability as a downfield run blocker. This is troubling to the Ravens, but is an area that can be worked on and improved.

The 2019 Ravens had an unbelievable amount of success, they had their best regular season of all time (14-2), set the new NFL record for total rushing yards, and were one of the most efficient offenses in league history. One might ask, “how can they improve from such a remarkable year?” A quick, easy area of improvement to point out would be special teams. The return game has not been the same since Jacoby Jones left, but adding a player like John Hightower, could turn things around.

Hightower’s vertical speed and long stride-length reminds me of the beloved Jacoby Jones. In Baltimore, Hightower would become the full-time kick returner, and would integrate nicely into Greg Roman’s offense as a vertical threat. Hollywood and John Hightower could stretch the field (at least threaten safeties on any play) while the TEs and slot receivers work the intermediate middle of the field. Where do I sign, to make this happen?

As I mentioned above, Hightower reminds me of the former Ravens return specialist, Jacoby Jones. While Jones is a few inches taller, I see a similar frame on Hightower and mirroring movement skills. Hightower will not be as special of a return man, as Jones was, but he can be an above average specialist. I give the slight edge to Hightower when comparing his receiving skills to Jones.

When a team selects John Hightower, they will have a shiny new toy at kick returner and will have a vertical threat outside receiver. His deep speed will be put to use early, and he will make a roster right away because of his special teams value. One team will come away with a low-risk, high-reward, valuable player on day 3 of the draft.