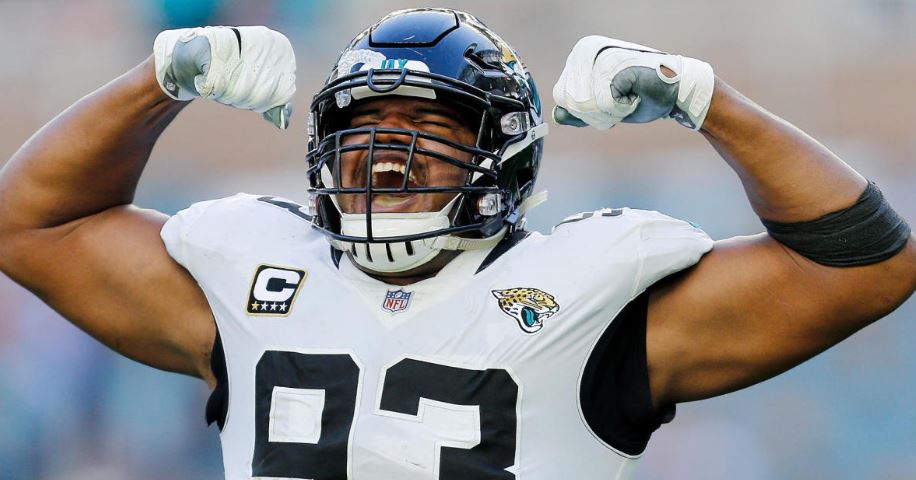 The Ravens and Jaguars have reportedly agreed to a trade that would send Calais Campbell to Baltimore for a fifth-round pick.

Jaguars and Ravens have agreed to a trade in principle that would send Pro Bowl DE Calais Campbell to Baltimore for a 2020 fifth-round pick, per sources. Campbell will try to finalize an extension with Baltimore.

— This deal will solve a lot of issues for Ravens and their pass rush. Campbell has ranked in the top 20 for tackles for a loss in each of the past three seasons.

— DeCosta makes another shrewd deal, but he will have to negotiate a new deal, which looks to be happening already. The heavy lifting is still ahead.

— Campbell has solid numbers would should translate to Baltimore. He 31.5 sacks, 44 tackles for loss, six forced fumbles, and three fumble recoveries over 48 games for the Jaguars.

Having cleaner books have allowed the Ravens to turn two 2020 5th rd picks into Marcus Peters and now Calais Campbell. This feels very reminiscent of the Trevor Pryce signing back in 2006 and while Campbell is older his impact figures to be similar, if not better.

The Ravens needed interior pressure and to acquire a player of Campbell’s stature and still have eight picks at their disposal is a hell of a way to start the offseason.

Eric DeCosta’s magic continues. Campbell for a 5th round pick? This is just the beginning and he’s off to a great start. This was a prediction by many and it’s nice to see it come to fruition.

– This is a huge deal for Eric DeCosta to pull off, essentially exchanging Kaare Vedvik for a Pro-Bowler on the defensive line.

– Campbell should make an immediate impact getting pressure inside, something Baltimore was lacking last year.

– One of the first dominoes to fall this off-season, DeCosta looks primed for a victory lap after last year’s amazing free agency period. I don’t know if he’s done working on the pass rush with Matt Judon franchised as well, but I’m eager to see what his plans hold.

Calais Campbell is a mammoth of a man. He is one of a small group (humans and NFL players) that could go toe to toe with – Game of Thrones “The Mountain.” Campbell is not just a physical freak, he also is a superb defensive lineman. Eric DeCosta hit it out of the park again with this trade and signing! Not many GMs have pulled off this level of swindling; DeCosta literally traded a training camp punter/kicker to the Minnesota Vikings for a 5th round pick, and now he just used that pick to add one of the best defensive linemen in the NFL.

I do not expect anymore big moves, but EDC could have something up his sleeve. Campbell will immediately add a pass rushing presence along the defensive line. His knifing/pocket pushing ability will open up things for Judon (as long as he stays), Ferguson, Bowser, and everyone else.  The one word I would use to describe Eric DeCosta’s time at the Helm:

I can’t underscore how massive the trade for Calais Campbell is. Major, major acquisition. He’s still a dominant interior pass-rushing force. Easily has 2 good-to-great years left. Fills a major need. This was a match a lot of fans/observers thought made sense. #RavensFlock

Already thinking about some of the sub-package rush combinations Wink can employ: he can rotate between Campbell/Judon/Bowser/Ferguson/Ward. Any 1 of the 4 can rush from inside or outside. Add back McPhee & this turns into a dynamic & versatile group even before the draft #Ravens

Eric DeCosta traded Kaare Vedvik, who may not have a job next year, for Calais Campbell.

All honour to his name!

So not only do the #Ravens get Campbell for a 5th, they're also discussing revising his contract. Which means they won't eat the entire cap hit that he currently has.

Put Eric DeCosta in the Hall of Fame right now.