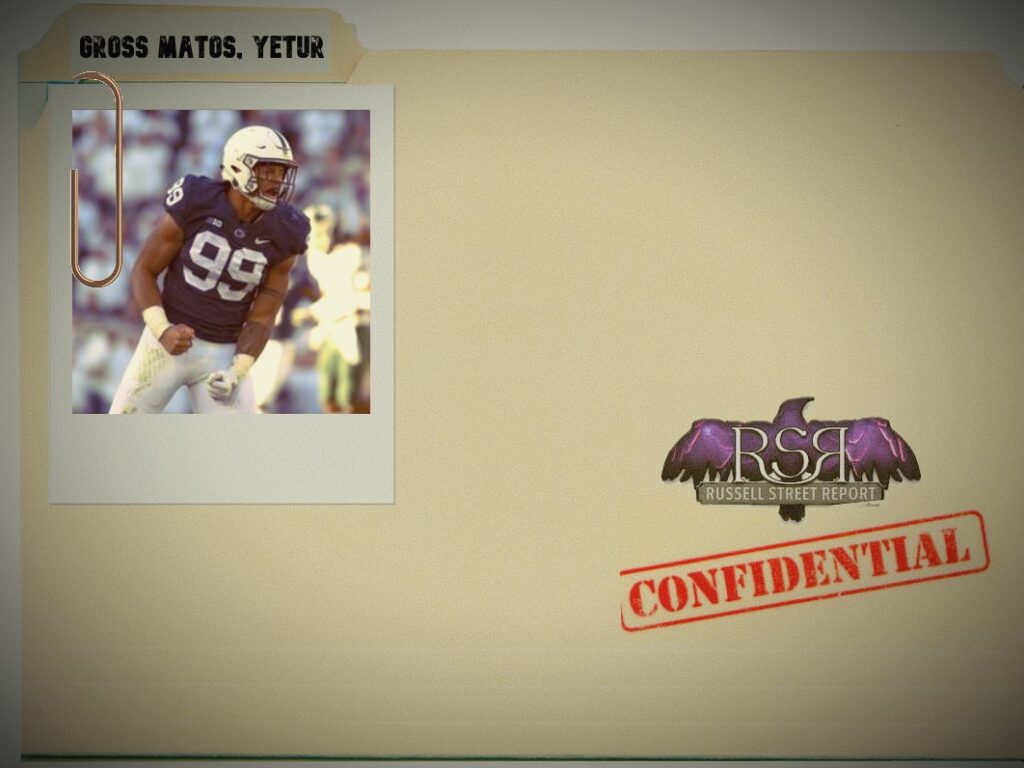 Yetur Gross-Matos is a 6’5”, 266-lb EDGE from Spotsylvania, Virginia. At Penn State, Gross-Matos played in every game during his freshman season before exploding onto the scene as a sophomore. As a junior, Gross-Matos led the team in tackles for loss and sacks on his way to a First-Team All-Big Ten selection.

Gross-Matos is a long, tall EDGE with a high ceiling. When rushing the passer, he gets up field quickly and attacks the opposing offensive tackle. Gross-Matos uses his active hands and long arms to create separation to set up his pass rush arsenal. He has a variety of moves but is at his best when he stuns the tackle with a heavy punch and ducks inside.

Gross-Matos is an asset on stunts and twists. His length gives him the ability to slide inside in sub packages and beat interior offensive linemen with his athleticism.

Against the run, Gross-Matos uses his length to lock out and string the play outside. He is a sure tackler with immense range.

Gross-Matos has an excellent motor and makes plays in backside pursuit.

Gross-Matos relies too much on physical traits to win consistently at the next level. He will need to develop additional pass rush counters to succeed. Gross-Matos could afford to add weight and strength to his frame. His length is an asset, but it occasionally causes him to stand up and lose his anchor against the run.

Gross-Matos was rarely asked to drop into pass coverage and would need development in that area. He lacks true positional versatility.

Gross-Matos’ best position is as a weakside 4-3 defensive end and he may not be a fit for a 3-4 team.

Gross-Matos would play OLB for the Ravens and would likely compete for immediate playing time in Wink Martindale’s defense. Until the time that Gross-Matos could demonstrate a consistent ability to drop into coverage, he would likely be a pass rush specialist.

Given his experience occasionally sliding inside to rush the passer at Penn State, Gross-Matos could earn additional snaps playing a similar role in a Ravens defensive front that is often “position-less”.

Like Gross-Matos, Davenport was a long 4-3 DE with all the tools in college. Coming out of UTSA, Davenport was known for his length and athleticism but had questions about his experience as a small school player and his ability to stand up or drop into coverage. Both players have all the tools to become game changing pass rushers but require some development of their technique.

Like Davenport, Gross-Matos best projects to the NFL as a weakside DE in a 4-3 defense.

Yetur Gross-Matos is long, explosive EDGE with all the requisite traits to be a game-changing pass rusher. With some time in an NFL strength program and some technical refinement, Gross-Matos could be a full-time starter in his 2nd season.

If the Ravens are comfortable with his fit in their defense, Gross-Matos could be an option with the 28th overall pick. He won’t be available to them in the 2nd round.